Samsung Galaxy Note 7 vs iPhone 6S Plus: Battle of the phablets

Samsung has had an impressive run of things in 2016. It started off with the critically acclaimed Galaxy S7 and S7 Edge and it’s finishing off with the Note 7. That’s three phones that all have the potential to be ‘Smartphone of the Year’ candidates in the upcoming TrustedReviews Awards.

In typical fashion, Apple has been much less busy. Aside from the iPhone SE, we’re yet to see much from Cupertino in 2016. That means we’re stuck with the iPhone 6S and iPhone 6S Plus.

So how does Sammy’s latest phablet compare to Apple’s current big-screened king? Let’s take a look. 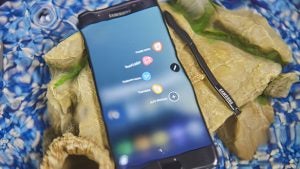 We’d have been laughed out of the room a few years ago if we’d have suggested that Samsung built better-looking phones than Apple. But that’s the truth these days.

Continuing the dual-curved-edge design of the S7 Edge, the Note 7’s display slopes down on either side, and it looks stunning. It catches the eye so much more than the iPhone, which at this stage is starting to look a little dated. Those curved edges also make the Note much sleeker and more manageable to hold than the iPhone 6S Plus, even though the Samsung’s actually the phone with the bigger screen.

The screen bezel is also much more of an issue on the iPhone. Whereas the Galaxy Note 7 keeps its one to a minimum, the bezel is wide and noticeable on Apple’s phone. The thing is, if the rumours about the iPhone 7 are to be believed then that won’t solve this problem either, as both phones are rumoured to look very similar.

With the iPhone 6S Plus, Apple has largely stuck to the same formula that worked so well with the 6 Plus. It has the same aluminium body design and the rose gold colour isn’t as tacky as it sounds.

Other things you’ll inevitably notice are that the speaker, charging ports and headphone jacks are all still at the bottom of the Note 7. The positioning of the volume rocker and standby button likewise haven’t changed, but the Micro USB socket has been switched out for the fancy reversible USB-C type. A first for Samsung.

Fingerprint sensors are the norm now and the Note 7 has one baked into the home button. It’s fast and accurate and the easiest way to unlock the phone. It’s been joined by an iris scanner, a sensor that sits next to the front-facing camera and scans your eyes. 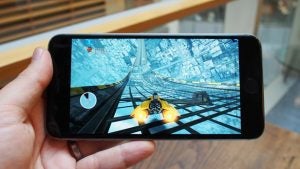 Apple has fingerprint security covered with its Touch ID setup. Both can support mobile payments, with Apple Pay and Android Pay/Samsung Pay, respectively, but the latter has still yet to see a release in the UK.

We mustn’t forget about the S Pen. Samsung’s phone has a stylus and the iPhone 6S Plus doesn’t. Depending on how you feel about scribbling down notes , this might not be an issue for you. The new S Pen is a lot more sensitive than before, making it better for sketching, and like the phone it’s waterproof. Basically, this means you can doodle in the shower.

Note 7 vs iPhone 6S Plus – Performance and Power

Even though the iPhone 6S Plus is approaching its first birthday, it’s still one of the fastest phones on the market. The Apple’s A9 CPU and 2GB of RAM might not be quite as potent on paper as the octa-core CPU and 4GB of RAM in the Galaxy Note 7, but we wouldn’t say there will be much difference in real-world performance. Both will handle all the latest games, intensive apps and the like without breaking a sweat.

A real differentiator between the two is the starting storage. Samsung kits the Note 7 out with 64GB as standard, but Apple still starts off at a pathetic 16GB, forcing you to splash out more for the 64GB and 128GB models. What’s more is that there’s a microSD card slot on the Note 7, meaning you’ll be able to expand that base 64GB further. We doubt there’ll ever be expandable storage on an iPhone. 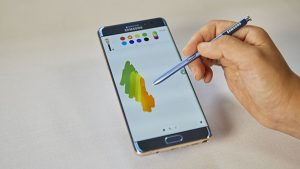 Note 7 vs iPhone 6S Plus – Display

These are two great smartphone displays to use and you won’t be disappointed if you opt for either, but there’s a big difference in terms of pure tech.

The Note 7 has the larger 5.7-inch screen in comparison to Apple’s 5.5-inch one, and the screen-to-body ratio is superior on Samsung’s phone, as Apple goes heavy on the bezel. The display on the Galaxy Note 7 is also much more eye-catching, simply because it’s curved heavily on either side.

The two phones opt for two very different screen technologies, with Apple sticking to an IPS LCD and Samsung using an AMOLED display.

Samsung outdoes Apple when it comes to resolution, with the Note 7 packing a quad-HD panel and Apple sticking to Full HD 1080p. In reality, though, both displays make it hard to spot pixels and you might be hard pushed to tell which is better unless you have them next to each other. For the first time, the display on the Note 7 is ‘Mobile HDR-ready’ which should give you better contrast and a wider range between the blacks and the whites.

One trick the iPhone 6S Plus does have is its 3D Touch tech. This is a pressure-sensitive layer built into the display that reacts differently depending on how hard you press it. Hard-pressing on the camera icon, for example, can take you straight to shooting a video or a selfie. 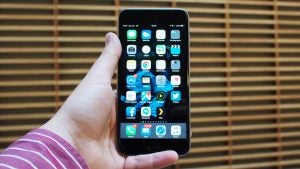 While we haven’t spent enough time with the Samsung Galaxy Note 7 to really judge its snapper, due to it having the same setup as the Galaxy S7 we can assume it’s going to be fantastic. The combination of a 12-megapixel Dual Pixel sensor and f/1.7 aperture makes it the best phone camera on the market, while the 5MP front-facing camera is only beaten by the HTC 10. It’s a potent combination that also features 4K recording, slow-motion video and a boatload of extras.

The iPhone 6S Plus also has a great camera, again with 12 megapixels and 4K recording. Apple’s cameras tend to be more colour accurate than Samsung’s, with less post-processing and a cleaner, more lifelike look.

Optical image stabilisation is present on both, a vital feature for keeping low-light shots steady, and both have a fairly run-of-the-mill flash. 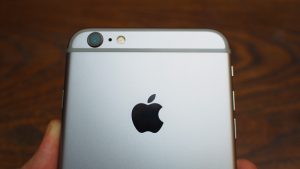 Note 7 vs iPhone 6S Plus – Software

iOS vs Android – it’s the age-old debate in the phone world. (Well, since 2008 anyway.) We’re not going to get into the nitty gritty here, but suffice to say both have their benefits and problems. iOS is great if you’re committed to the Apple ecosystem, while Android offers more customisability and deeper integration with Google’s massive selection of services.

Like every other Galaxy phone, the Note 7 uses Samsung’s own overlay on top of Android 6.0.1. This skin is a bit Marmite – you’ll either love it or hate it – but it’s the best it’s ever been. Note 7-exclusive features mainly revolve around the S Pen, so you can take notes when the screen is off or translate some text while hovering over it.

There’s also the Secure Folder, which keeps personal items locked away behind either a scan of your eyes or a fingerprint. It’s a nice touch, and one that we’re sure a lot of people will take advantage of.

Related: How to unlock an iPhone 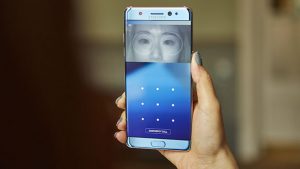 The iPhone 6S Plus ships with iOS 9, but it’ll be updated to iOS 10 when it launches later in the year. This is a big step forward, with a new lock screen, updated widget support and a bunch of new features. It’s still very much the iOS we know, just tweaked. It’s free too, so gives the iPhone 6S Plus a new breath of life just as the new model launches.

Big phones should deliver much better battery performance than their smaller counterparts, as there’s much more space to jam in that extra capacity.

Keeping the Galaxy Note 7 chugging along is a 3,500mAh cell, which is actually smaller than the one in the S7 Edge, but larger than the 3,000mAh cell in last year’s Note 5.

Interestingly, the cell inside the iPhone 6S Plus is marginally smaller than the one in the 6 Plus – it’s dropped down from 2,915mAh to 2,750, but thanks to a more power-efficient chip and all those battery improvements in iOS 9, it lasts about the same amount of time as its older brother.

The iPhone 6S Plus had great battery life when we first unboxed it, but months later it’s starting to drop. While it’ll still get us through the day, it’s dropped about 20-30% over 9 months. 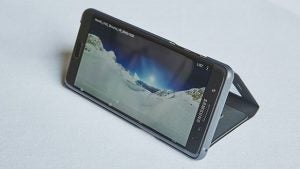 We haven’t had enough time to fully test out the battery on the Note 7, but you’ll be happy to hear it’s fully loaded with extras. There’s wireless charging, fast charging and it’s the first Samsung phone to use USB-C.

These are two great phones, but hard to compare, as they’ve come out at such different times. Both are pricey, high-powered phones, but the Note 7 is the newer model and as such has many more advancements than the iPhone 6S Plus.

We’ll have to spend more time with the Note 7 to really see how good it is.

Which phablet reigns supreme, Apple’s iPhone 6S Plus or Samsung’s new Note 7? Share your thoughts in the comments below.