Samsung has announced its long-awaited Infinity Flex display, a fully-foldable mobile display that will underpin a new generation of smartphone and tablet designs.

However, in a disappointing development for those who were hoping to have this device in their pockets within months, a consumer ready Galaxy F handset was absent during the SDC keynote on November 7, nor did we see the Galaxy X

Regardless, the functional display technology looked mightily impressive. It combines a cover display showcasing a traditional grid of apps, with a fold out 7.3-inch screen (pictured). In tablet mode the device shows the currently open application, expanded across the breadth of the device.

Samsung also says, thanks to the One UI also previewed during SDK, the Infinity Flex display will be capable of showing up to three apps simultaneously. When closed the device can be used like a smartphone and can still fit comfortably into a user’s pocket (below).

Here’s what Samsung has to say: “Users now have the best of both worlds: a compact smartphone that unfolds to reveal a larger immersive display for multitasking and viewing content. The app experience seamlessly transitions from the smaller display to the larger display as the device unfolds. In addition, users can browse, watch, connect and multitask without losing a beat, simultaneously using three active apps on the larger display.” 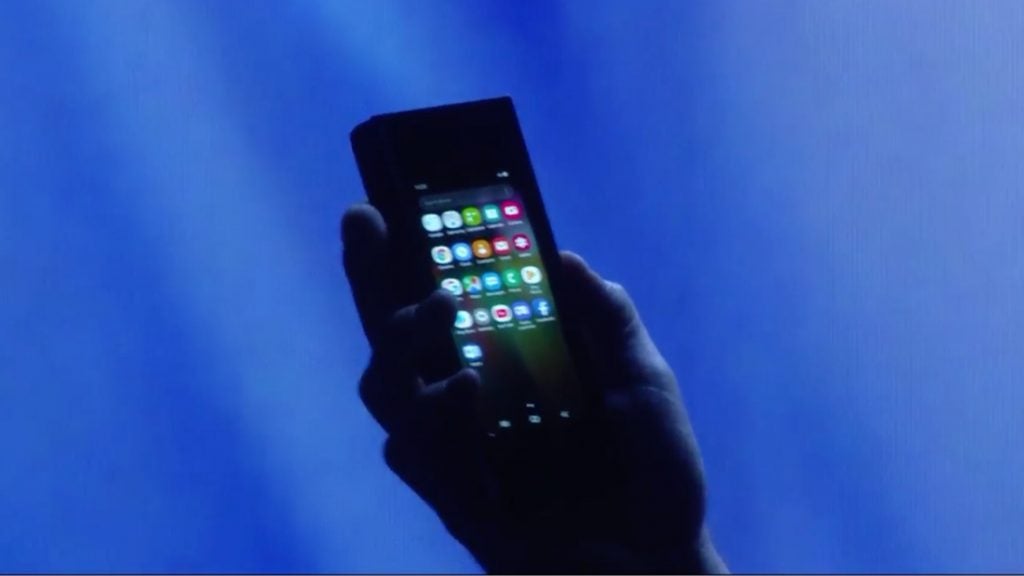 Samsung said it has reimagined a number of existing technologies and defied conventional display wisdom to create the new display, which is strong and flexible enough to be folded hundreds of thousands of times during the life time of the device. For example, Samsung says it has reduced the thickness of the polariser by 45%.

During the unveiling, Samsung said the Infinity Flex display is the foundation for the future of the smartphone, prompting an appearance form Google, which promised support for the foldable phone framework within the Android ecosystem and the Google Play Store.

However, many observers had hoped the production ready Galaxy X/Galaxy F would be unveiled during the keynote. In fact Samsung itself had heavily hinted the device would be ready to go come SDC. That wasn’t the case.

You can see the unveiling from about 1:23:00 in the video below:

Samsung did say the display technology is ready for mass production within months and promised more information at the next Unpacked event, which is likely to take place in early 2019 when Samsung launches the Galaxy S10.

Perhaps then, Samsung will finally announce the Galaxy F/X smartphone with a solid release date for consumers? However, given the prototype still looked a little chunky, the bezels were significantly larger than we’re become accustomed to, and there was no news on the display resolution or pixel density achieved by the Infinity Flex, a release may still be a while away.

When the Galaxy F does arrive, it’s likely to be a little more refined than what we saw today.

Were you disappointed not to see the Galaxy F in all its glory? Or blown away by Samsung’s Infinity Flex innovation? Let us know @TrustedReviews on Twitter.