Rumours of Samsung ditching the Home button on the Galaxy S8 just received a major credibility boost, and it’s all thanks to a new fingerprint scanner technology.

Biometrics giant Synaptics has just announced the Natural ID FS9100 optical fingerprint sensor, which can scan your fingerprint through 1mm of “full cover glass”. This is important, because it means that rather than having to embed a scanner in a physical button, as is the case with the Galaxy S7 or iPhone 7, phone makers will be able to hide the scanner underneath the glass on the front of a handset.

Samsung has long been tipped to abandon the Home button on the Galaxy S8, and instead embed the technology on the lower part of the front of the phone. This means we could see significantly smaller bezels on Samsung’s next phone, if it features the new Synaptics sensor – the “all-screen front” tipped by Bloomberg might actually happen.

Importantly, Samsung has used Synaptics fingerprint sensors on previous flagship smartphones, including the Galaxy S6, Galaxy S7, and Galaxy S7 Edge. So there’s a very good chance that this new sensor will make its way to a future Samsung smartphone. 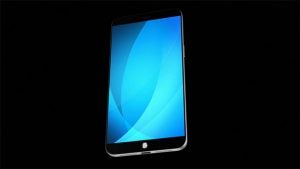 Synaptic describes the new sensor as excelling “with wet finger performance”, and says that it’s durable, scratchproof, and waterproof, by virtue of its under-glass design.

Optical fingerprint scanners have existed for a while, but this is the first time we’ve seen one available for a smartphone. Previously, it wasn’t feasible to include the scanners in phones due to their large size and high power consumption. But Synaptics says that it’s managed to create an “extremely thin form factor” and promises “minimal power consumption” to boot. Anthony Gioeli, VP of Marketing at Synaptics’ Biometric Product Division, described the sensors as “a new breed of optical fingerprint sensor technology” that would meet the needs of future mobile devices. He added:

The only potential reason why we may not see this Synaptics sensor in the Galaxy S8 is due to the release timing. Synaptics says that the new scanners will be available for manufacturers to sample in the first quarter of next year, with mass production slated for the second quarter. But recent rumours have suggested that Samsung could unveil the Galaxy S8 as soon as February 26, to coincide with Barcelona’s annual Mobile World Congress tradeshow.

That said, Samsung could potentially announce the phone in February, and then delay the handset’s actual release until the second quarter, which could allow for the sensor’s inclusion. However, we’re not entirely convinced by the possibility of such a delay. With the Galaxy Note 7 recall still hurting the company’s bottom line, Samsung will be keen to get a new flagship on store shelves as soon as possible.

However, some reports suggest Samsung may be taking extra time with the Galaxy S8 to ensure there are no recall-worthy faults, which could mean a delayed release.

Unfortunately, we won’t know anything for certain until the official announcement.

What would you like to see from the Samsung Galaxy S8? Let us know in the comments.