Tim Baxter President and CEO of Samsung North America started proceedings with some warranted boasting about how well Samsung is doing. A whopping $14 billion in research and design was spent just last year, he explained.

Samsung is investing heavily and aims to become a leader in not just hardware, but also software.

Bixby and SmartThings get smarter

President and head of CE Samsung Electronics HS Kim took the stage and spoke about the Internet of Things (IoT) that we’ve been hearing so much about for so many years at CES.

And he’s speaking some truth. IoT is hard for the consumer. It requires multiple apps, passwords and hubs to get things working smoothly. From Spring 2018 Samsung will be joining all its separate apps to just one, called SmartThings. 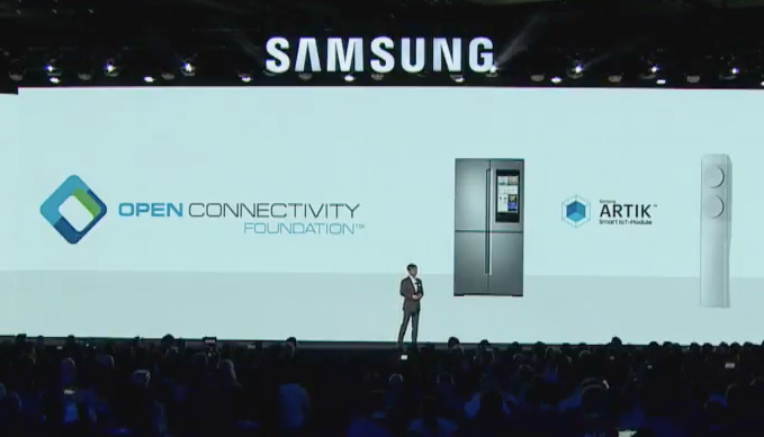 And it’s not just Samsung products that will be invited to the party. Samsung is part of the Open Connectivity Foundation so any SmartThings compatible product will work with the app, not just Samsung ones.

Artificial intelligence is next on the agenda. Bixby, Samsung’s smart assistant, is being taken to the next level. “By 2020 all Samsung devices will not only be IoT ready, they’ll also be intelligent” explained Kim.

This will all be powered by heavy investment in AI, all with the aim of offering less complexity, but more simplicity.

Joe Stinziano, Executive Vice President America, is next on and is talking about TVs.

All new Samsung TVs will come packing Bixby, and this means that the TV will become the hub of the smarthome, the place where you can control every smart product in your home. 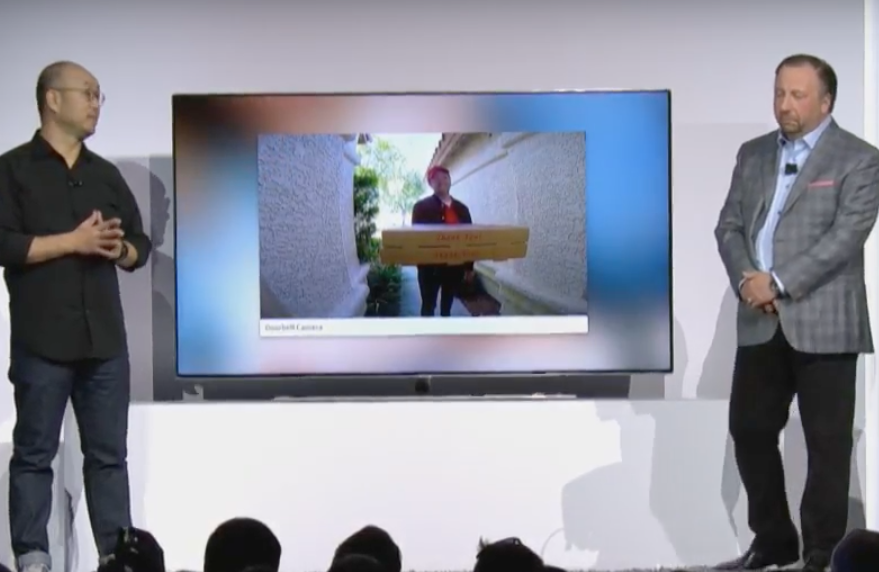 Samsung has become the world leaders in refrigeration and the Family Hub fridge freezer will now come packing the Bixby voice assistant too.

If you haven’t seen the Family Hub then imagine a fridge with a giant tablet attached to the door. It costs thousands, but there are 18 versions of the Family Hub fridge coming, so we hope to see some more affordable versions in the future.

Some slick demos showed off how passwords are eliminated and how the Smart Hub interacts with other smarthome products like smart doorbells or baby monitors.

Samsung has already signed up a leading European car manufacturer to its 5G telematics smart car solution, but we won’t have to wait for 5G to see it. It will be available over 4G networks until 5G becomes mainstream.

TVs as big as your wall

We saw Samsung’s Micro LED TV technology yesterday. It brings loads of clever new tech but one of the most interesting is that it’s modular. That means you can join multiple panels together to make screens that can take over an entire wall. 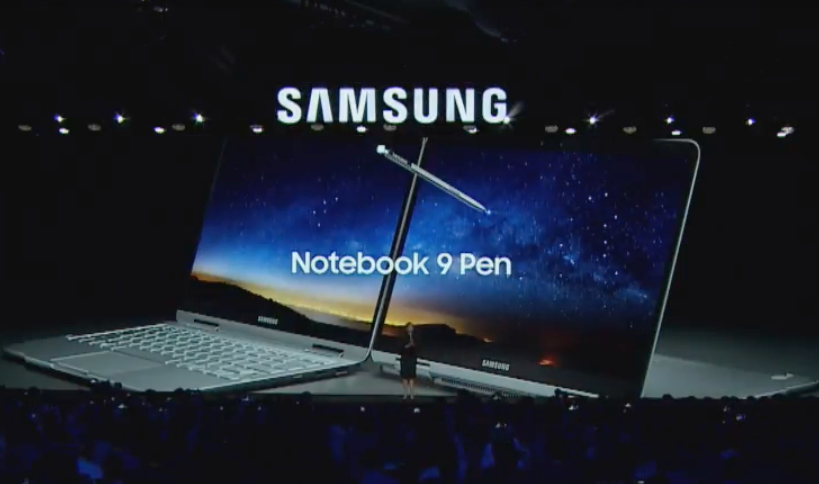 It wasn’t just TVs and home appliance at Samsung’s CES 2018 press conference. We were introduced to what looks like a stunning new laptop.

The Samsung Notebook 9 Pen weighs just 1kg and comes with a 360 degree hinge and, Samsung claims it’s both premium and durable.

The Notebook 9 comes with an S-Pen, just like the Galaxy Note 8, so you can draw and write. No information was given on specs, but we’ll be sure to find out more when we get our hands on it. 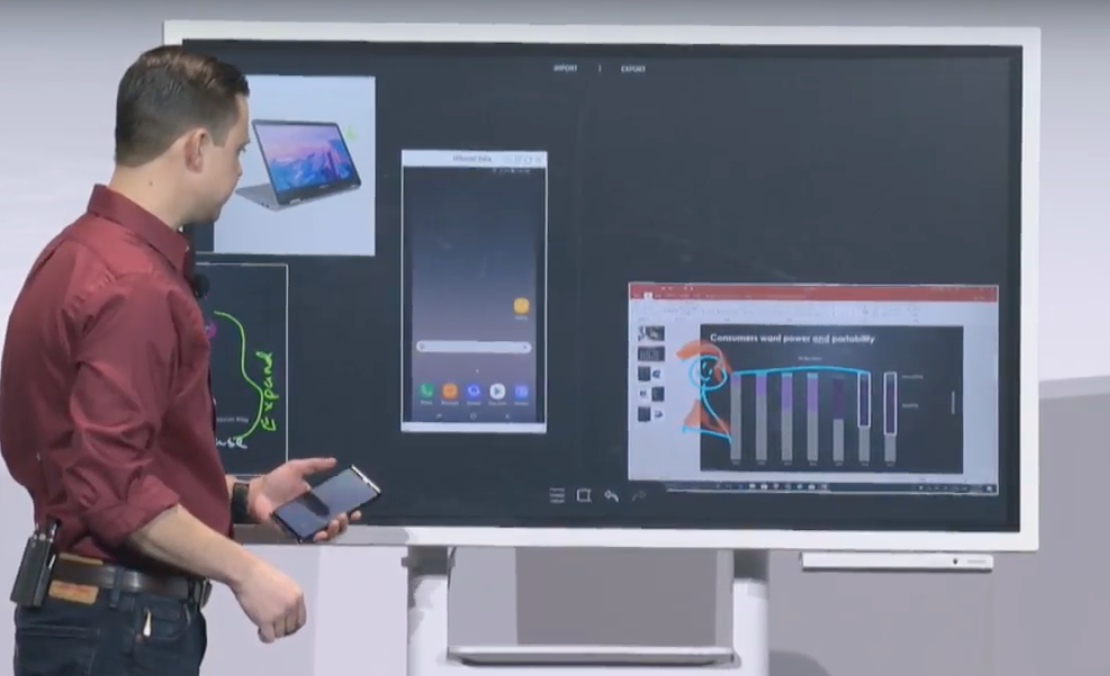 Perhaps the most unexpected unveiling was the Samsung Flip.

The Flip is a smart, portable whiteboard that is fully connected. It flips from landscape to portrait easily, connects to smartphones and digitises everything, so no more taking a bunch of pictures of paper for someone to write up later. This could be the ultimate executive office toy.

What else is Samsung announcing at CES 2018?

Ahead of it CES 2018 show, Samsung unveiled a few products we’ll likely see showcased in more detail. There’s the latest version of the Galaxy A8 smartphone, the Thunderbolt 3 QLED monitor and the S-Ray neck speaker.

Last year’s show saw the debut of a few Chromebooks, so we could see an update to those this year. Also expect talk on IoT and TVs. We’ve had an early look at the TV tech Samsung is pushing this year, which includes a bigger push forwards with the QLED tech.

There were a few rumours bubbling that we be treated to a first look at the upcoming Samsung Galaxy S9 and S9 Plus phones, but this seems unlikely and will more likely come at MWC in February. If we do see a mention of the flagship phone, it’ll be very brief.