New leaks reveal that the A51 will feature quad cameras and a top-centre hole-punch style camera that’s similar to the Galaxy Note 10‘s.

Not everyone loves the hole punch camera trend, accusing the little black hole of being an intrusive mark on the phone’s display. But Samsung has reportedly decided to ignore those people and incorporated the design for its new model, the A51.

Fresh renders revealed by On Leaks and Price Baba show that the new phone will feature four cameras at the back, arranged in an L shape around an LED, with a single front facing camera in the middle of the phone’s display. 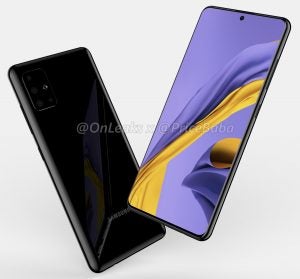 The A51 is rumoured to be arriving early next year, and while it doesn’t sound like the specs will be a huge step up from the A50, the new camera design does offer a significant change. According to tipster Ishan Argawal, the primary camera on the new model will have a 48MP sensor, and the front-facing camera will feature 32MP resolution.

Its overall size is similar to the A50 – the A51 will feature a 6.5 inch AMOLED display and be sized at 158.4 x 73.7 x 7.9mm. This means the new phone will be slightly more compact, with a slightly bigger display, but we’re not convinced this will feel significantly different when actually in-hand. Like its predecessor, the phone will feature a 4000mAh battery.

It also looks like there isn’t a finger scanner on the device, so we can guess that, just like the A50 model, the new handset will have an in-display scanner.

When we got our hands on the A50 earlier this year we were impressed with the display and camera but didn’t spend enough time with the handset to reach a firm verdict.