Samsung has launched the highest-capacity consumer M.2 SSD around, revealing the 2TB 960 PRO at an event in Seoul this morning. Not only that, the firm has also managed to improve top speeds by 40%.

Squeezing 2TB of storage onto an M.2 SSD is no mean feat, and Samsung has had to save space to make room. Where normally, the SSD’s controller chip would sit next to the DRAM module, in the case of the 960 PRO, the two have been stacked on top of one another to make room for the extra modules. 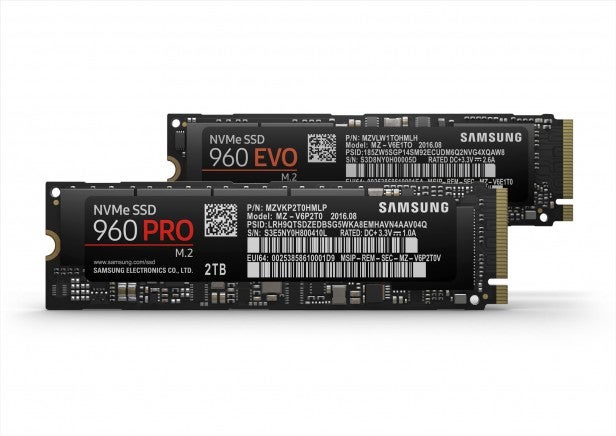 The EVO series tends to offer a slightly lower-performance SSD for a lot less cash, and that’s once again true with the 960 EVO. Starting from $130 (around £120 including VAT) for a 250GB model, there’l also be 500GB and 1TB versions. 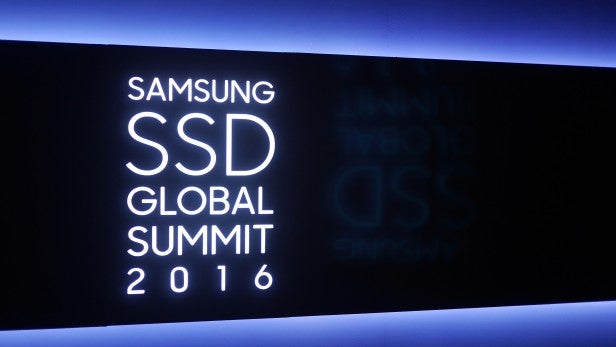 Most interesting here is performance: the 960 EVO has a faster maximum speed than last year’s 950 PRO with read speeds of 3,200MB/s and write speeds of 1,900MB/s.

There’s a catch, which will still hand the advantage to the PRO range: these speeds are absolute maximum speeds, making use of Samsung’s new Intelligent TurboWrite tech that uses a small buffer (it was 3GB, 6GB and 12GB in the previous-generation 850 EVO models) to write data super quickly. Once the buffer is filled, it’ll revert to a slower write speed. In the PRO models, there’s no buffer so speeds are consistently faster.

The new buffer capacity is 13GB, 22GB and 42GB for the 250GB, 500GB and 1TB models respectively. In addition to the larger buffer, the new Intelligent TurboWrite is an improvement on previous-gen TurboWrite, although Samsung hasn’t yet gone into much detail about how it’s made the improvements. When we know more, we’ll update this article.

Interestingly, Samsung has also done work on both 960-series SSDs label. Yes, the label. What’s normally just a piece of stuck-down paper is now a passive part of the SSD’s cooling capacity. Between the label and the adhesive, Samsung’s added a tiny Copper film to spread heat faster. The company didn’t have a comment on exactly how much extra performance the copper layer actually provides, however.

These new SSDs also use Samsung’s new Polaris controller architecture, with is an improvement on the previous-generation UBX controller with five cores, up from three.

Both the 960 PRO and 960 EVO use NVMe (non-volative memory express) and will be sold in the M.2 form factor. Only newer motherboard support the standard, but it is increasingly the way the SSD market is going.

Here’s the full list of specifications and pricing for the 960 PRO and EVO:

Samsung is expecting the new SSDs to be available from October.