Hot on the heels of Tiger Woods’ stunning victory at the PGA Tour Championship, the Ryder Cup 2018 is about to get underway at Le Golf National just outside of Paris, France. Here’s everything you need to know about this year’s Europe vs USA Ryder Cup golf, including the tee-times, schedule, TV coverage guide, and full free Ryder Cup live stream details. Plus, an exclusive look at some of the exciting tech underlying the competition.

Golf’s most exciting showcase, the Ryder Cup, is back this September – and we’ve got all the information you need to follow every stroke as Thomas Bjorn’s Team Europe takes on the Jim Furyk-led Team USA in the Ryder Cup 2018.

From the Ryder Cup dates and tee-times, to the lowdown on TV coverage and live streaming, read on for your ultimate guide to the year’s most intriguing golfing event.

Oh, and we’ll be live on the ground in case you were wondering, so expect regular updates from the Ryder Cup 2018!

Sky currently have a fantastic deal that means you can watch all of the Ryder Cup action. You can pick up a 1 month Sky Sports Now TV subscription for just £12.99, a saving of 60%. You normally only get a week’s worth of access for the same price.

That means you can tune into the entire weekend of Ryder Cup action, as well as all of the month’s great sporting events, including the Russian Grand Prix and Liverpool vs Manchester City.

You only have until 23:59 to take advantage of this big saving, so act fast.

The Ryder Cup 2018 takes place at Le Golf National (pictured, below) near Paris, France. The prestigious course is located in Guyancourt, which is about an hour or so to the southwest of the French capital. Those interested can see a map of the location here. 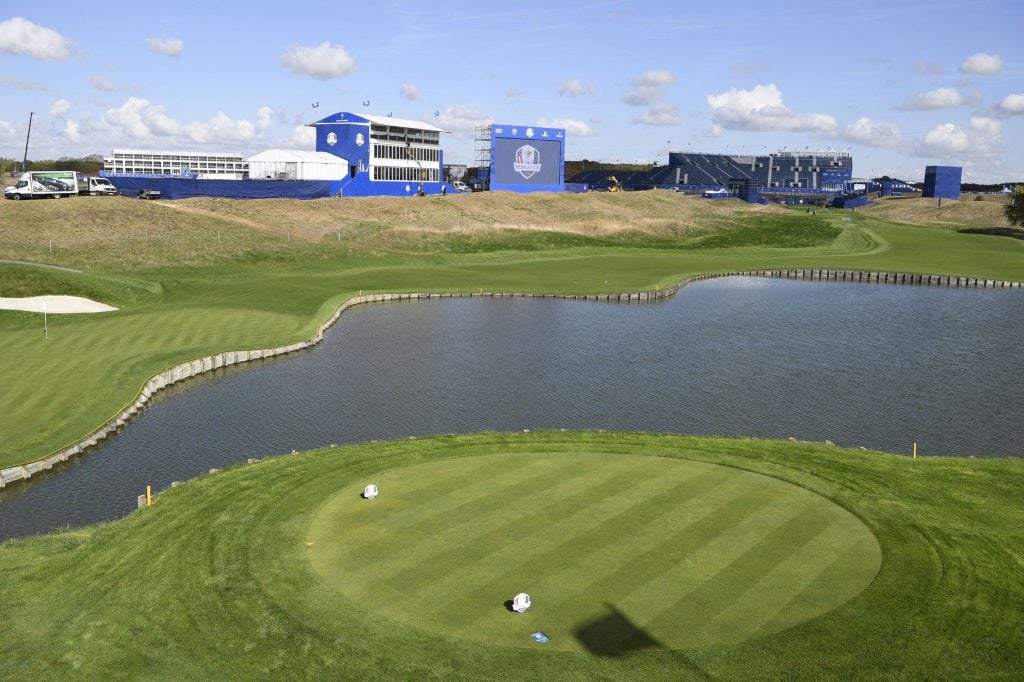 For all intents and purposes, the Ryder Cup is a week-long affair – despite the actual competition taking place over three days.

Here’s the full upcoming Ryder Cup 2018 schedule at a glance. Note that timings are subject to change by the organisers and all times are local time (CEST).

Don’t want to relive questionable early-Noughties indie tunes (hey, Kaiser Chiefs!) and the awkward memories of ex-girlfriends that come with them? You’re in good company.

Here are the Ryder Cup tee-times and schedule of play for the days that actually matter. Again, times are subject to change and are all CEST. 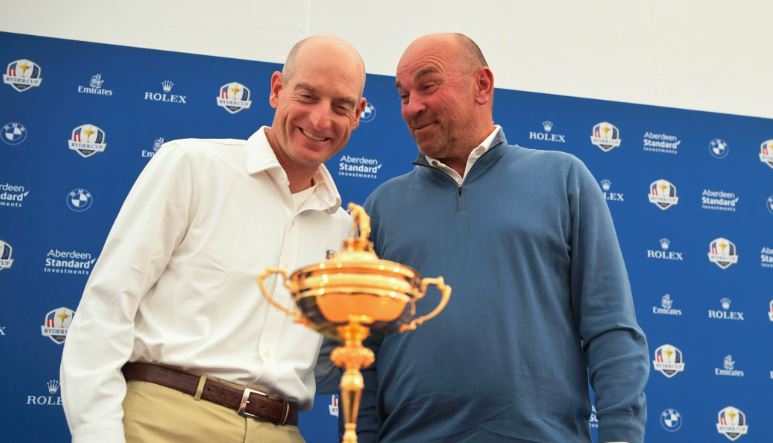 Sky has exclusive rights to the Ryder Cup 2018, making it the only place you’ll be able to catch it on TV – that’s right, including Ryder Cup 2018 highlights on TV.

For the duration of the tournament, its newly minted Sky Sports Golf channel has morphed into Sky Sports Ryder Cup and will be hosting all the action as it happens in HD. The matches themselves will also be shown on Sky Sports Main Event.

The key details for Ryder Cup TV coverage are as follows in the UK (BST) time.

Don’t have Sky Sports but want to watch the Ryder Cup on TV? The provider offers competitively priced access via its Now TV passes. The best value option for golf fans is the month pass for £12.99 (saving 60% until September 30), which will get you access to all the build up and the Ryder Cup itself for the price of a posh cocktail.

Ryder Cup 2018 Live Stream: How to watch the Ryder Cup for free in the UK

As Sky has the rights to the Ryder Cup, Sky subscribers can live stream the Ryder Cup 2018 for free via the provider’s Sky Go and Sky Sports Mobile TV apps, which are available for most major smartphones, tablets, laptops and PCs, as well as select consoles.

There’s no additional cost for Sky subscribers, while those making use of a Now TV Sky Sports pass can also access Ryder Cup live streams as part of their purchase via the Now TV app.

How to Watch the Ryder Cup 2018: US and global Ryder Cup live stream guide

Based in the US? One of our global readers? Fret not, all the Ryder Cup live stream action you can handle is just a few clicks away.

In the US, the Ryder Cup website is hosting a free Ryder Cup live stream, which can be found here.

Not able to access that because of geo-fencing restrictions? Those of you outside of the US can potentially make use of a VPN workaround and stream the Ryder Cup for free with the help of the following guide.

The Ryder Cup YouTube channel is one final option, and will be offering select live streams and highlights throughout the tournament. 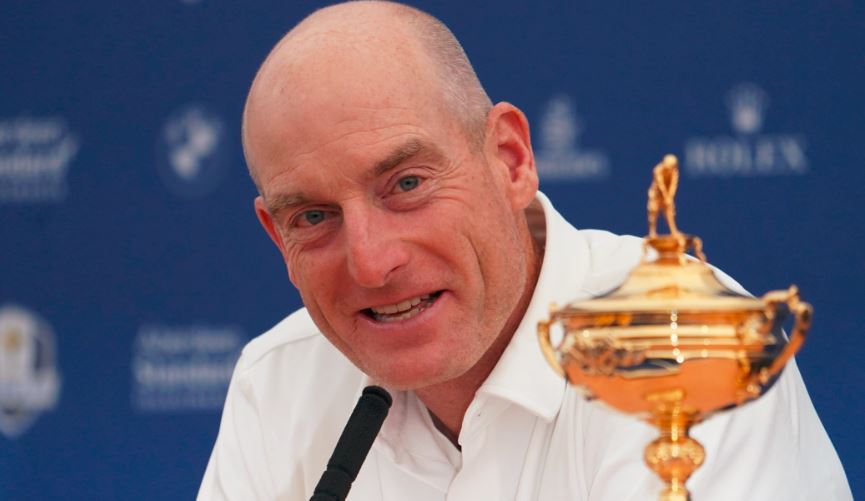 Not this time round, unfortunately.

Sky has told us that while 4K Ryder Cup TV coverage is on the cards “over the coming years”, the scale of covering a golf event – 18 holes typically measures over 6000 yards, and much more at a major competition –  in Ultra HD means that roll out is slower than some other sports.

Watching Golf on Sky Sports: 5 tech features to look for at the Ryder Cup 2018

Ahead of the first shots being fired at the Ryder Cup 2018, we got a sneak peak at some of the tech underlying Sky’s coverage of the event and walked away impressed. Here’s the five coolest features worth knowing about.

Basically, this is the best virtual golf simulator you could ever play. During the Ryder Cup, it’ll be deployed by Sky Golf pundits and pros to demonstrate shot selection strategy at Le Golf National, giving viewers who also like to hack around an added insight into how to play certain types of shots.

Like Sky Zone, Zen Green is all about simulating the putting experience at the Ryder Cup, mapping the contours and pin placement of the greens – so things like pace and direction of putt can be discussed live on-air by Sky’s pundits for the benefit of the amateur golfers at home.

Does what it says on the tin, basically. This self-explanatory feature allows Sky’s pundits to better break down key moments of Ryder Cup 2018 rounds by overlaying a range of tools and graphics onto the screen, so viewers at home to more easily digest the biggest moments from golf’s biggest theatre.

Like a turbocharged but less invasive Zepp golf sensor, Trackman allows Sky to analyse pretty much every aspect of a golfer’s shot, from swing speed to the angle of club impact.

Where Trackman analyses a golfer’s swing, Top Tracer collates data on the golf ball itself, allowing for viewers to see real-time information of how the the ball is travelling, including speed, height, carry and more. You wish your lake balls did this, right?

That’s all there is to it! With so many easy ways to watch the Ryder Cup 2018 – and some neat stuff going on behind the scenes to make the at-home experience more exciting than ever – there’s no excuse to miss a shot this weekend as the Team USA vs Europe showdown kicks-off. All images via Sky Sports Golf.