Roku has commenced an important update for its streaming devices that brings Apple AirPlay 2 and HomeKit support.

The company also says 4K TV sets running the RokuOS will also be in line for the update over the course of the next few weeks. It doesn’t appear as if these updates will trickle down to non-4K devices at this point.

The addition of AirPlay 2 is a significant update for iPhone and iPad owners, who can now cast A/V content from their devices to their streaming devices or Roku soundbar. That could mean casting a Zoom video call to the TV, or sharing Spotify playlists to the soundbar, for example.

HomeKit support also brings Siri support to into the equation with device owners now able to control their Rokus with their voice. The company writes: “With HomeKit, you can easily and securely control your Roku device with your voice or by using the Home app and Siri on iPhone, iPad, Mac, Apple Watch, or HomePod.”

With this update, Roku boasts it’s the first such company to bring support for all three of the major voice assistants; Google Assistant, Amazon Alexa and now Apple’s Siri. 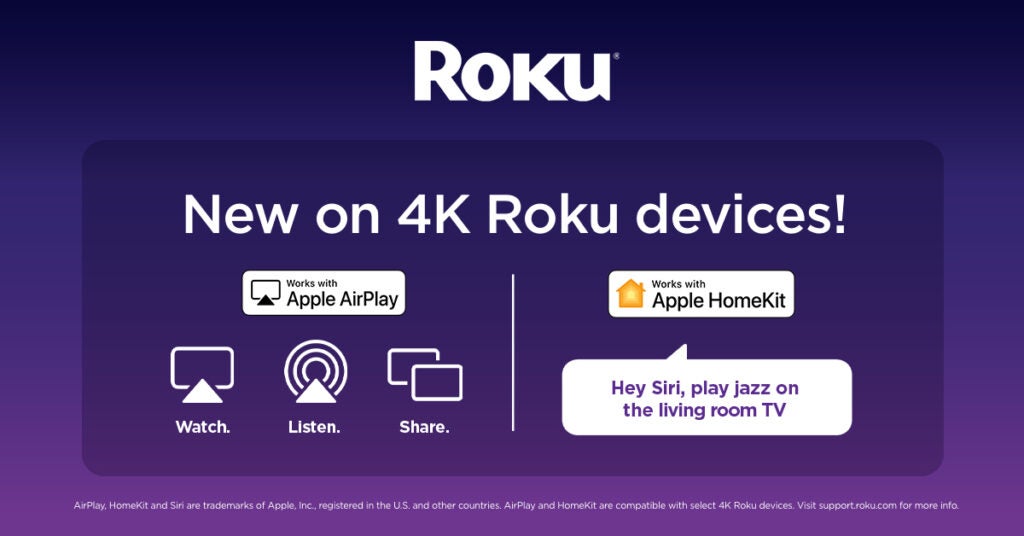 The update follows the launch of the Apple TV app on Roku devices, which has made the Apple TV Plus streaming service available to Roku users, as well as offering access to libraries of iTunes movies and TV shows.

Roku continues to be a leader in the set-top box and smart TV space, despite strong efforts from Amazon and Google to unseat it as a pioneer in the arena. The company perhaps deserves more credit than anyone for its ability to smarten up televisions and usher in the streaming era.