The Amazon-owned smart home company Ring is the subject of a troubling new report, claiming it handed over access to every video ever recorded on its devices, to employees that didn’t need access.

According to sources speaking to The Intercept, the company made ‘its entire catalogue’ of videos recorded on its video doorbells available to a ‘huge’ number of employees on its R&D team in Ukraine.

The report says the research and development team “virtually unfettered” and unencrypted access to a folder on Amazon’s S3 cloud servers, containing the vast stockpile of recordings from Ring users all over the world.

Alarmingly, the sources said the Ukraine team was even provided with a database that tied “each specific video file to the corresponding specific Ring customers.”

According to the report, Ring decided to keep the videos and database wide open because of a “sense that encryption would make the company less valuable.”

While the source said they did not witness abuses of the access, they said it would be perfectly possible to spy on a reporter or a competitor’s cameras, simply by typing in their email address. The source did say engineers working at Ring would “tease each other about who they brought home,” although they knew of the real-time surveillance their home was under.

In a separate element of the report, the source alleges that high-ranking Ring executives had access to the technical support team’s video portal, which offered live feeds from customers cameras, despite not needing it. The access is compared to Uber’s ‘God mode’ which allowed it to see where all passengers were in real time.

The report also shed light on the video-tagging procedures undertaken by employees to help train the cameras to recognise objects appearing in front of the cameras. Those practices included the team in Ukraine watching feeds in real time and drawing boxes around people coming in and out of the camera’s field of view. The images below were provided by the source: 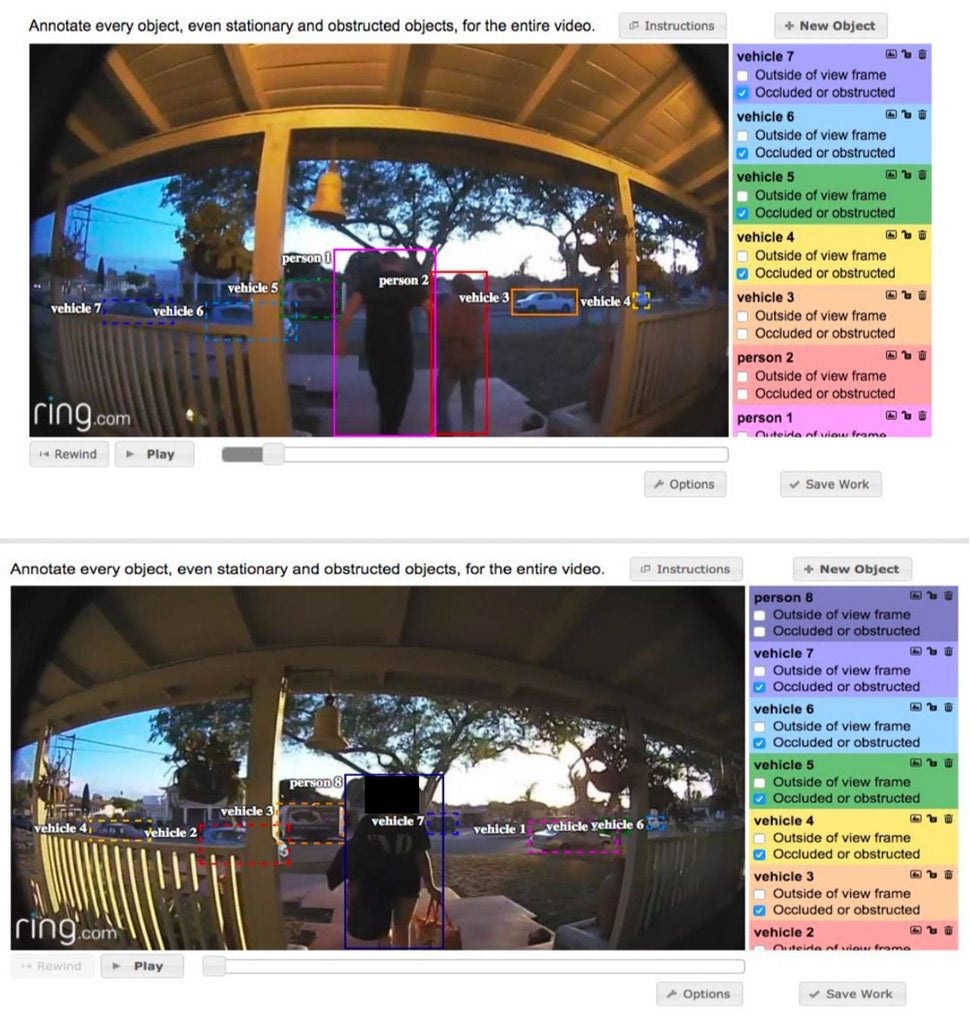 Ring hasn’t commented on all of the allegations laid out in the report, but did provide the following statement:

We take the privacy and security of our customers’ personal information extremely seriously. In order to improve our service, we view and annotate certain Ring videos. These videos are sourced exclusively from publicly shared Ring videos from the Neighbors app (in accordance with our terms of service), and from a small fraction of Ring users who have provided their explicit written consent to allow us to access and utilize their videos for such purposes.

We have strict policies in place for all our team members. We implement systems to restrict and audit access to information. We hold our team members to a high ethical standard and anyone in violation of our policies faces discipline, including termination and potential legal and criminal penalties. In addition, we have zero tolerance for abuse of our systems and if we find bad actors who have engaged in this behavior, we will take swift action against them.

Does this troublesome report put you off buying a Ring camera? Let us know @TrustedReviews on Twitter.