Razer has been at the forefront of the RGB craze since its inception, and now the line-up has become even stronger with the IFA 2018 announcements of the Kraken Tournament Edition headset, Blackwidow Elite keyboard and Mamba Wireless gaming mouse.

If your PC gaming accessories are in need of a dire update, then one of these glow-up gadgets may just be what you’re looking for. 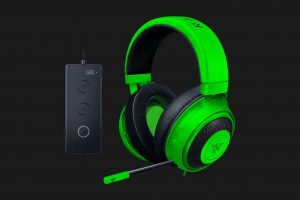 It’s often hard to improve upon a tried and tested formula, but Razer has no doubt that it has the best headset you can buy under £100. The Tournament Edition is the next generation Kraken gaming headset, and it merges everything we liked about the analogue Kraken Pro V2 with the USB equipped Kraken 7.1.

Utilising a USB DAC for surround audio, the Kraken Tournament Edition is the world’s first headset to use THX Spatial Audio, which not only enhances the sound stage, but helps provide precise sound placement for better awareness in games like Player Unknown’s Battlegrounds.

The headset splits into a 3.5mm jack, which allows the Kraken to work with almost any device, although you’ll want to be using the USB audio controller for complete control and adjustment. The controller is software independent too, so you’ll be able to adjust volume and bass without the need for any software.

There are also tweaks to the cushion design, as Razer has listened to gamer feedback and swapped the circular earpads for a more comfortable oval shape, and also incorporated a cooling gel into the memory foam, which should aid in reducing heat build up. 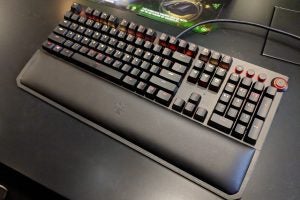 Keyboard fans will be overjoyed at the announcement of the Blackwidow Elite – the successor to the much-loved Chroma V2. There are quite a few improvements here, with the most striking being the addition of dedicated media keys to the top right hand corner of the board. Like rivals from Corsair and ROG, there’s now a bank of buttons for play/pause and skip, with Razer cleverly choosing to arrange the volume controls in a circular wheel – a similar manner to the Logitech Craft.

Underneath each key you’ll find Razer’s improved mechanical switches, with Green, Yellow and Orange options available. The most significant change is the new dual sidewall for increased stability when pressing far away keys, and each key is now rated for an 80 million keystroke lifespan.

Should you ever travel with your keyboard or swap between PCs, Razer has also incorporated hybrid on-board memory and cloud storage for up to five profile configurations, including Hypershift which allows secondary functions to be assigned to each key. 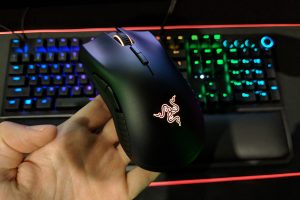 The new Mamba Wireless mouse marks a change from the old; improving the usability while significantly reducing the cost.

The ergonomic seven button design is similar to the outgoing model, but there’s now Razer’s flagship 5G optical sensor on board, with 16,000 DPI and a resolution accuracy of 99.4%. You’re incredibly unlikely to ever use that high a DPI, but we came away from the hands-on incredibly impressed with its performance.

Charging is now achieved via a USB cable rather than a dock, and battery life has been increased by 150% to 50 hours. Weight appears uncompromised however, with the 106g frame proving light and nimble.

The Mamba Wireless hits shelves this month, priced at £99.99/$99.99. You can expect full reviews of the new Razer line in the coming weeks, so keep it locked to Trusted Reviews.

Ready to throw your money at Razer’s new gaming peripherals? Tell us about it on Twitter @TrustedReviews