Razer Blade vs Stealth vs Pro: What’s the difference?

To the eternal disappointment of UK fans, Europe had always missed out on Razer’s hugely popular line of gaming notebooks. But that’s all changed, as Razer unleashes three new gaming laptops on the continent: Razer Blade Stealth, Razer Blade and Razer Blade Pro.

What’s the difference, and which one should you buy? 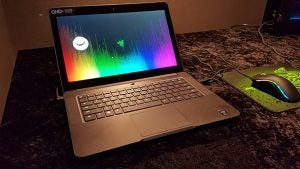 The Razer Blade is the mid-tier option out of Razer’s new laptop trio. It’s a gaming laptop that’s been designed to be as portable as possible, which explains why it’s lighter than a MacBook Pro, and only marginally thicker than a MacBook Air.

What’s exciting about the Razer Blade is that, unlike the old model, it features a proper desktop GPU – specifically, Nvidia’s new GeForce GTX 1060. That means it’s VR-ready, and should be capable of playing most games at Full HD resolution. Note also that this is the full-fat 6GB GDDR5 VRAM version of the GTX 1060, rather than the cheaper 3GB variant, which is good news.

Unlike the other two Razer laptops, the new Blade is using an older 6th-generation Intel processor. You’ll also get a choice between 256GB, 512GB and 1TB storage options, and either a Full HD or QHD+ 14-inch display.

The Razer Blade is attractively designed, a sports a thin, black aluminium chassis that won’t look massively out of place in a home or work environment. It’s the ideal choice for people who need computing heft on the move.

You can pre-order the Razer Blade now at Razer’s online store in the UK, US, Germany and France, with shipping expected to begin “within a couple of weeks”. It costs £1,749, $1,799 or €1,999, and comes with a free Razer Mamba Tournament Edition gaming mouse and Razer Mercenary backpack. 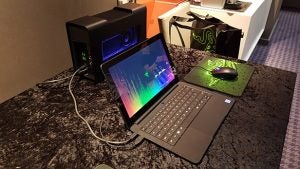 The Razer Blade Stealth is the cheapest option, and is arguably just a plain, old ultrabook, rather than a gaming notebook.

It’s thinner and lighter than a 13-inch MacBook Air, and features a new 7th-generation Intel Core i7 processor. It also packs an impressive 16GB of RAM, but misses out on dedicated graphics. You’ll have to settle for integrated Intel HD Graphics 620, which rules out any high-performance gaming.

But don’t fret, because Razer has a workaround in the shape of the Razer Core. The Core is a dedicated external graphics enclosure that sits on your desk, and connects to your laptop via Thunderbolt 3. It’s fully compatible with the latest Nvidia and AMD graphics cards, including the top-end GeForce GTX 1080 GPU.

The Stealth will cost you £999, while the Core will set you back a further £399, which means that both of them together still cost less than a Razer Blade. And importantly, there’s the potential to have the Stealth running on a GPU that’s even more powerful than the Blade’s built-in GTX 1060. Of course, you’ll have to actually pay for a GPU to stick in the Core, so you’ll need to factor that cost in.

That said, when you’re on the go, you’ll have to settle for slightly less processing power. But if you use your laptop for basic tasks on the move, and only really play video games at home, the Blade Stealth is a seriously impressive alternative – especially considering the 4K display option.

You can buy the Razer Blade Stealth in the UK, US, Germany and France for £999, $999 or €1,099. It also comes with a free copy of the FL Studio photo editing software, worth €189. And if you buy one before the end of October, you’ll get a Razer Orochi gaming mouse and a Razer Kabuto mousepad for free. Meanwhile, the Razer Core external graphics enclosure costs £499 or €599. But if you buy it at the same time as you purchase a Razer Blade Stealth, the price is reduced to £399 or €449. 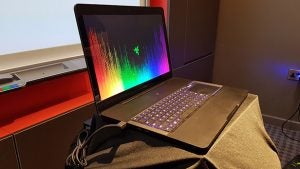 The Razer Blade Pro is the crème de la crème of Razer’s gaming notebook trio. It’s envisioned as a true desktop replacement, and the spec sheet makes it clear why.

First off, you’re getting Nvidia’s flagship desktop graphics card built-in – that’s the GeForce GTX 1080, with 8GB of GDDR5X VRAM. That sits alongside Intel’s 6th-gen Core i7-6700HQ, which has a mighty peak clock speed of 3.5GHz. That’s still a laptop processor, mind, but it’ll beat some desktop chips all the same.

Perhaps one of the standout features is the low-profile mechanical keyboard, which is unique among gaming laptops. Despite looking like a traditional chiclet keyboard, all keys feature mechanical switches and individual backlighting, which means that the laptop is also fully Chroma-enabled.

The Razer Blade Pro is comfortably the biggest laptop of the trio, with a height of 22.5mm and a weight of 3.54kg. But it’s only a few millimetres thicker than a MacBook Pro, and features seriously impressive hardware that will rival (and likely beat) many advanced desktop PC configurations.

If you’re not keen on having a giant desktop PC in your home, the Razer Blade Pro is seriously worth considering. Add in the fact that, despite being heavy, it’s still technically portable – moreso than a desktop PC, anyway – then the value is clear. But it’s a tough sell to most gamers thanks to its staggeringly high price tag.

Which Razer Blade laptop should I buy?

Here, we have three laptops designed for three very different kinds of gamer, and you’ll find good and bad points about each.

If performance is the only metric you measure a laptop’s worth by, then the Razer Blade Pro (£3,499) is the obvious choice. It’s absolutely a ‘money is no object’ purchase; many gamers wouldn’t dream of dropping nearly four grand on a laptop. But if you’re done with desk-hogging PCs and you’re flush with cash, then the Razer Blade Pro is hard not to recommend. That said, it’s very bulky, so if you want to use this laptop on the move, consider an alternative Blade.

The Razer Blade is far more portable that the Blade Pro, but it’s significantly less powerful. If you can deal with toning down the graphics settings or resolution on more demanding games, this is a great choice. Better still, you can use this laptop for video editing, and just about any other work too. But at £1,749, it’s hardly cheap, so you have to consider whether a Stealth would suit your needs better. 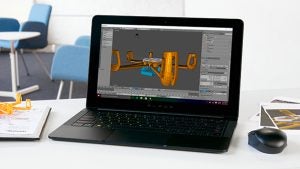 The Razer Blade Stealth is the thinnest and lightest of the bunch, and will hardly be noticeable when lugged around in a backpack. And at £999, it’s really competitively priced. But the trade-off is that you won’t be able to game seriously unless you’re connected up to the Razer Core graphics enclosure. Still, there’s potentially good value to be had. A Razer Blade Stealth £999 paired with a £399 Razer Core, plus an Nvidia GTX 1080 (~£670), will cost you £2,068. That’s pricier than the Blade, but it’ll get you a GTX 1080 rig for far less than a Blade Pro would cost. Of course, you’ll still have to settle for a smaller screen, less RAM and a weaker processor, but it’s ideal for the at-home gamer looking for an ultrabook.

Only you know whether any of the new Razer Blade laptops will suit your needs, but there’s no denying that all three are impressive products, and are all definitely worth your consideration.

What do you think of Razer’s latest gaming notebooks? Let us know in the comments.