Last week, I was sitting in glorious English woodland, enjoying a fulsome back massage and sipping chilled beverages as some Vivaldi wafted gently out of a £4,000 sound system. Welcome to the ultra-luxury world of a high-end Range Rover Autobiography.

As the SUV market continues to boom, car makers are finding themselves forced to innovate on features faster than ever. Cash-flush car shoppers want all the bells and whistles, and Land Rover’s Range Rover brand is now facing stiff competition from premium vendors like Porsche and Audi like never before.

Here are four reasons why the Range Rover still has the edge when it comes to ultra-luxury SUVs. 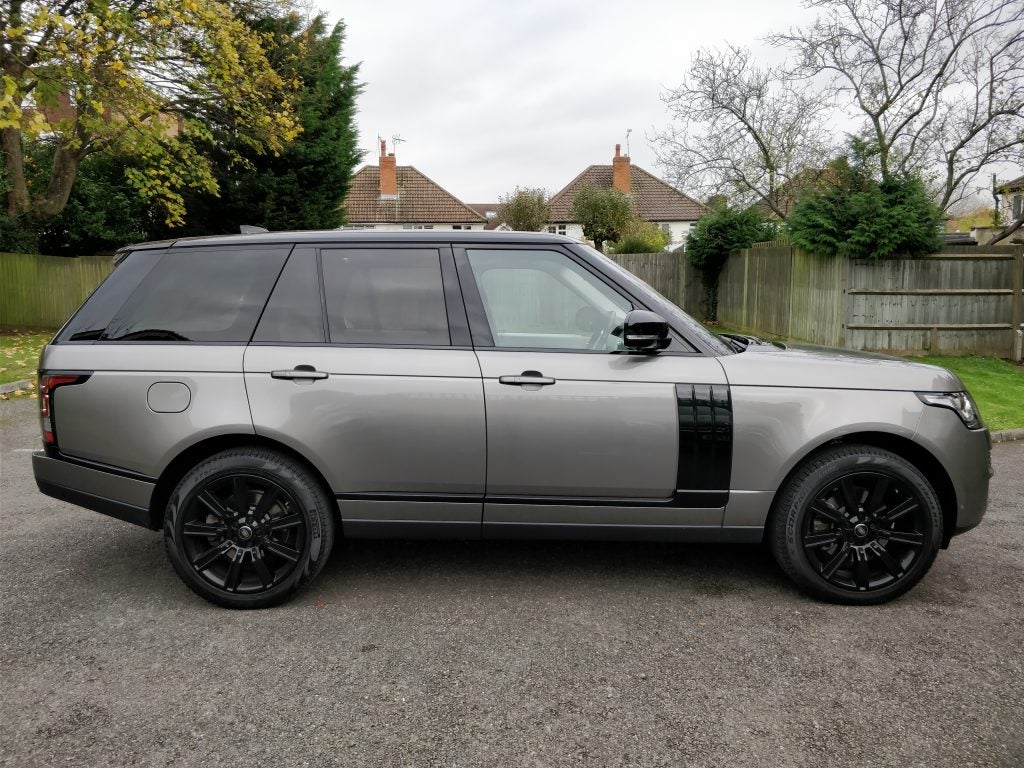 It’s fair to say that the Range Rover is the most recognisable car on the road these days. Its unique, boxy stylings can be spied a mile off, which makes sense – if you’ve spent £100,000 on a car, you want people to notice it.

The Range Rover is the biggest of the current Range Rover line-up; it’s 1,835mm high, 2,220mm wide, 4,999mm long, and boasts a staggeringly long wheelbase of 2,922mm. The Range Rover Evoque looks puny next to it, and rightly so – the Evoque starts from a comparatively measly £30,545. 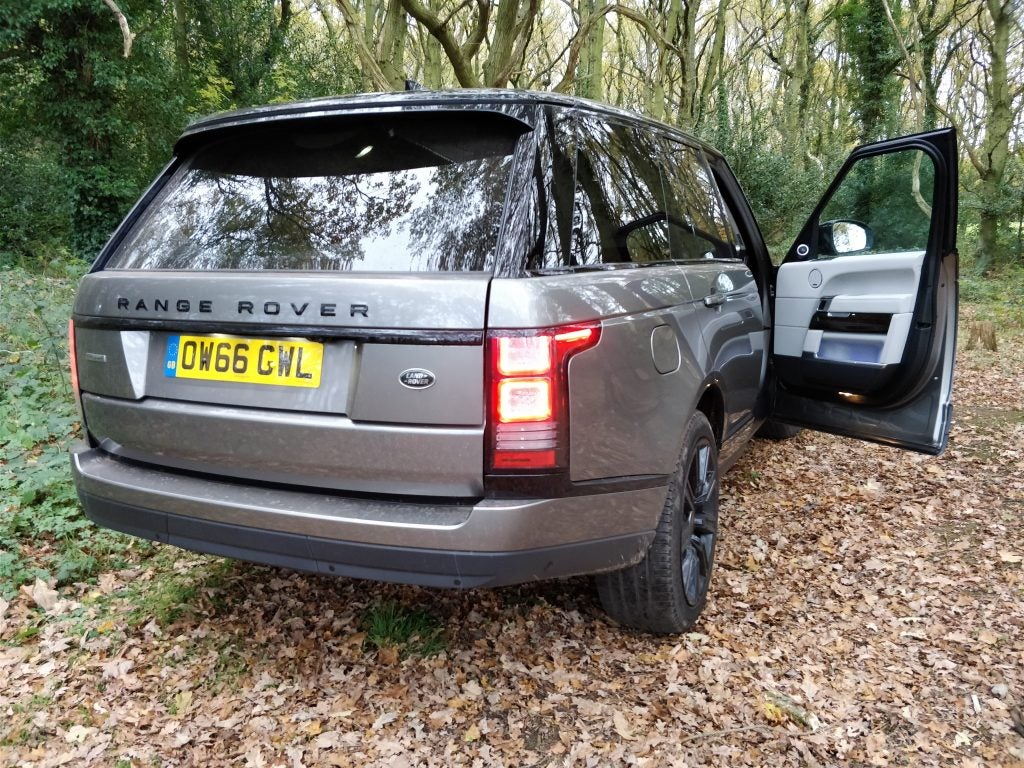 Notable exterior features include the quintessential Range Rover branding and grille on the front, a flatter, taller rear-end compared to the rest of the more tapered Range Rover series, and an impressive amount of window real estate – privacy infrared reflective glass is an optional £780 extra. There’s also a retractable sun-roof that brings even more light into the car.

2. New Range Rover Interior: The cabin has features you didn’t know you needed

The inside of the Range Rover TDV6 Autobiography is bafflingly cool. Ours had a cool Cirrus/Ebony Interior, with welcome trimmings like a part-wood heated steering wheel.

All four seats in the Range Rover have perforated surfaces that provide heating or cooling capabilities, and boast massage functionality. Yes, you can choose between five different massage modes in any seat in the car, and really relax during a long road-trip. All of the chairs – and the steering wheel – can be electronically adjusted for maximum comfort too. 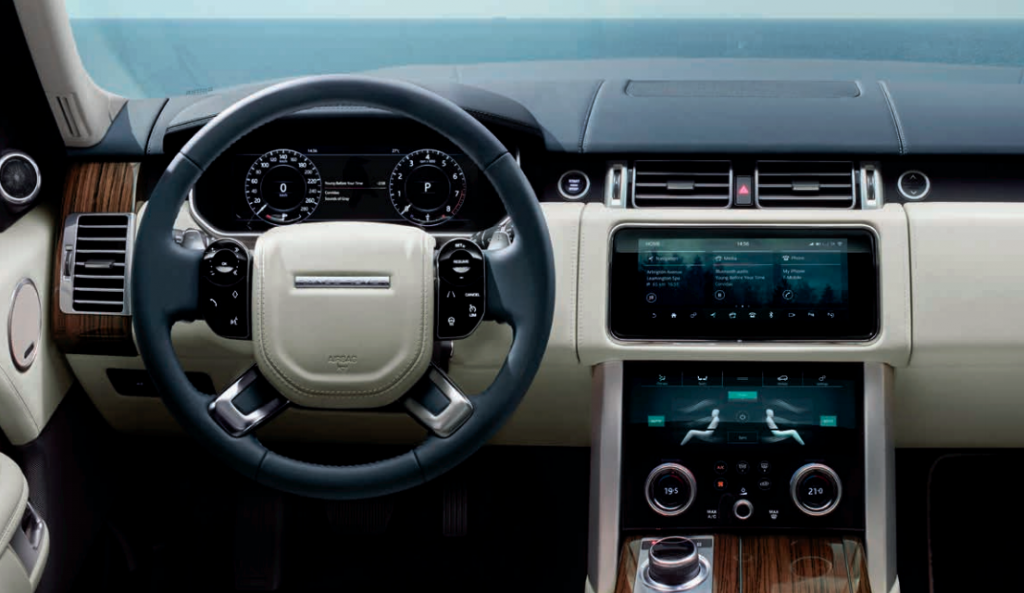 The cabin is spacious and airy, with plenty of headroom and legroom. Drop-down arm rests and generously wide door ledges reduce arm fatigue. Every inch of the Range Rover feels designed for peak cruising enjoyment.

The infotainment system lives in the centre of the dash – its Land Rover’s own InControl Touch Pro technology, which you’ll find on other Land Rover and Range Rover models too.

You can use the InControl system to curate a number of the car’s features, including controlling massage and heating functionality for all of the seats, as well as navigating or playing media – you can even watch actual live TV using the front screen or the two rear panels. 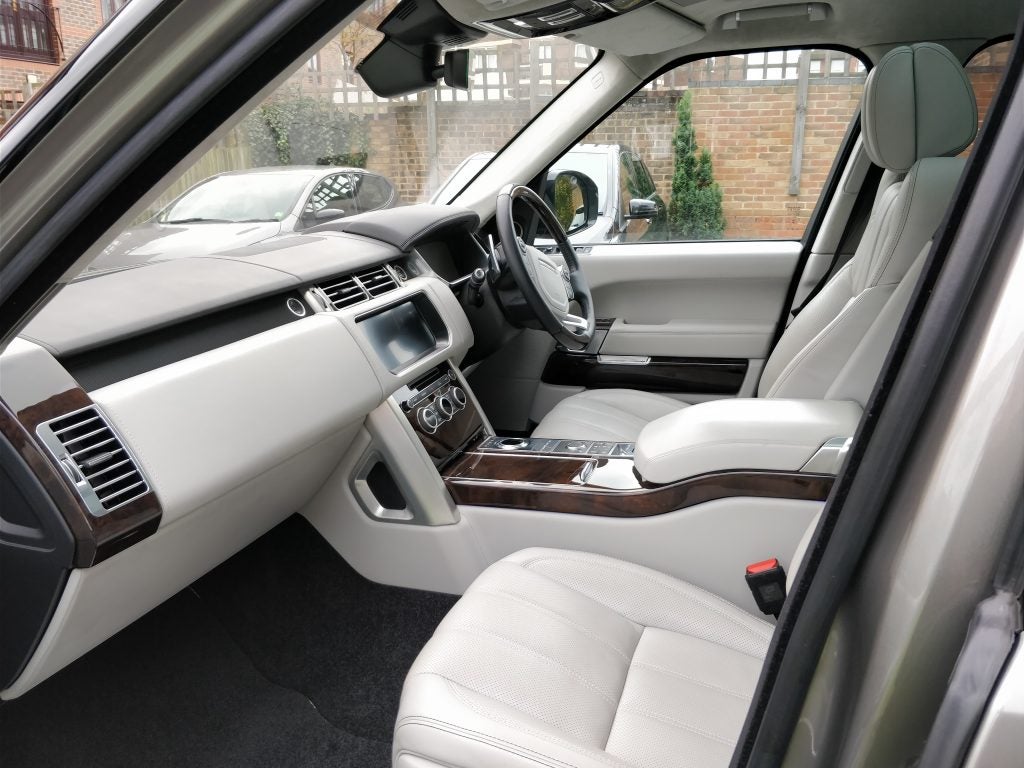 The InControl TouchPro system also gives you access to the array of cameras loaded onto various points around the car. A rear camera aids you when parking, while front and side cameras offer great floor-level viewing for off-road driving. There’s also a birds-eye, 360-degree view option, which melds all of the camera footage and superimposes a to-scale version of the Range Rover so you can navigate tricky parallel parks, for instance.

But going deeper into the Range Rover systems reveals a whole other level of capability. You can remotely heat the car while it’s parked using timed climate controls. There’s traffic sign recognition and intelligent speed limiting built into the adaptive cruise control tech. There’s even an optional heads-up display on the windscreen – for the driver’s view – that shows navigation, speed limits, cruise control settings, and current speed, if you’re willing to fork out an additional £1,035. 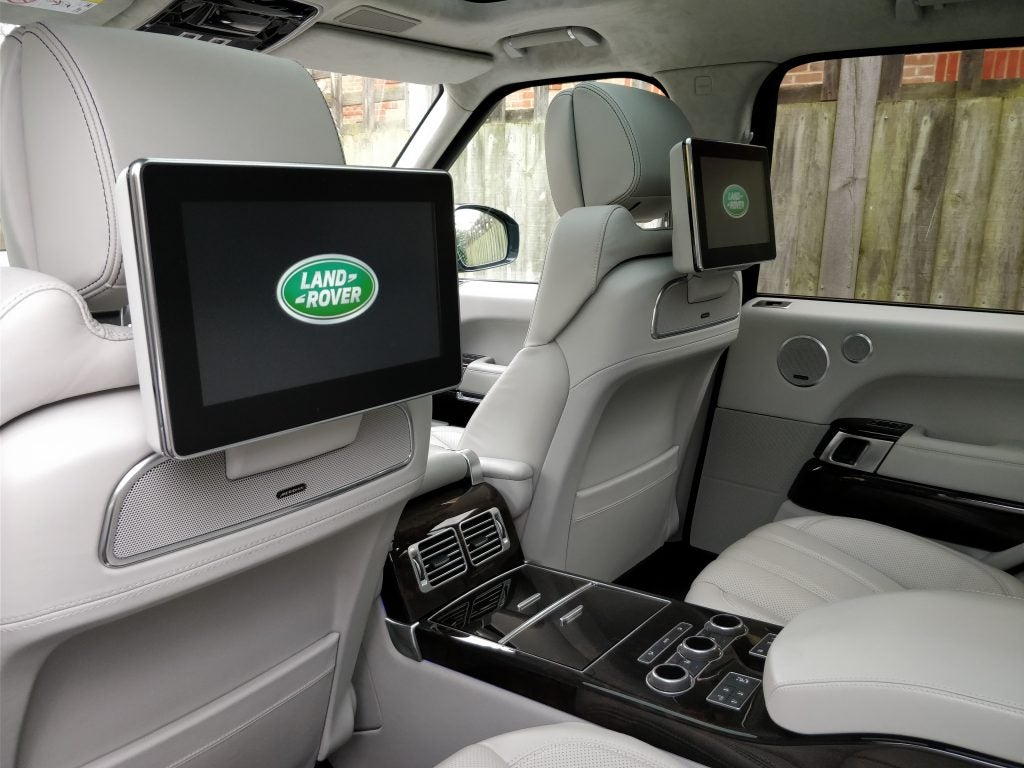 The Meridian sound system cost a hefty £4,140, and was as impressive as you’d expect. Bass was heavy and fluid, trebles were tight, and the overall loudness was formidable. But the biggest perk is the lack of noise leakage; blasting bassy hip-hop at full volume in the sleepy Staffordshire village where my parents live went without incident, leaving neighbours and passers-by largely unaware.

Oh, and there’s a refrigerator built into the central console – as if we needed to remind you.

This car weighs a ludicrous 2,215kg, so you’d think that driving it would be a sluggish and awkward affair. Not quite.

In fact, the Range Rover was genuinely thrilling, and felt surprisingly nippy for its overbearing size and weight. It cornered well, and proffers some very decent acceleration. The official metrics suggest a 0-60mph of just 7.4 seconds (seriously good considering the car’s weight and blocky design) and a top speed of 130mph. When it comes to weight vs performance, there’s very little trade-off. 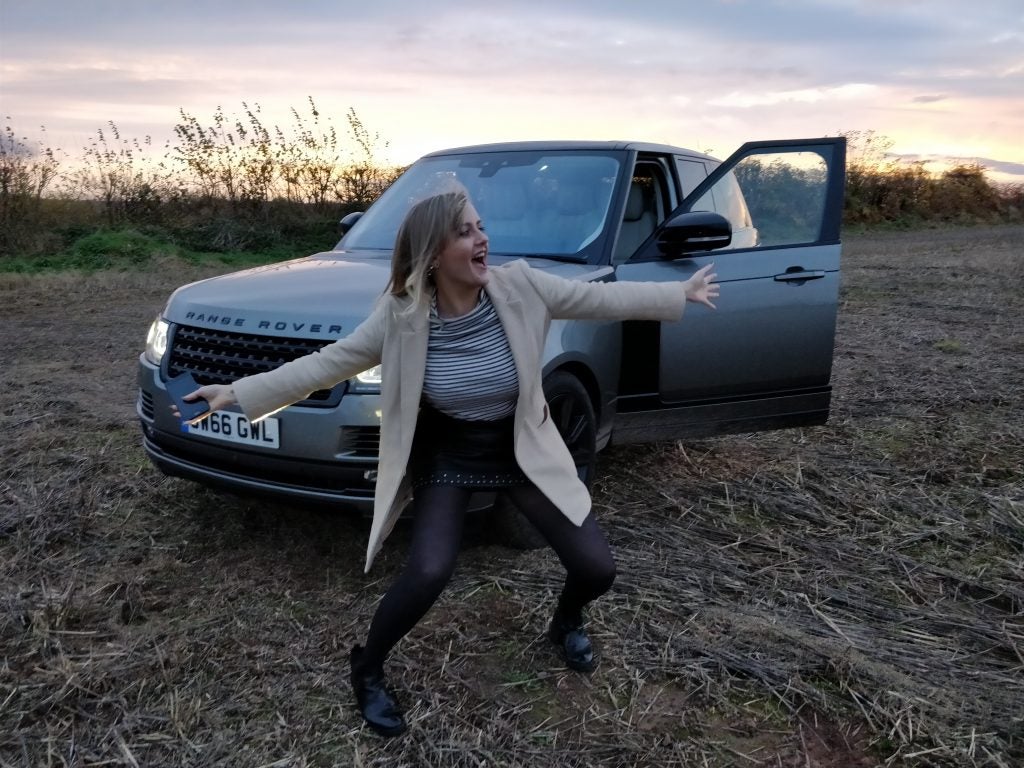 That’s thanks to Land Rover’s 3.0-litre TDV6 Turbodiesel engine, which boasts a max power of 258hp and a maximum torque of 600Nm at around 2,000rpm.

The downside is that it’ll cost you a fair whack to run, and that’s thanks to (1) the significant weight, (2) the diesel-thirsty engine, and (3) the additional features (like heated steering) that you’ll probably be running constantly.

Here are the official consumption metrics – and be prepared to wince:

Anyone who owns a hatchback or hybrid will likely be completely baffled by the prospect of such lowly miles-per-gallonage. But it’s important to remember that if you’re spending north of £100,000 on an SUV, you’re probably not fussed about a few extra trips to the local garage forecourt. 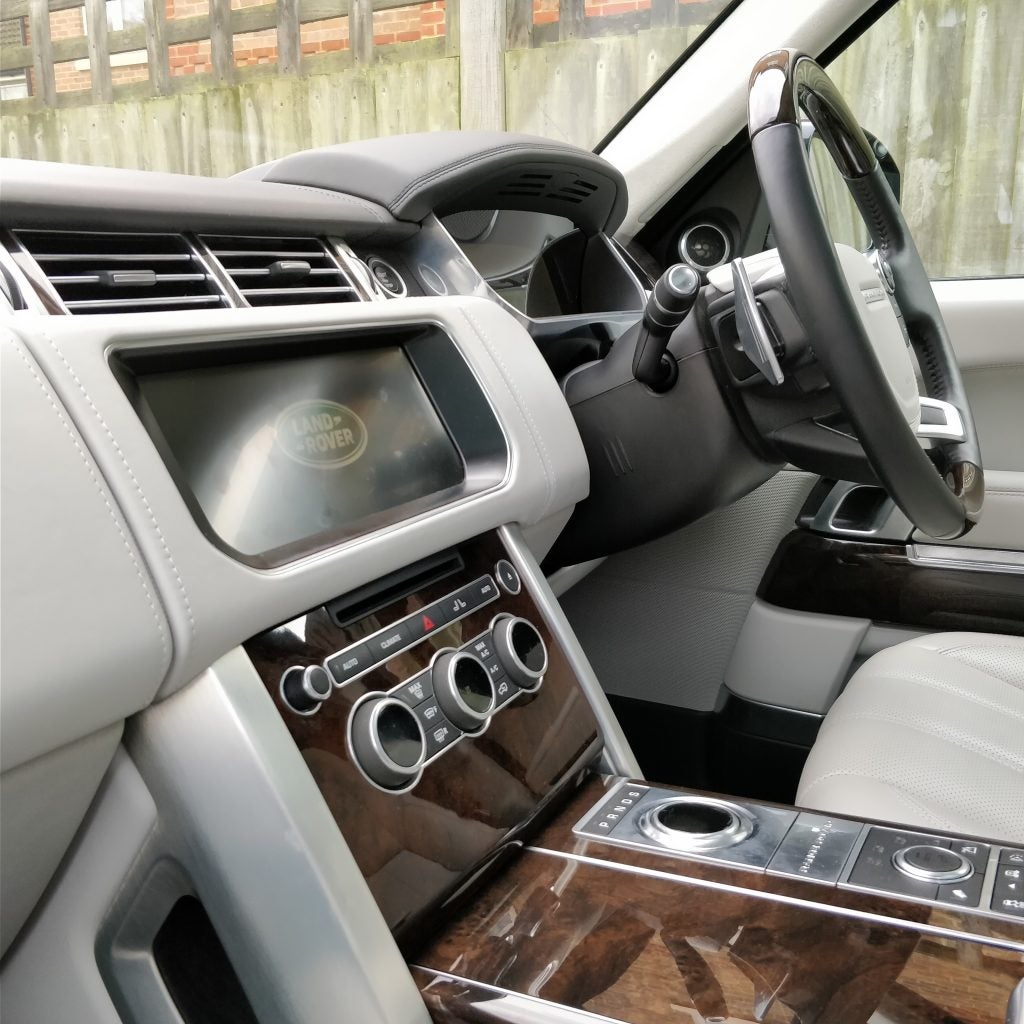 When the Range Rover first launched back in the early 1970s, the idea was to create a Land Rover that was suited to driving in urban environments.. After all, there were (and still are) plenty of city folk earning lots of money, and that’s a valuable market for any car maker. The trick, however, was to ensure that the Range Rover was still capable of driving off-road.

That vision has lived on today; Range Rover is still seen as a great way to cruise along a dirt track, but they don’t look odd parked outside of a country manor house or fancy London restaurant either. 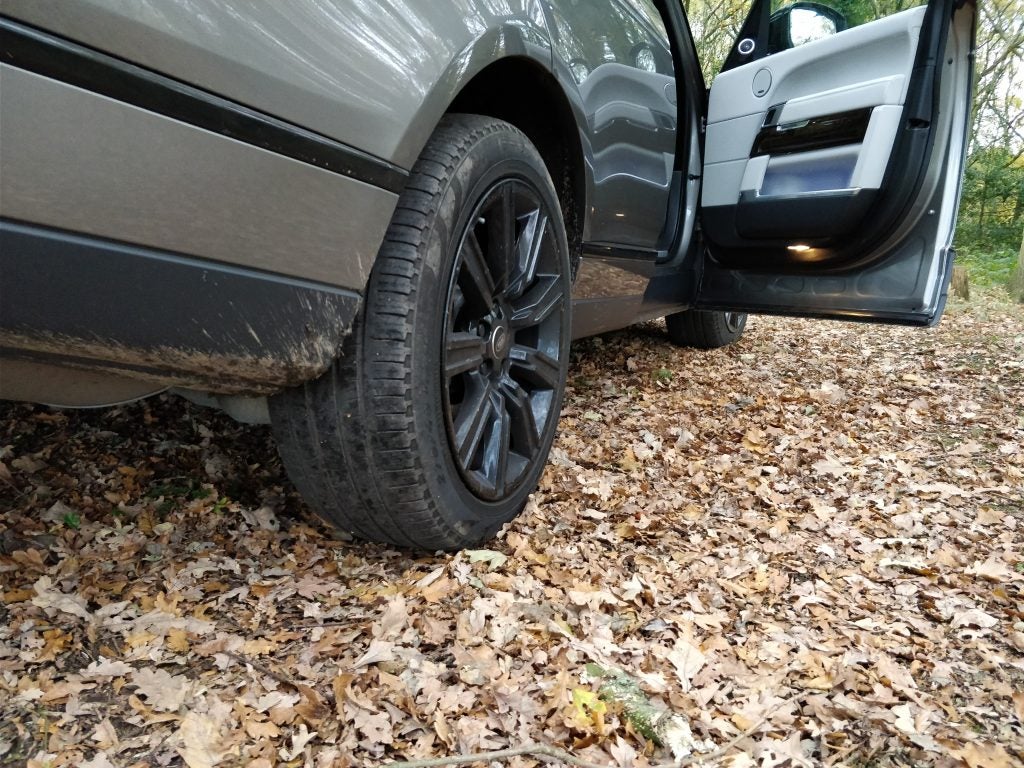 The vehicle’s gigantic proportions help, sure. As a result of the Range Rover Autobiography’s towering stature, it can claim an impressive obstacle clearance of 221mm, and a wading depth of 900mm.

But other features help too. You’ve got four-wheel drive, 360-degree cameras for obstacle-dodging, and adjustable suspension. There’s also a dial on the central console that lets you choose between various terrain modes, and there are helpful guides on how to drive off-road safely in the infotainment system.

I gave it a whirl on some dirt tracks and wooded areas, and the Range Rover simply felt as though it was gliding along – and that’s a big reason why people are willing to fork out so much money for these cars.

The shoulder massage may have helped, mind…

Here are some more snaps of the car: 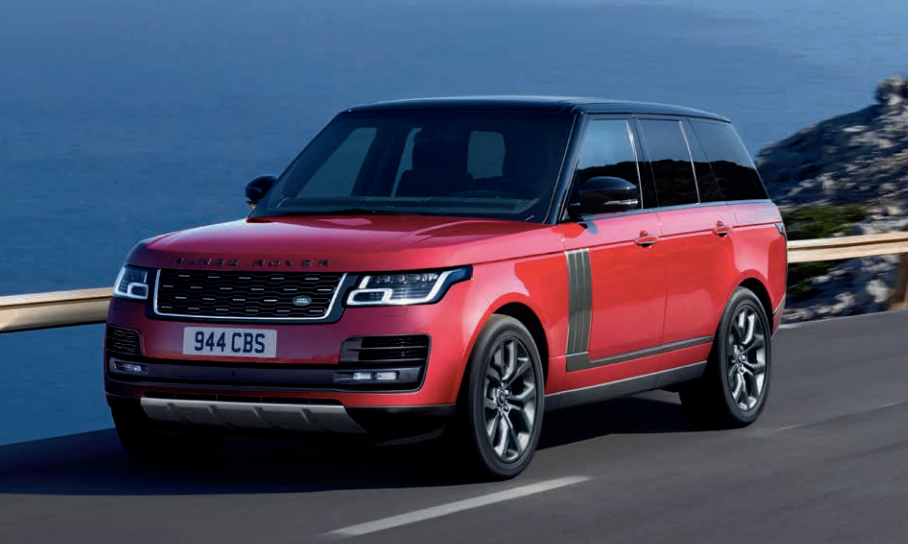 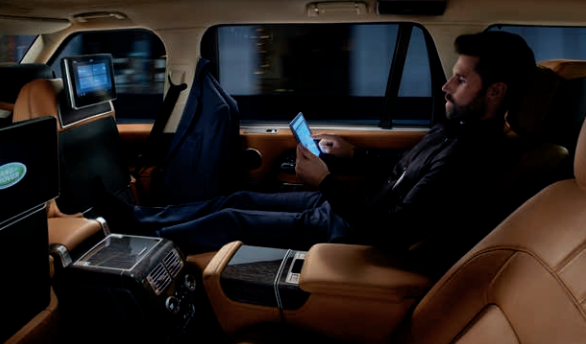 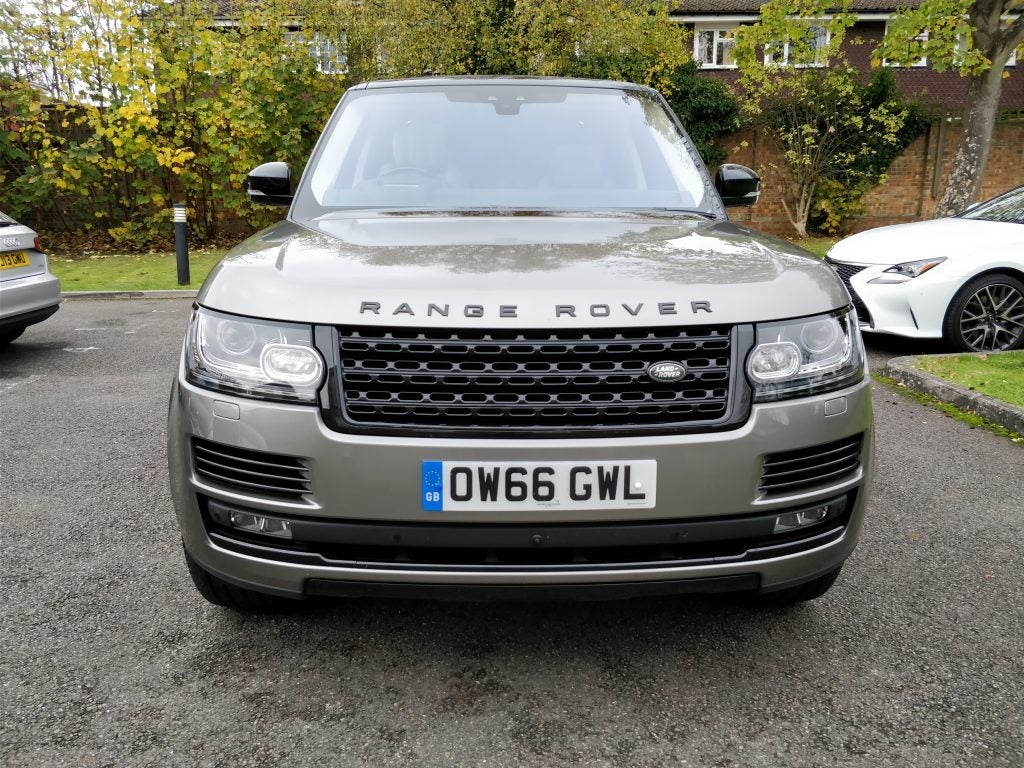 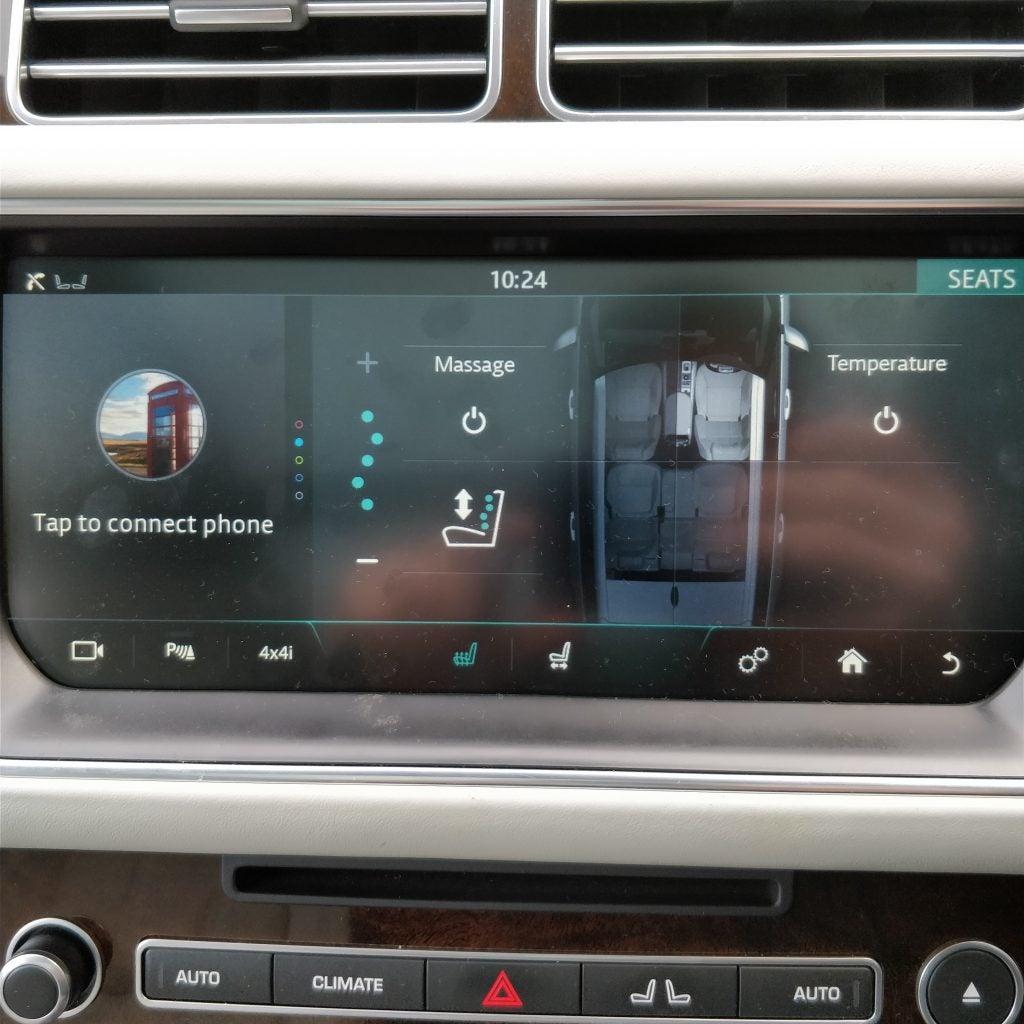 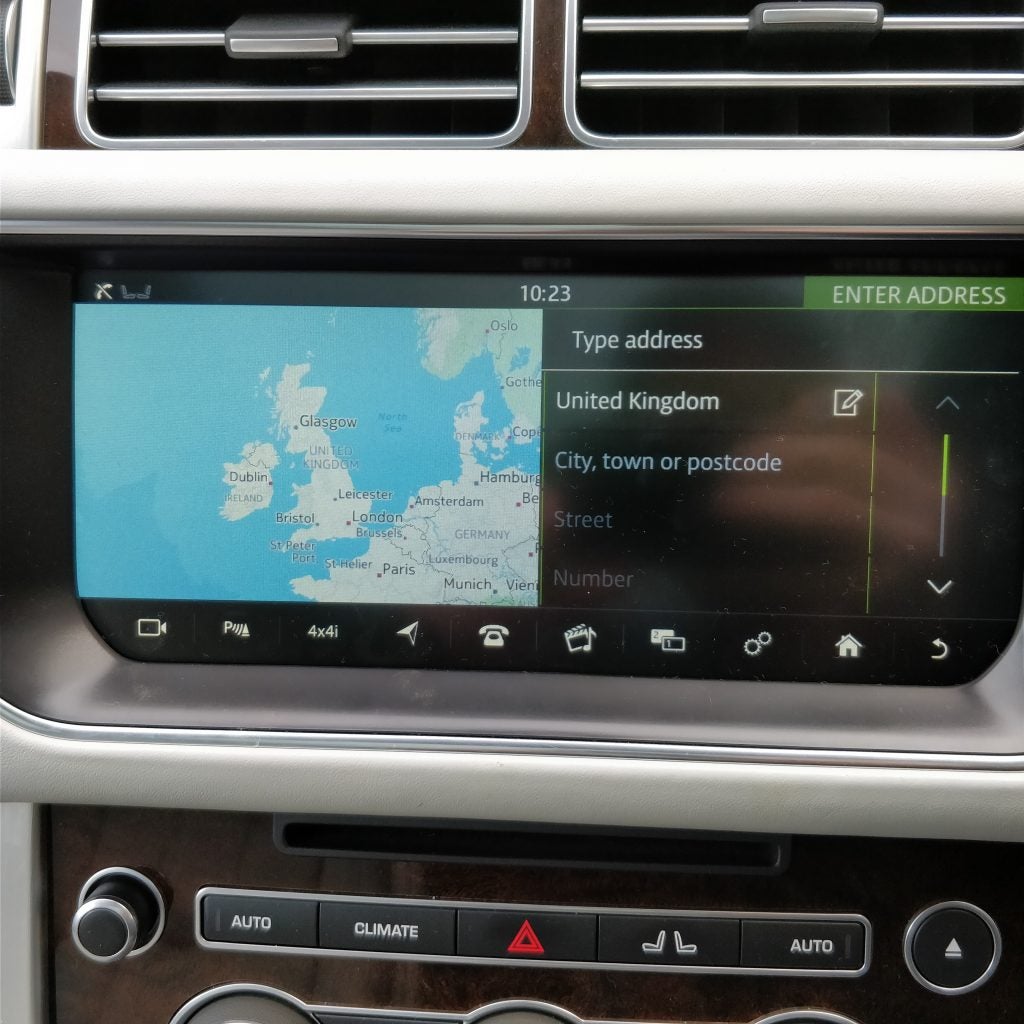 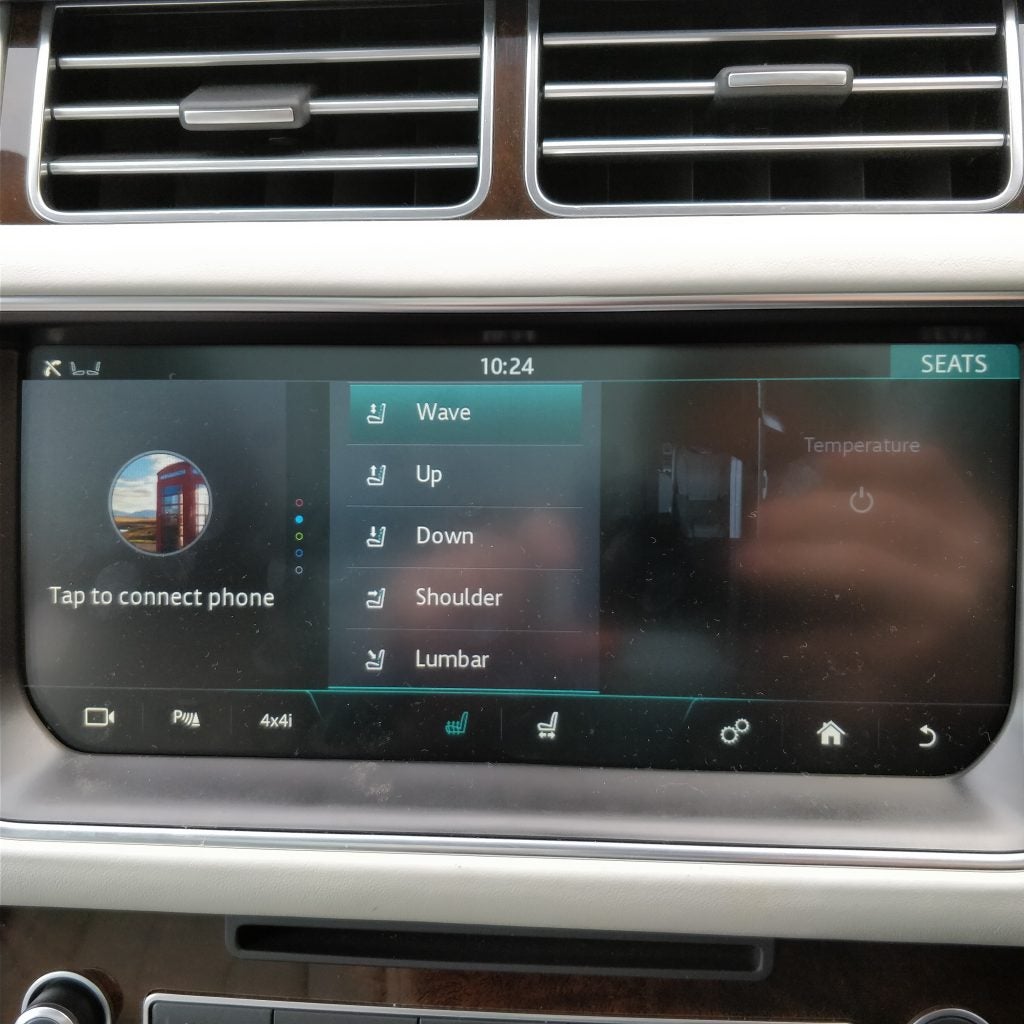 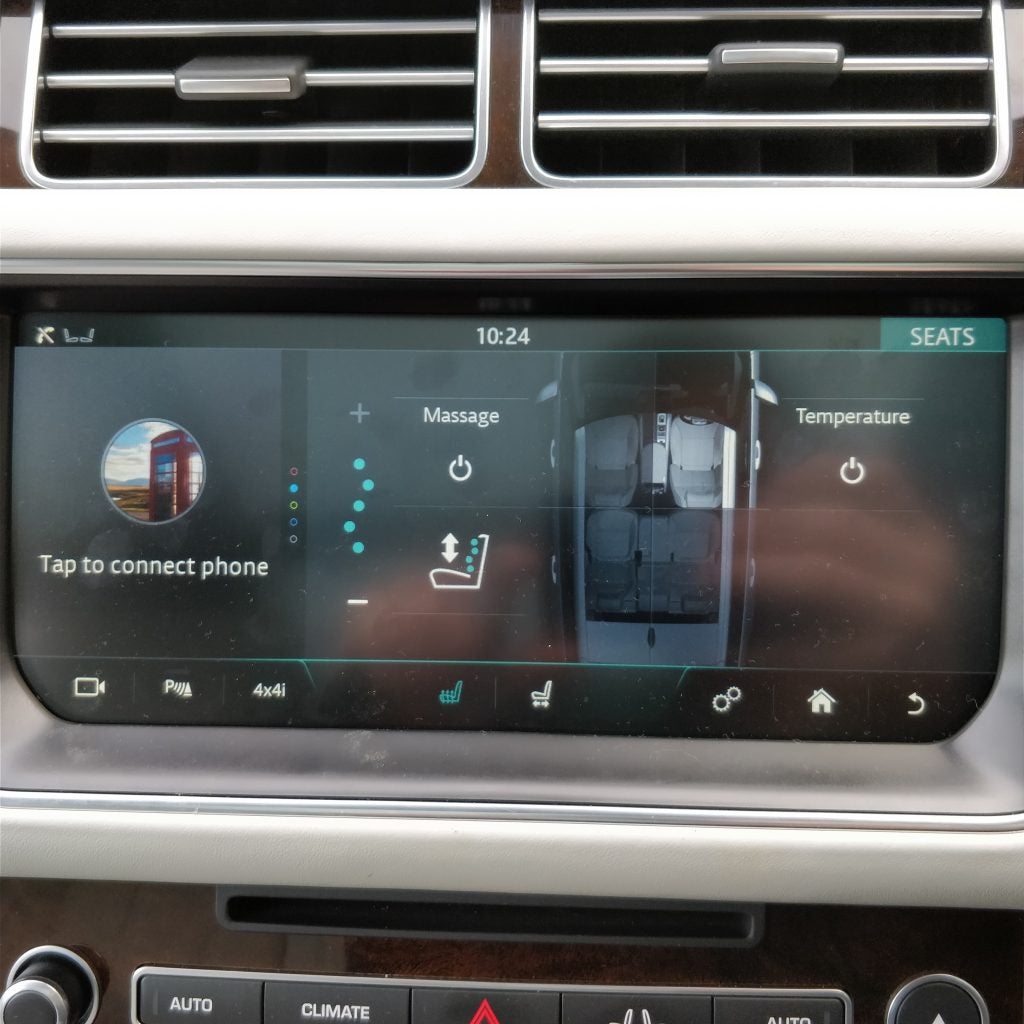 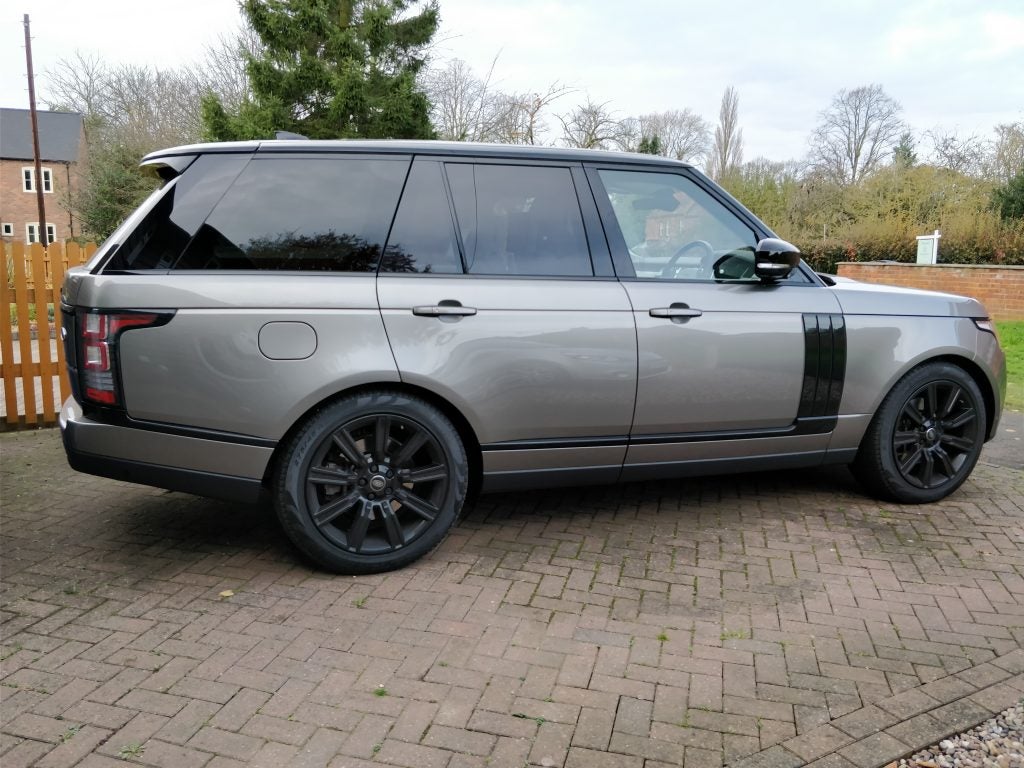 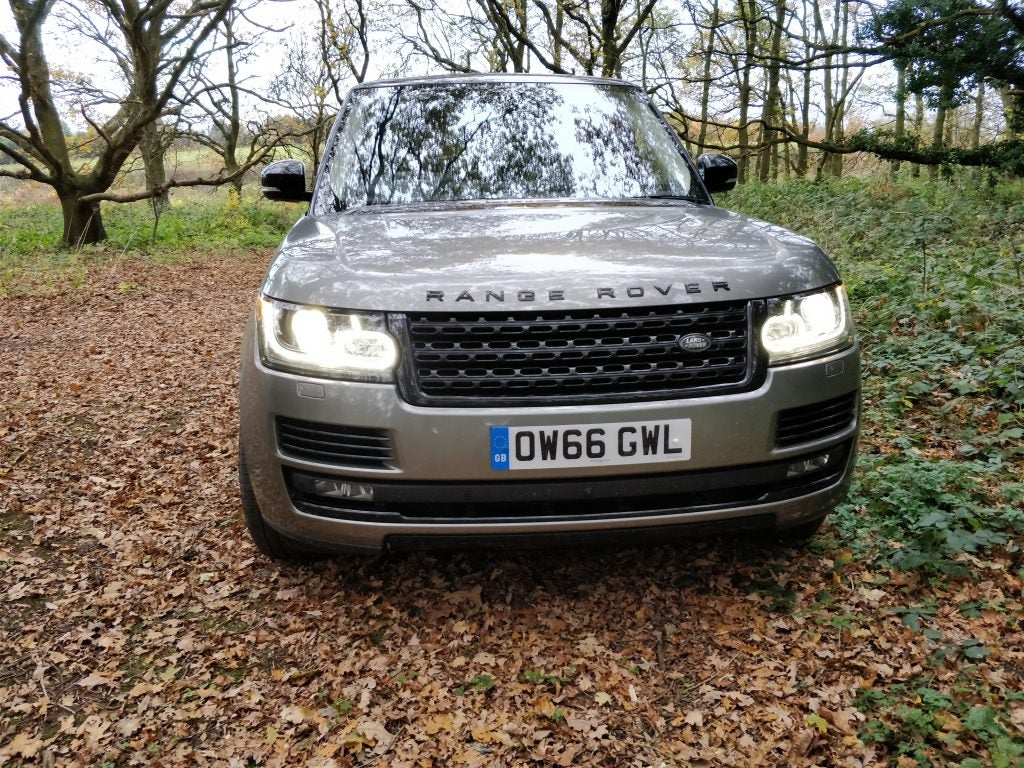 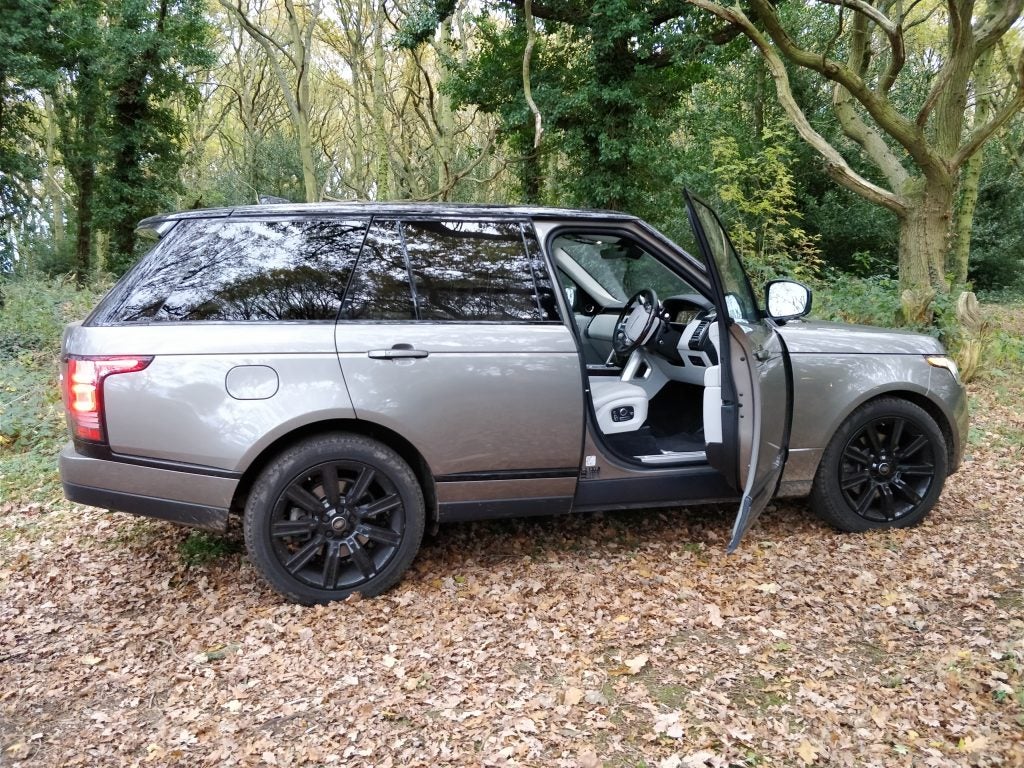 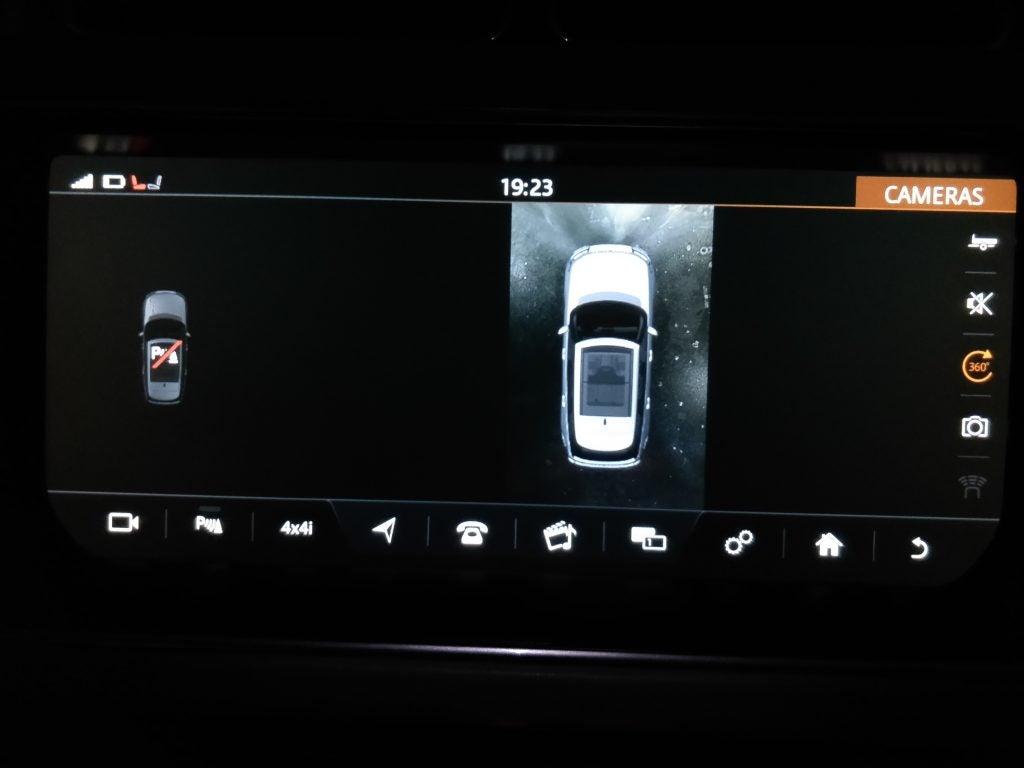 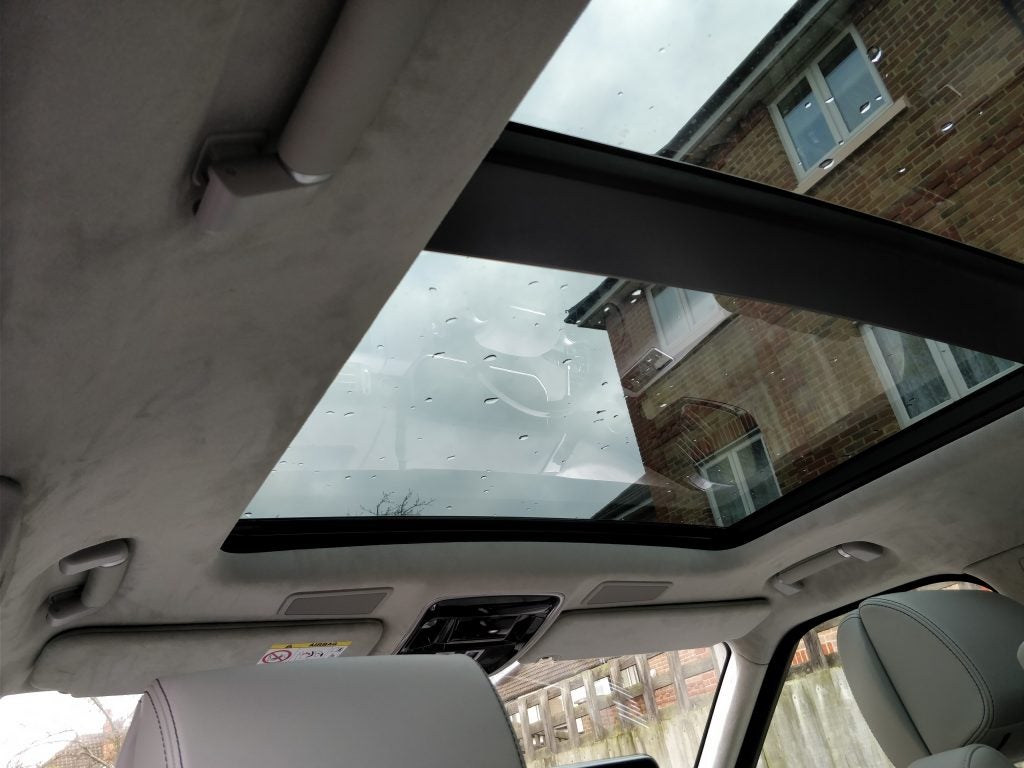 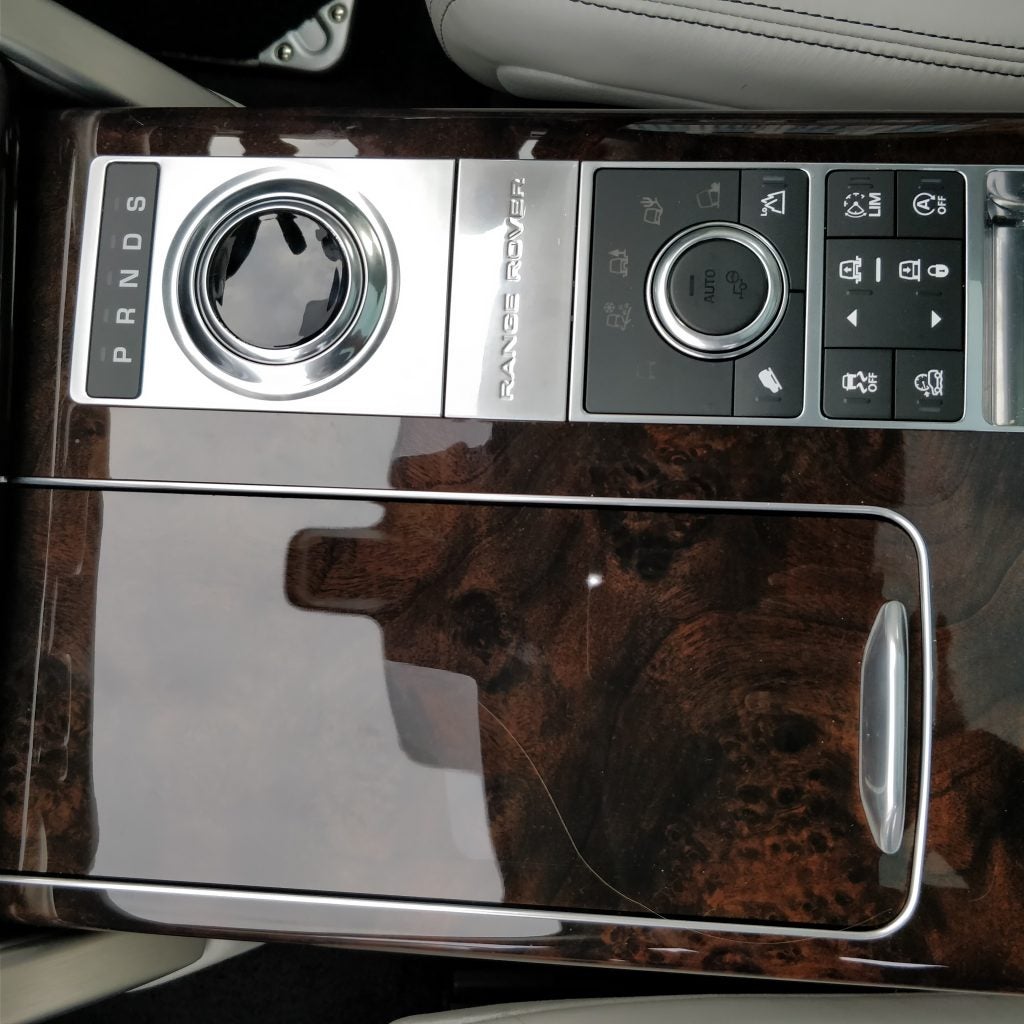 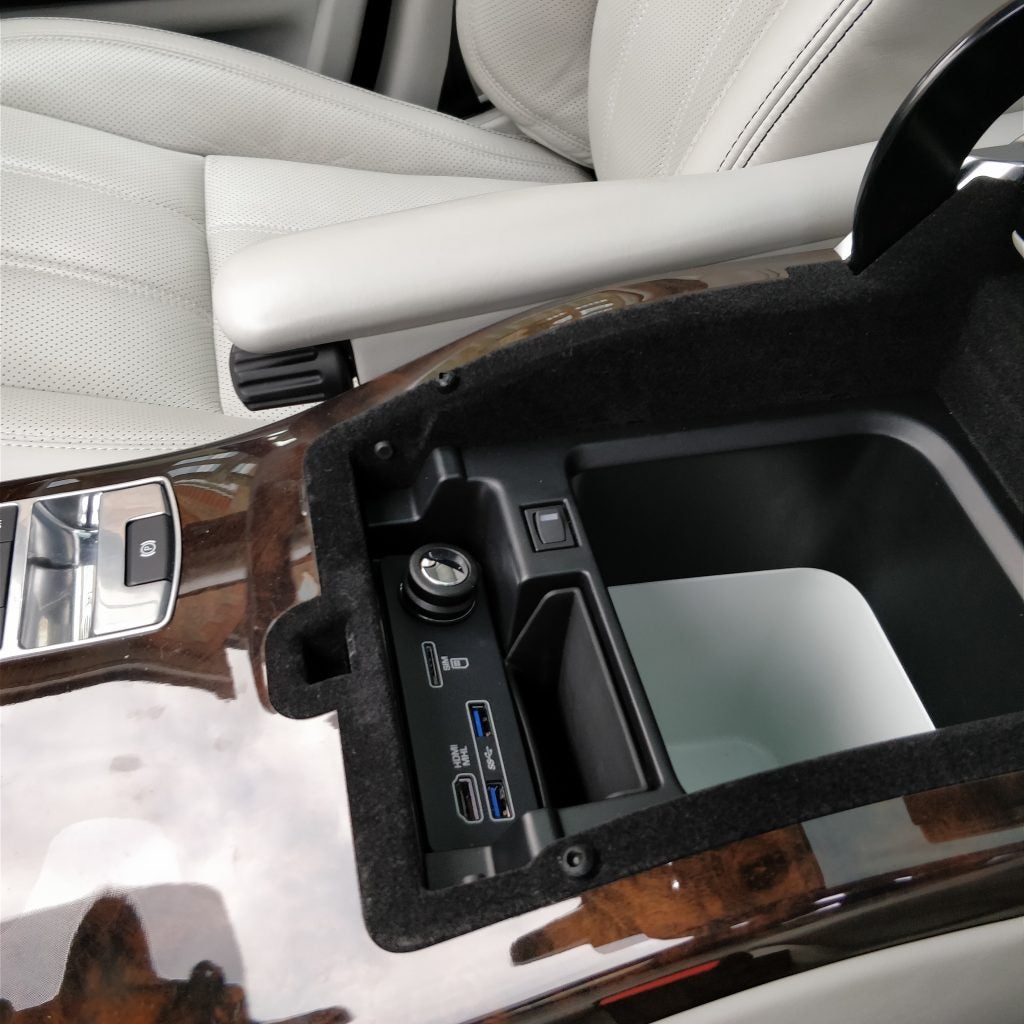 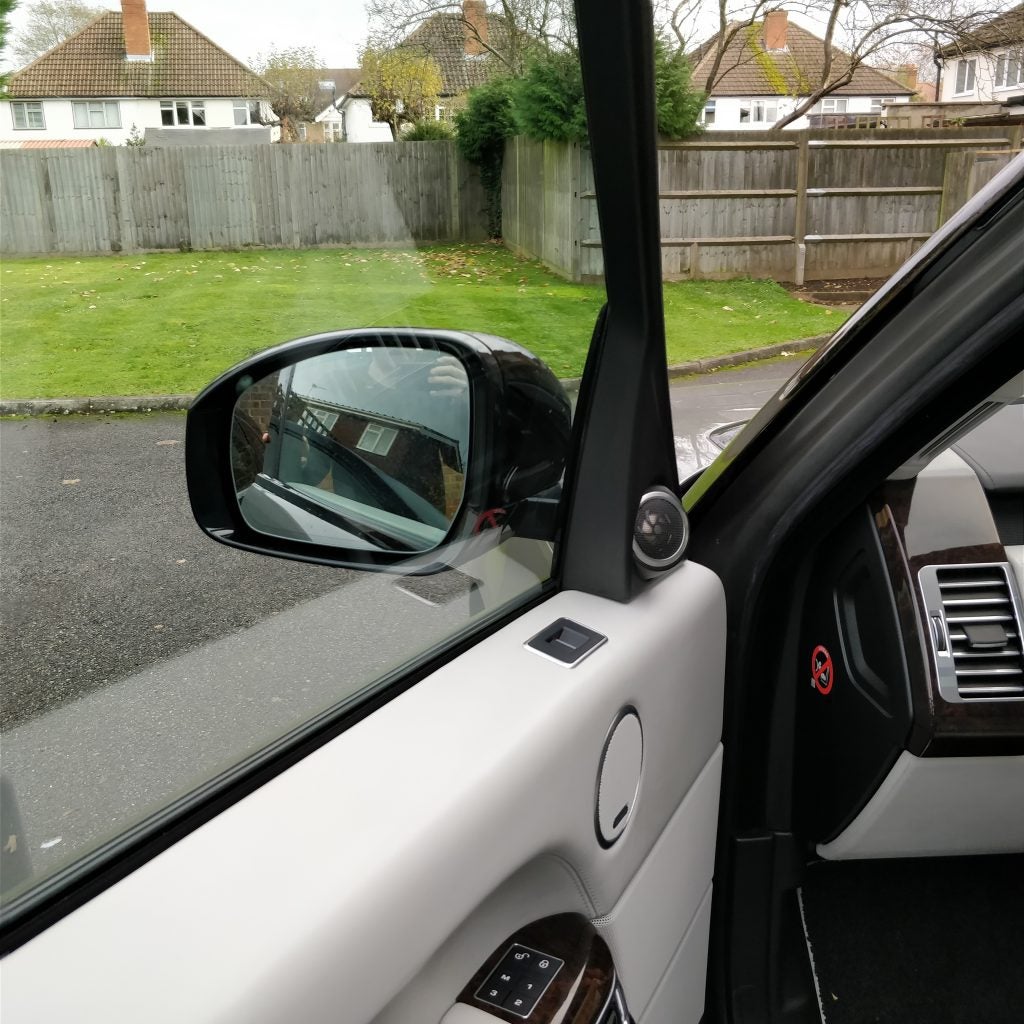 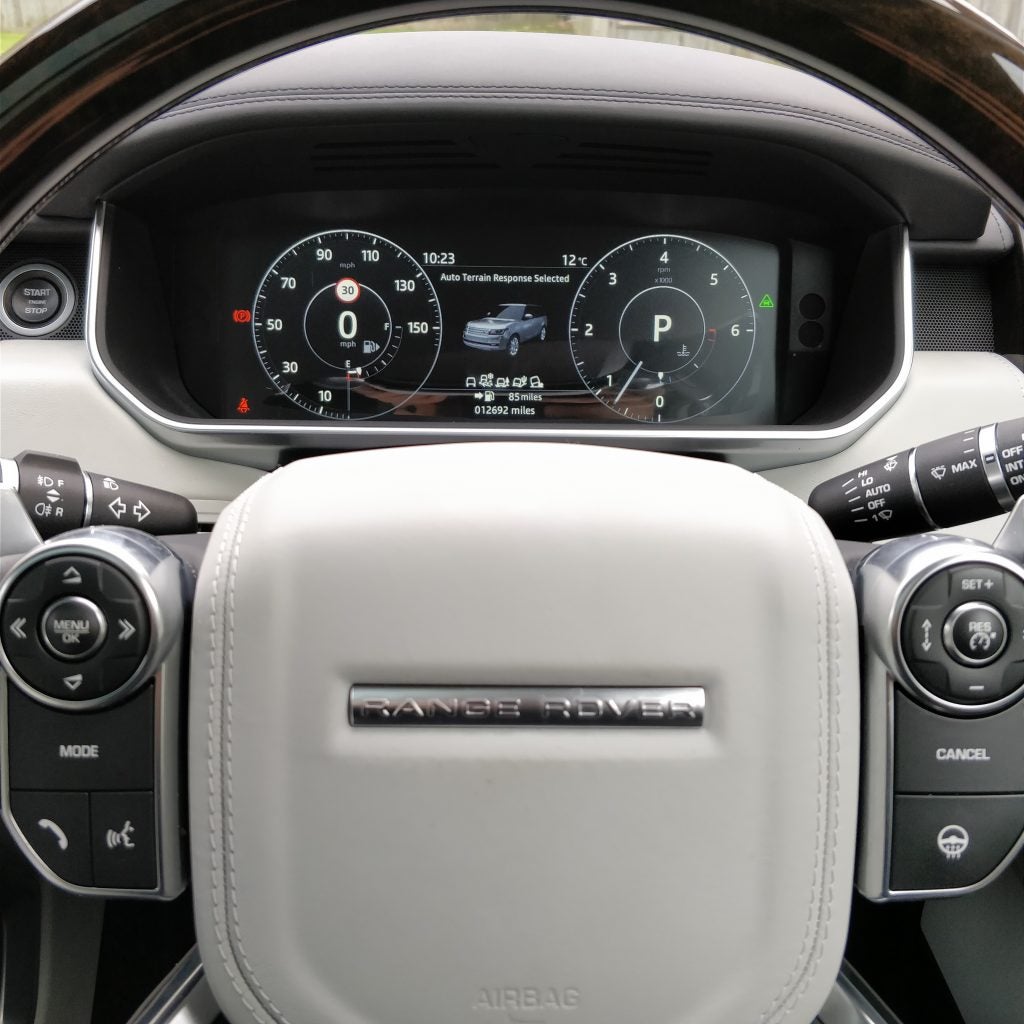