The next Rainbow Six Siege Season is nearly upon us, and Operation Wind Bastion promises to bring us something you don’t see often in multiplayer shooters, a touch of Moroccan flavour.

Trusted Reviews has all the info on Year 3 Season 4 of Rainbow Six Siege content, so read on to find out what you can expect.

There will be a full stream revealing the details of this new pack just before the Season 8 Pro League final taking place in Rio De Janeiro taking place over the weekend of November 16-18. The reveal will take place on the 18th.

A bit of guesswork here, but based on previous releases I feel fairly confident saying that the patch will hit the PC TTS (technical test server) on November 20th, before emerging across all platforms as a unified release two weeks later, on Tuesday, December 4th 2018.

During the two weeks on the TTS, expect changes to come rapidly as Ubisoft take on feedback and use data to see what works and what doesn’t. This is an iterative process however, as… well, most operators are a bit work in progress for their entire first season, with Grim Sky’s new additions Maverick and Clash both getting a bit of TLC during this most recent season. 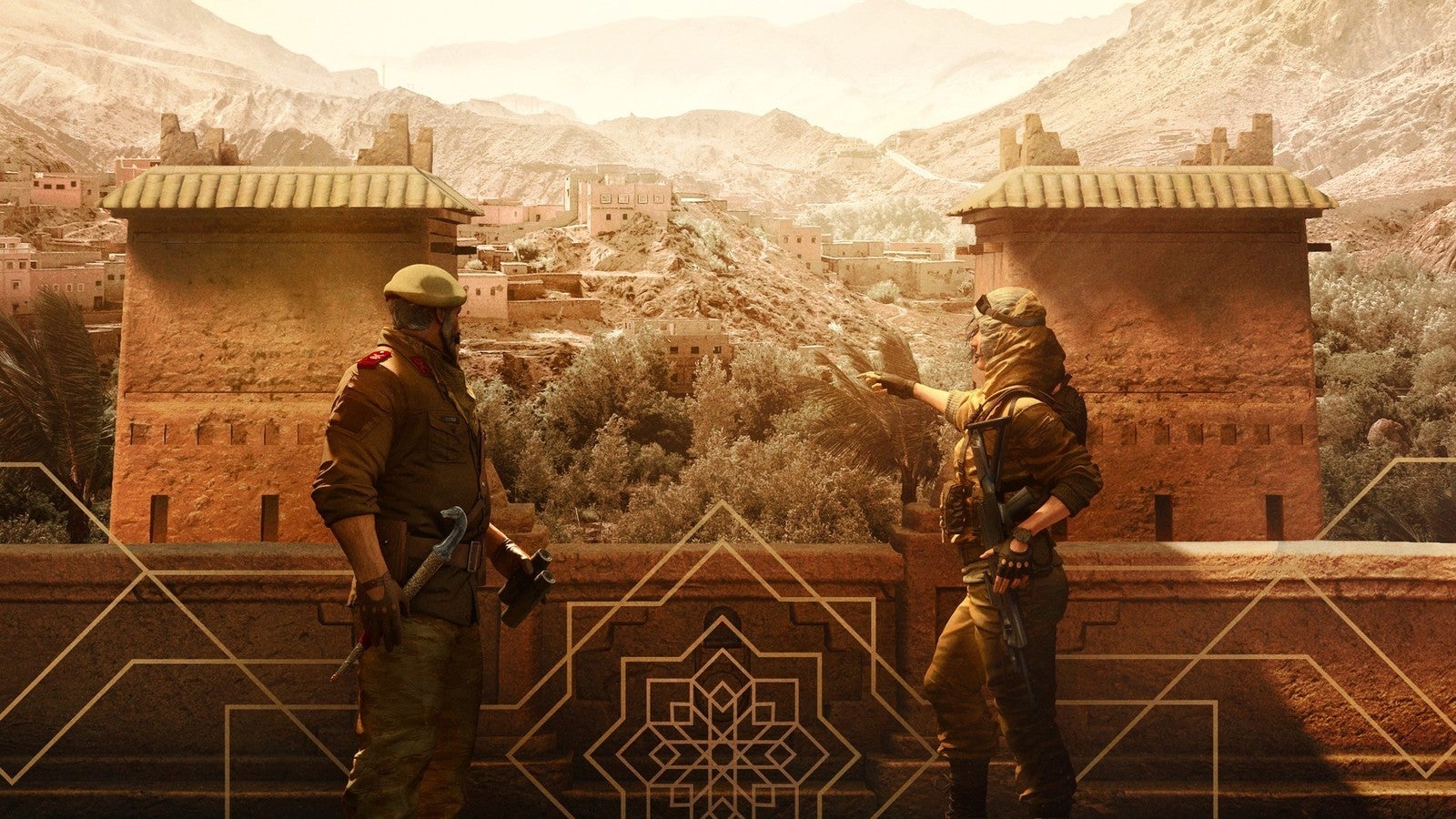 Both new operators hail from the Moroccan GIGR, part of the Royal Moroccan Army. We’re getting one new attacker and one new defender.

“The first Operator is a Defender and the Commander himself who is as stoic as the mountains are immovable. He is stationed at the country’s legendary kasbah, a training ground that has shocked and awed thousands of incoming soldiers. Strict and imposing, he inspires respect and has taken it upon himself to guide the future of Moroccan Special Forces.”

In the marketing materials, Kaid is positioned as a trainer, educating soldiers in how to be the best they can be and encouraging them to avoid relying on technology.

So, of course, in the teaser for the operator he’s shown using his ‘Rtila’ Electroclaw to electrify a hatch from the underside. Snark aside, there are several areas in the game, particularly the hatch above Drug Lab on Theme Park and the one above Laundry in Oregon that could really benefit from a gadget like this, although we’re still waiting for a hands-on before we declare it useful.

Here’s a teaser, showing the claw in action. Let’s be honest, in a game full of badasses this guy looks absolutely stone cold.

No word on weaponry yet, but if I were to take a wild guess I’d expect a submachine gun, maybe an Uzi, and a shotgun as is defender tradition. I could be wrong though, the last two defenders have really mixed it up with Maestro’s LMG and Clash armed with a ruddy shield and a wide repertoire of swear words.

Nomad hasn’t yet been officially released, but leaks have given us a pretty good idea of what’s going on with her, and er… she appears to have telekinesis.

Teased in a blog post, she’s described thusly: ““The second Operator is an Attacker who travels wherever the wind takes her. She’s among the few explorers who can cross the Sahara, climb up the Alps, trek through Asia’s rainforests, march along the Arctic Circle…and still return to her unit in operational shape. Perceptive and resourceful, she’s an expert on environmental operations with a knack for pushing the enemy back.”

A leaked trailer from Reddit seems authentic and shows the new defender moving through a beautiful corridor with a tactical AK variant assault rifle, firing out of shot. As she reaches the end, all of the enemies are blown out of hiding and into view behind her. You can see it here, but I don’t even want to speculate on how this could work until I’ve got my hands on it, because it looks wild.

In terms of guns, it’s a safe bet we’ll see this AK variant, but who knows what else they’ve got cooking up. The AK looks like an AEK-971, based on the skeleton stock, but it could also be an AK-74 or AN-94 with the stock changed. Ubisoft have used artistic license before, so it’s hard to guess based on the look alone. I’m doing it, though.

The GIGR use an F2000, would it be wrong to say I’m crossing my fingers that this makes an appearance? I’m doing it anyway, you can’t stop me. 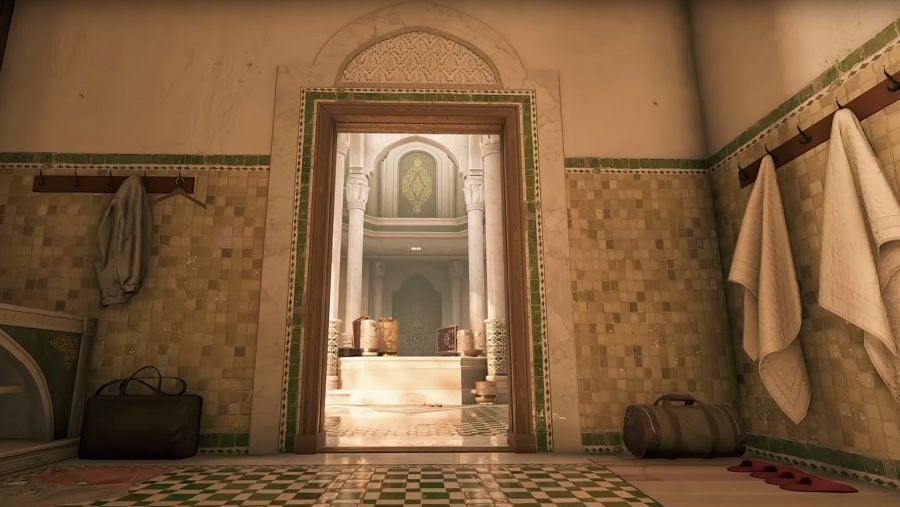 Seems like players will be rocking the Kasbah in this new map, as Wind Bastion will deliver players a map based around a mudbrick Kasbah, with iconic Moroccan architecture.

You can see more information in the below trailer, but the only real judgement call I can make based on this is that this particular Fortress is too nice to shoot up. I’ll be screaming ‘Watch the artwork’ as we push in on an assault, because I definitely can appreciate culture.

It’s got slight Border vibes, perhaps because both are set in hot sandy places with solid walls. However, while that was largely an administrative facility, this place looks much more decorative, with the trailer showing a particularly nasty staircase which looks like it’ll be a pain to plan around. Hopefully there will be more ways to get up and around.

Ubisoft has described this too, the scamps:

“A section of the Fortress is newly renovated, including the resident Commander’s office, bedroom, and private hammam. Players will find widespread use of decorative ornaments, luxurious furniture, painted ceilings and a massive chandelier. The zellige tilework, mashrabiya woodwork and marble surfaces are just some of the finishing touches to this section. There’s also a room dedicated to all the previous commanders. Their portraits adorn the walls, reminding all of the importance of tradition.”

“The other section of the Kasbah appears older and has yet to be renovated due to the constant flow of incoming soldiers eager for elite training. Rooms such as the dormitory, cafeteria and briefing room still show the original interior décor and furnishings of the Fortress. The Art Team aimed to make the two sections distinguishable from each other, allowing players to better orient themselves on this new map at any given time.”