Qualcomm is building fingerprint sensors that will work via our phone screens and arrive as early as Summer 2018, the company announced at MWC Shanghai today.

The series of next-gen sensors will adopt ultrasonic technology to scan fingerprints through glass, metal and phone displays, and will even work underwater or when a phone display is off.

What’s more, the sensors will also be able to detect a heartbeat and blood flow to add an extra layer of security – a feat that no other in-phone fingerprint scanner has achieved yet. The tiny bit of bad news is that the in-display sensors will only function with OLED screens, leaving LED screens out of the fun. 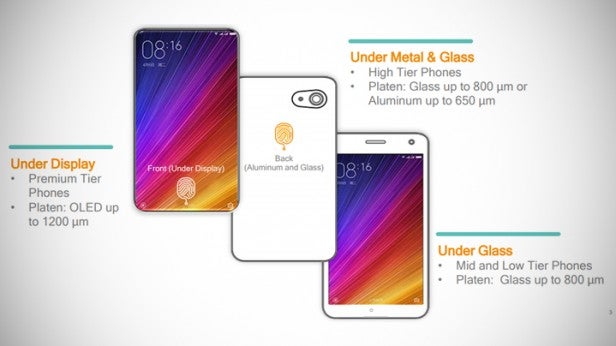 There’s no telling yet exactly which forthcoming flagship phones will carry Qualcomm’s in-display sensors, but the American tech giant said that it will begin shipping them in Summer 2018, while manufacturers can start considering them during Q4 this year.

The fingerprint sensors for glass and metal, however, are going to be offered to manufacturers this month, meaning we could see them inside smartphones in the first half of 2018.

One bonus with in-display fingerprint sensors is that they allow more flexibility for phone design – something we’ve seen proof of with recently leaked images of the forthcoming iPhone 8. If word from the rumour mill is true, the iPhone 8 will carry optical-based fingerprint scanning via its screen, freeing up more space for precious pixels, and becoming the first smartphone to offer under-the-screen fingerprint sensing.

Tell us what you think about Qualcomm’s in-screen fingerprint scanners in the comments.