Qualcomm at CES 2018 announced partnerships with both Jaguar Land Rover and Honda to put its technologies into their 2018 vehicles.

Update: Qualcomm has also announced a partnership with Ford for its Cellular Vehicle-to-Everything (C-V2X) technology.

While you might immediately think of smartphones when someone mentions Qualcomm’s Snapdragon processors, the company also has a range of automotive platforms using the now familiar name.

The company took to CES to announce is including its Snapdragon automotive platforms for both the 2018 Honda Accord and future Jaguar Land Rover vehicles, following 25 design wins in 2017. Qualcomm will be helping to power the advanced telematics, infotainment and digital cluster with integrated connectivity, and rear seat entertainment for future cars that have become increasingly tech-filled. 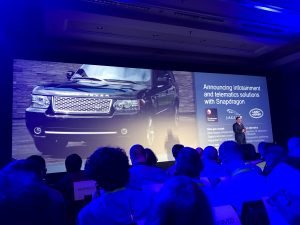 This means, in the case of Jaguar Land Rover vehicles, a combination of 4G, Bluetooth and Wi-Fi tech for connectivity throughout the vehicle delivered by a Snapdragon 820Am automotive platform. Inside will also be Qualcomm’s global navigational satellite system (GNSS) so vehicles will be more aware of their surroundings, which could mean big things for future autonomous vehicles.

While the fruits of Qualcomm and Jaguar Land Rover’s partnerships might be a little further out, anyone interested in a 2018 Honda Accord will already see the Snapdragon automotive platform in action. Qualcomm will again be powering the telematics, infotainment and navigation but there’s also a Qualcomm 4G LTE modem working in conjunction with Hondalink for vehicle connectivity. 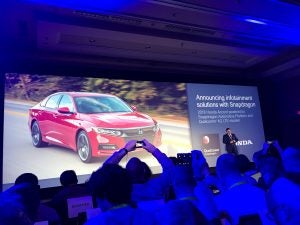 Qualcomm says this is all to support the demand for more personalised driving experiences from both drivers and passengers. The Premium-tier Snapdragon automotive platforms will also support machine learning and Snapdragon Neural Processing Engine. 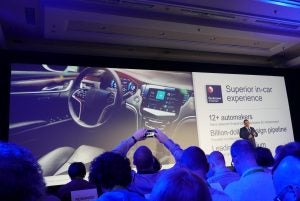 As with recent years, expect car connectivity to be a big trend at this year’s CES so check back for more CES car coverage over the next week.

Driving autonomous cars forward is a difficult prospect but Qualcomm’s partnership with Ford might well help move things along.

Called C-V2X, or Cellular Vehicle-to-Everything, the technology is about advanced wireless connectivity technology. The ‘everything’ part is important, as this is talking about how the vehicles of tomorrow can communicate from everything from other vehicles to infrastructure like traffic lights and pedestrian crossings.

Nakul Duggal, vice president of product management, Qualcomm Technologies, Inc described the relationship with Ford as “part of a leading effort in the automotive industry in accelerating the adoption of Cellular-V2X into production vehicles and providing for enhanced safety, driver assistance and support for autonomous driving.”

Imagine cars being able to tell other vehicles important data like their position, speed and intention, or a car being able to communicate with a traffic light up ahead to know that a red light is imminent so it’s not worth accelerating.

It’s these sorts of implementations that make C-V2X an important prospect for autonomous vehicles not only for safety but also traffic efficiency.

All of this is done without the need for a cellular network or cellular network subscription. Qualcomm says its C-V2X tech will be compatible with future devices, services and infrastructure that connect through 5G.

The first commercial solution of C-V2X is the Qualcomm 9150 C-V2X chipset, which should be available in the second half of 2018, which could mean we see them in Ford production vehicles in 2019.

Field trials should be happening in Ford vehicles in the first half of 2018, with Ford and Qualcomm collaborating on the first trials in San Diego with additional trials in Detroit.