The gaming landscape has changed. A new genre has stomped its way through the crowd to become a modern-day phenomenon. First came PlayerUnknown’s Battlegrounds, a title that quickly developed into the most popular game on Steam. Based loosely on Kinji Fukasaku’s 2000 movie Battle Royale, the game sees you take part in a 100-player online deathmatch on a giant island.

The second was Epic’s adaptation of its own game, Fortnite, which was initially overshadowed by other shooters when it first launched. Epic saved the game from fading into obscurity by adapting PUBG’s Battle Royale-style gameplay into a free-to-play game. It became Fortnite Battle Royale.

Here in early 2018 PUBG vs Fortnite is gaming’s mods vs rockers; you’re one or the other. Full disclosure, before writing this article I was a PUBG man. I’d played PUBG, alone and with friends, since early last year and saw no reason to explore Epic’s Pixar-tinged upstart with its building mechanics. But then I actually played it and found that, in truth, it’s a closer fight between the two than I’d expected. Here’s why… 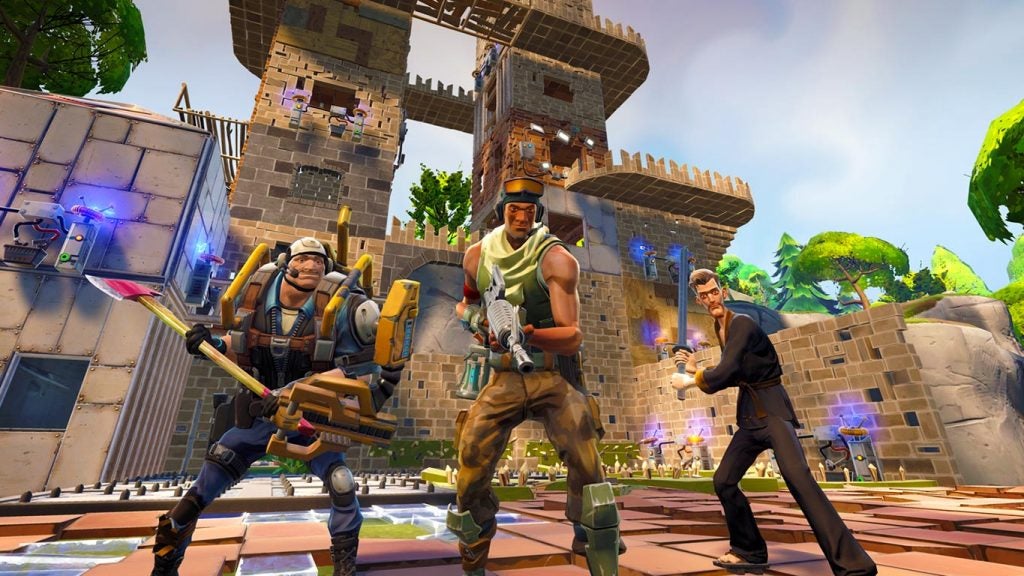 Tension is the crystallised essence of this genre. It’s the prevailing tension that makes crouching by a tree for five minutes fun. The gradual stake-raising that builds up each round as more and more hapless fools check out early and the total number of survivors tumbles. If you didn’t care about that tumbling number, or feel the ever-increasing value of your own survival, the whole endeavour wouldn’t work.

Both games manage to create this, using quite different methods. To my eyes Fortnite: Battle Royale has to work that bit harder to achieve tension because it’s seemingly played on an island from the Teletubbies universe and populated by refugees from Team Fortress 2. It’s disconcertingly cheery facade is the polar opposite of PUBG’s grim Eastern Bloc realism.

Fortnite: Battle Royale is tense, though, because its map is small and combat breaks out frequently. If you can hear a gunshot, the shooter is probably within aim. That’s absolutely not the PUBG way.

Tension’s created by prolonged, unbearable silences in PUBG. It’s created by having everything drawn out – the space, the gunfights, the time until the zone shrinks. Perhaps above all, it’s created by being grounded so closely in reality. Jumping 9ft in the air and shooting a man with your purple assault rifle isn’t tense in the same way that a frying-pan standoff between two chaps in their pants outside a petrol station is. PUBG wins. 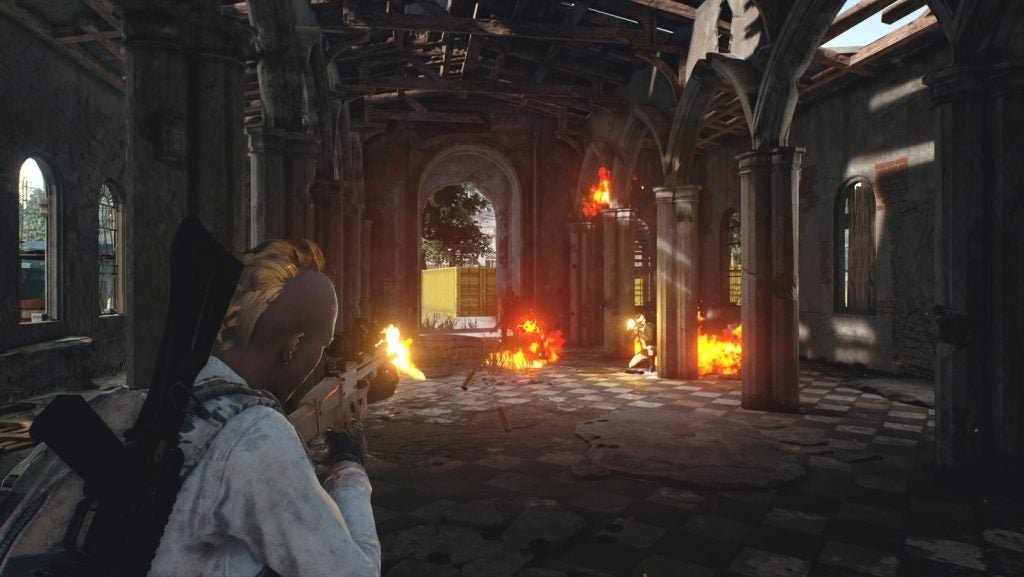 PUBG’s original map Erangel is an incredible place. It feels so real after you’ve spent a bit of time there, it’s a vast expanse that mixes huge open plains with claustrophobic dilapidated towns, ripe with potential dangers. It says a lot about how expertly designed that map is that it sustained gaming’s biggest community for almost a year, without any other maps in the rotation. And now Miramar, the second PUBG map, somehow dwarfs it, offering a welcome colour palette swap, some camper vans, and yet more darkly picturesque abandoned towns to pick through for AKM scopes.

Fortnite’s map, as I’ve mentioned, doesn’t do it for me. It feels like somewhere I’ve visited before in numerous fairly forgettable games. It’s a bit Minecraft, a bit Dead Rising, a bit – gags – Agents of Mayhem, even. As a platform for the action it works very well, but there’s just no sense of place or atmosphere.

The last five minutes in a battle royale game can be a little hit and miss. Usually in PUBG it’s eight people laying prone in a field, moving glacially slowly until one ends up accidentally army-crawling over another, and everyone’s reluctantly forced to open fire. It’s tense but is it also enjoyable? Mechanically satisfying? I’m not so sure it is. 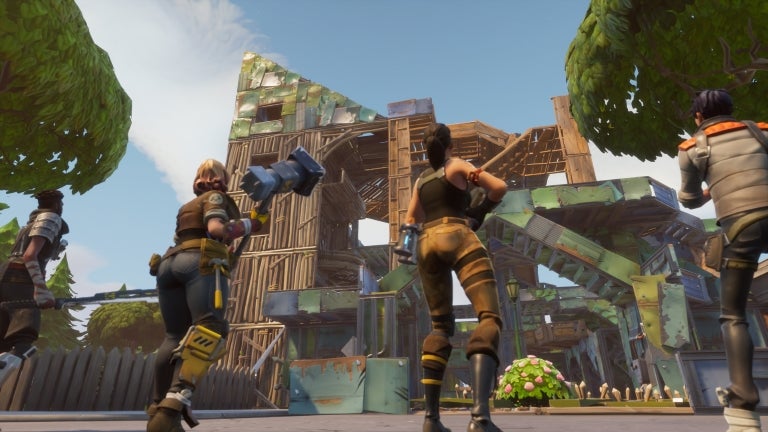 This is where Fortnite: Battle Royale’s building system comes into its own. The late game is generally fought in a bunch of cobbled-together forts, and that’s absolutely as great as it sounds. It adds an extra layer to combat, where skilful construction can give someone the edge over a more accurate opponent with a better gun. For a while, anyway.

Late game fort-building is also the area you simply can’t bluff your way through as a beginner. If you’ve spent the round diligently gathering wood and metal from trees and cards up to this point, it’s your time to shine. If, on the other hand, you’ve been running around, shooting people, and trying again and again to find the ‘prone’ button so you can lay still until you make the top 10 things will be hard for you.

This is a purely anecdotal assessment, but PUBG can go to hell at the moment when it comes to being punched to death the second you jump out of the plane, being shot through floors, being shot from straight-up nowhere, being snuck up on by Speedy Gonzalez, and being one-shot sniped by someone 6km away.

It’s a real problem. It was constant throughout Early Access and somehow feels more acute after final release. Maybe it’s simply about expectations: you expect a bit of jankiness and some dodgy deaths in Early Access, and when 1.0 rolls around they stick out that much more.

Epic has a similar problem with cheaters, and each month you’ll see news stories pop up about however many thousands of players have been banned. Except Fortnite: Battle Royale is a free-to-play game, so who knows what’s stopping players from simply creating another account and masking their IP.

On a completely anecdotal level, I didn’t perceive as big a cheating problem in Fortnite. Perhaps it’s more about the way the game’s played – quicker rounds, more player interaction, more combat makes cheating less obvious and less annoying – but I’m chalking this one up as an Epic win. 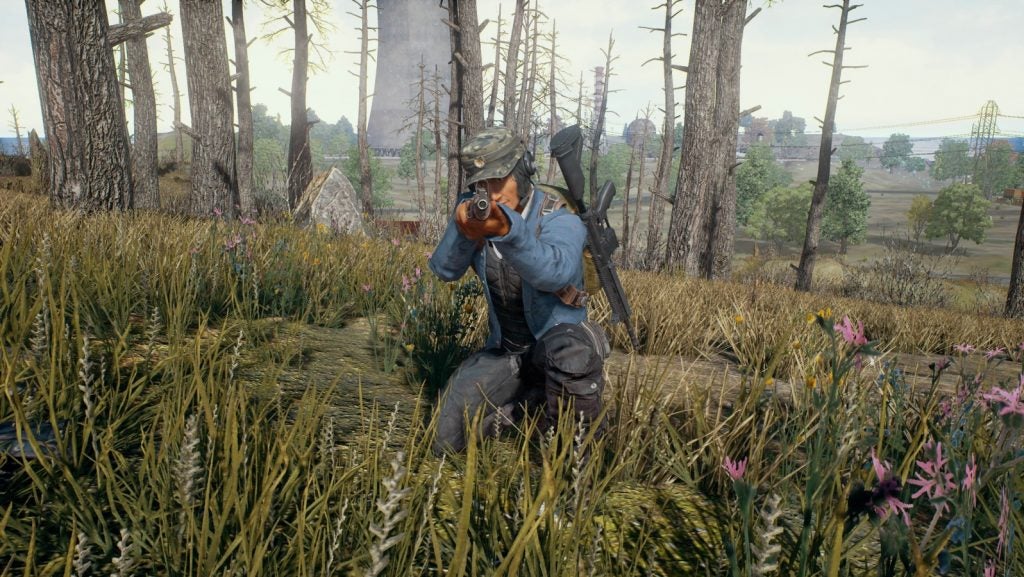 Did I say battle royale games were all about tension before? Don’t listen to me, I’ll say anything. Really they’re about their capacity to generate sweet ‘dotes for you and your squadmates. Remember that time we steamrollered some poor guy while barrelling down the mountain in a Dacia? No? Well you would have, if you were the one specific friend I’m thinking of who I did that with.

The point, naturally, is that PUBG is a deeply social experience, and its longevity owes a lot to those emergent moments of spectacle and hilarity that seem to crop up every round. The same’s broadly true of Fortnite, just to a lesser extent. And that comes down to the art direction again, for me.

The aesthetic of Fortnite: Battle Royale is very much ‘Wheeeee! This is going to be fun, look! Look how much fun!’ And part of me bristles at that. I want to decide whether it’s fun or not, alright? It’s like being told by some overbearing coworker to ‘smile, it might never happen! Hahahahaha!’ That’s Fortnite’s cutesy look. 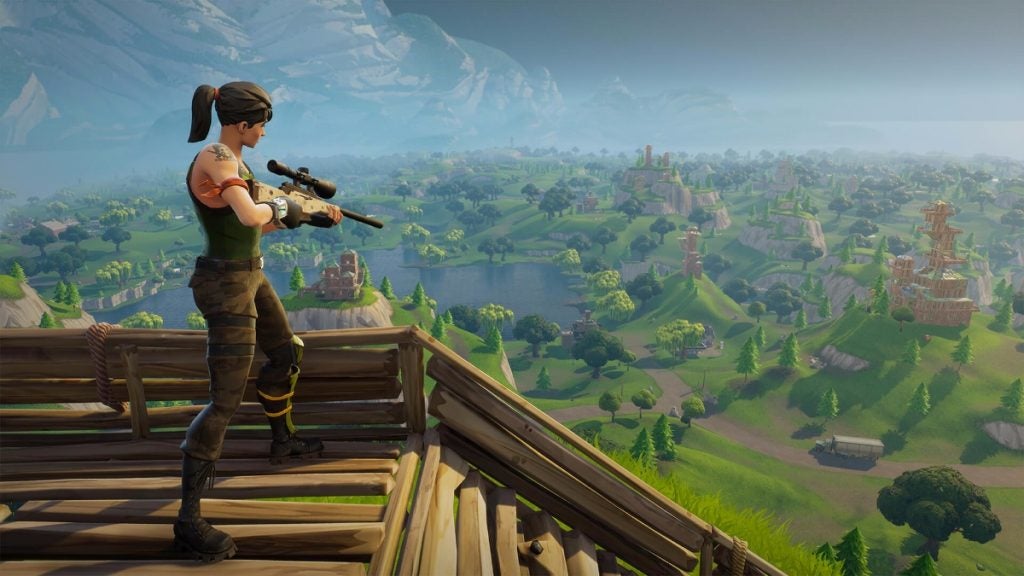 When something funny happens in PUBG, it’s delivered with a standup comedian’s deadpan. So you backflipped a motorbike and landed on your spine, downing you and your passenger? PUBG doesn’t say any more about it. You’re dead, pal. Back to the main menu for you. When something wacky happens in Fortnite: Battle Royale, it’s that bit harder to enjoy because the game’s already tried to make walking, jumping, and swinging a pickaxe appear wacky.

It’s a win for the community as much as anything. Fortnite: Battle Royale has an entire extra layer of complexity in that building system, and it still can’t compete with the subtlety of leaving a door open or closed in PUBG. The community has employed all manner of sly, underhanded, Machiavellian strategies to gain an advantage, from baiting houses by dropping desirable kit inside them and then waiting upstairs to playing dead in the prone position and springing up from under vehicles. It’s not that the game itself is to tactically rich, but rather that the players are so imaginative.

Construction is the outlet for that imagination in Fortnite: Battle Royale, and inevitably its best players make themselves known in that space. Shooting out base floors from underneath players is satisfying on a cellular level, and making a nice, friendly wall just in front of a downed squadmate to revive them from behind is a hero play to savour. But they’re just not on the same level as leaving a door open or closed in PUBG. Sorry.

This is too close to call, despite the fact that these two games couldn’t feel more different to control. PUBG feels like wrestling a sentient fridge into doing what you want, and Fortnite is so slick and simple it almost feels flimsy. It comes down to whether you prefer adjusting zeroing distances on your scope, or watching numbers fly off above the heads of your enemies as their hit points scatter through the air.

Honestly, I don’t have a preference. I do know that Fortnite: Battle Royale is a great big palate-cleanser after 100 hours of PUBG – it feels amazing to get a few kills every round, even when you’re not playing very well. But winning a firefight in PUBG is so difficult that it inevitably feels like more of an achievement.

You could make a case for Fortnite: Battle Royale being the more mechanically accomplished and polished in this regard, and I’d back you up on it if you did, but that doesn’t necessarily make the fighting more fun.

It’d be easy to look at Fortnite: Battle Royale and say ‘I bet they just copied Battlegrounds because it’s so popular’, because that’s pretty self-evident. But Epic deserves a huge amount of credit for creating such a different experience by tweaking just a few variables. It plays at such a faster pace, with more of a risk-taking spirit. Add to this its lovely base-building crescendo and you could easily justify playing PUBG and Fortnite alongside each other in the long term. They’re cut from the same cloth, no doubt, but the results vary more than it might appear.