Pokemon GO might want to make some room on the mobile gaming throne, since DeNA’s effort might be keen to sit alongside Niantic’s million-making juggernaut. Acting as a more traditional entry in the role-playing series, Pokemon Masters is making its way to iOS and Android in the coming months, and it looks like a lot of fun.

Announced during the Pokemon Press Conference earlier this year, Trusted Reviews has compiled everything you need to know about Pokemon Masters including all the latest news, release date, gameplay, trailers and more.

Pokemon Masters release date – when is it coming to iOS and Android?

Masters is expected to launch for iOS and Android on August 29, 2019, although may land at any point during Q3 2019, so we’ll be sure to keep this page updated.

If you’re eager to download Pokemon Masters the moment it drops on your respective platform, you can register interest on Google Play Store now.

Pokemon Masters trailer – How does it look?

We’ve compiled the cinematic anime trailer and gameplay overview video below, both of which provide a good idea of what to expect from Pokemon Masters.

Pokemon Masters gameplay – How does it play?

DeNA’s Pokemon Masters is a real-time action RPG that places a keen emphasis on 3v3 player battles both against AI opponents. We’ll provide more concrete details on PvP elements once we have them.

Unlike Pokemon GO, its battle mechanics will be far more in-depth, providing different avenues beyond tapping the screen and spamming items. It seems you’ll team up with different trainers throughout your journey, each with their own stories to tell and Pokemon to fight with.

There’s even some familiar faces if you’re a hardcore fan of the Pokemon anime series, with the likes of Brock, Misty and Rosa making an appearance. It seems they’ll all use specific Pokemon during battle (known as Sync Partners), although they might be able to evolve as you progress. Speaking of progress, your main goal in the game is to ascend the Pokemon Master League, eventually emerging as champion. Your partner for the League is none other than Pikachu, because of course it is.

Masters will take cues from Game Freak’s line-up of iconic RPG titles, in that you’ll be earning Gym Badges while moving up the Pokemon Master League, eventually culminating in an epic showdown of sorts. All of this will be against AI opponents, as specific details regarding PvP mechanics are yet to be confirmed. 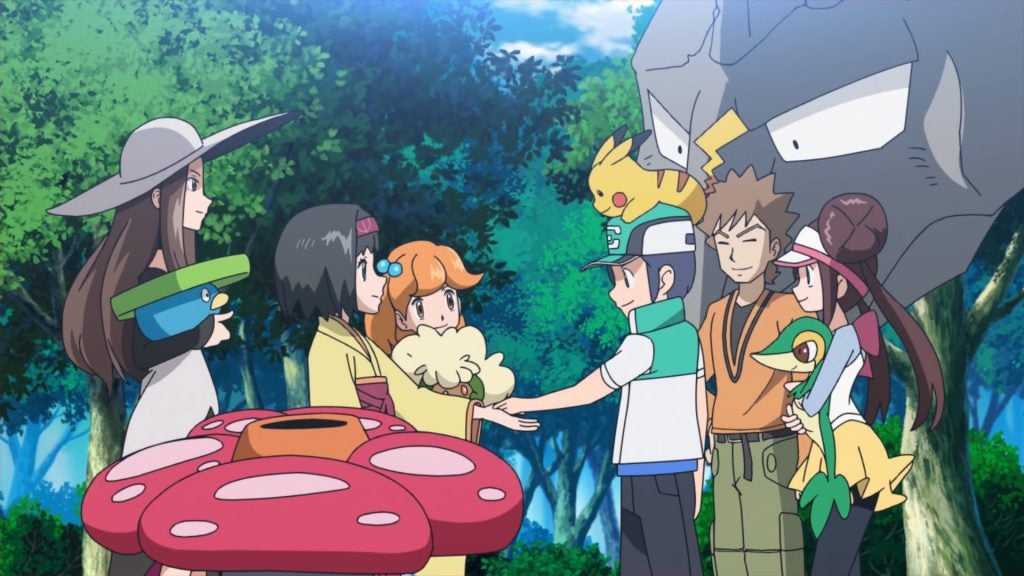 Aside from collecting badges and partaking in battles, you can also make new friends with trainers spread across the world. This is done through dialogue choices that can increase affinity with characters which, with any luck, will also lead to some nice advantages in trainer battles. Each trainer levels in up a traditional RPG manner, so there’s an incentive to combat outside of Master League.

This is a mobile game, so playes can expect a stream of regular challenges they can complete on a daily, weekly and monthly basis. Each of these come with experience and other rewards, offering us a reason to log in everyday to hone our Pokemon skills. I honestly love the aesthetic Pokemon Masters is going for, striking a nostalgic chord, reminding me of when I watched the anime as a little girl with my siblings.