Eevee is one of the more adaptable creatures in Pokémon Go, but how do you make sure you get the right evolution? We’ve got you covered. Here’s how to get the Eevee evolution you want – plus what the Generation 2 update will bring.

By now, you probably know that Eevee is one of the toughest critters to evolve, but there’s plenty more evolutions to look forward to.

In fact, Niantic has finally gifted Pokémon Go players with a major update that introduces 80 new animals from the Gold and Silver video games, i.e. Gen 2. That means more evolutions for Eevee

Scroll down for our full guide to evolving Eevee in Pokémon Go.

Eevee evolution – Gen 2 is here, and that means Espeon and Umbreon evolutions

Niantic has finally updated the game to include creatures from Gen 2, which means Eevee gets some new evolution options. Specifically, players should now be able to evolve their Eevee into either Espeon or Umbreon. Espeon is the “Psychic” version, while “Umbreon” is the Dark alternative.

Here’s the official description for Espeon from the Pokémon site: “Espeon is extremely loyal to any Trainer it considers to be worthy. It is said that this Pokémon developed its precognitive powers to protect its Trainer from harm.”

And here’s the lowdown on Umbreon: “Umbreon evolved as a result of exposure to the moon’s waves. It hides silently in darkness and waits for its foes to make a move. The rings on its body glow when it leaps to attack.”

How do you make sure you evolve Eevee into the right one? Well, it’s probably just a case of naming them, as with the other Eevee evolutions, in the right way. It’s likely you’ll have to name Eevee after the right trainer name from the original Pokémon show. That means “Sakura” or “Sayo” for Espeon, and “Gary Oak” for Umbreon.

Before you do that though, you might want to wait for confirmation, as the update hasn’t rolled out fully yet, so we’re waiting to verify whether this is indeed the right way to do it. Stay tuned.

Evolutions to expect in Pokémon Go

At San Diego Comic-Con 2016, Niantic strongly hinted that there were plans afoot to release even more Pokémon into the Pokémon Go Pokéverse – and to deliver further progressions for the existing monsters.

This is what to expect from the next generation of Pokémon evolutions in Pokémon Go, starting with an old favourite…

This purple bat is the final form of Zubat and can be acquired by evolving a Golbat, though you’ll need a high friendship level and plenty of candy to get hold of this Gen II critter.

Evolving Slowpoke to Slowking is likely to be a tricky one. In the second-generation Pokémon games, getting the royal bipedal beast involved trading the Pokémon whilst it was holding a King’s Rock.

See the problem? Yep, trading isn’t currently a feature in Pokémon Go, but we’d hope to see this fan favourite function arrive in the near future

Steelix evolves from rock snake Onix when traded holding a Metal Coat. Again, trading is a feature we’re hoping to see introduced to Pokémon Go sooner rather than later.

Eevee was the first Pokémon that was able to evolve into several different creatures. This bushy-tailed Pokémon can become either Vaporeon (water-type), Jolteon (electric-type), or Flareon (fire-type), marking it as a seriously versatile companion.

These first-generation evolutions are all available on Pokémon Go, but you’ll need three different Eevees to evolve if you want them all. In the video games, it’s easy: you just apply a thunder stone, fire stone, or water stone depending on the evolution you want.

But in Pokémon Go, the eeveelution is entirely random. Your Eevee has a one-in-three chance of turning into the Pokémon of your desire. So there’s every chance you could end up with three Vaporeons and two blank spots in your Pokédex.

Fortunately, there’s a neat little cheat to get around this…

How to choose Eevee evolution in Pokémon Go

If you want to choose your Eevee evolution in Pokémon Go, you need to rename your Eevee before you evolve it:

There’s a catch, however. You can’t do this twice in a row with the same evolution. For instance, if you evolve three Eevee named Rainer, you’ll get Vaporeon>Random>Random. But if you do Rainer>Pyro>Rainer, you’ll get Vaporeon>Flareon>Vaporeon. Make sure you don’t get caught out by this if you’re trying to stack up the same type of Eevee evolution. 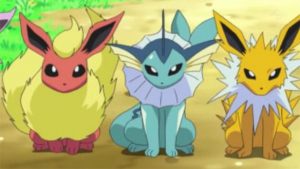 These are the names of three brothers who appeared in the original anime series, each of which owned their respective corresponding Eevee evolution. This trick isn’t explicitly described in Pokémon Go, but some enterprising players managed to work it out.

If you’re struggling with battery power on your quest to find and evolve Eevee, which you probably are as the game is a massive power hog, you might try one of these great battery packs:

What about Eevee’s other evolutions?

Any respectable Pokéfan will know that Eevee actually has more than three evolutions. In fact, Eevee can become any one of eight different Pokémon.

Unfortunately, the remaining five Eeveelutions are not first-generation Pokémon, which explains why they’re currently unavailable in Pokémon Go: 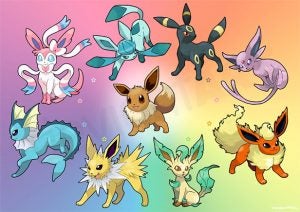 Will these other Pokémon ever be available in Pokémon Go? Well we’re not entirely sure. At this year’s San Diego Comic-con, Pokémon Go’s creators said that second-generation Pokémon would be added a little at a time in “interesting ways”.

Unfortunately, that’s not very definitive, so we can’t say for sure when (or if) Eevee’s five remaining evolutions will make it to Pokémon Go.

What would you like to know about Pokémon Go? Let us know in the comments, and we’ll do our best to get back to you.