The Pocophone was a very popular mid-range device among smartphone enthusiasts, so can the brand replicate its success with the new Poco X2?

Announced in India on February 4, the Poco X2 boasts a smooth 120Hx display, a Snapdragon 730G chip, and a 64-megapixel camera and all for a winning price. Read on for the full specifications.

The Poco X2 was announced on February 4, and it will become available to buy in India from February 11 via FlipKart.com. We don’t yet know when or if the device will be released in the UK and Europe, as it may remain exclusive to India.

You can watch the recorded livestream of the launch event via the embedded video below:

There are a total of three spec variants of the phone, which are priced as follows:

There are three different colours to choose from: Phoenix Red, Atlantis Blue, and Matrix Purple.

The Pocophone has four rear cameras and two selfie cameras, which are embedded in a cut-out section of the screen, similar to the Samsung Galaxy S10 Plus: 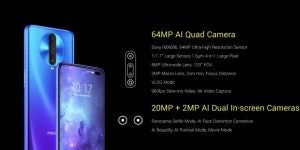 The rear camera module is led by a Sony IMX 686 sensor with 64-megapixel resolution, and it’s complemented by an 8-megapixel ultrawide lens, a 2-megapixel depth sensor, and a 2-megapixel macro lens.

The two front-facing cameras have a resolution of 20-megapixels and 2-megapixels. 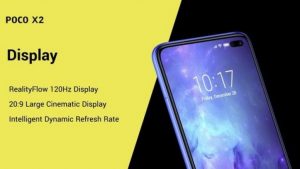 The X2’s screen measures 6.67-inches diagonally and has a Full HD+ resolution, as well as supporting HDR 10. But perhaps the standout is the fact it has a 120Hz refresh rate, which exceeds that of even the OnePlus 7T Pro and Google Pixel 4 and is equalled only by dedicated gaming phones such as the Asus ROG Phone 2 or the Razer Phone 2. The higher refresh rate should enable even smoother scrolling – hence the company’s cringeworthy hashtag for the launch event: #SmoothAF

Aside from the camera and the screen, there’s still a lot to get excited about when it comes to the Poco X2.

Most important is the Snapdragon 730G chipset, which might actually be a little disappointing for Poco-fans; the previous installment in the series, the Pocophone F1, boasted a flagship Snapdragon 845 chip. Nonetheless, it is still an incredible specification for the price.

The X2 has a battery capacity of 4500mAh that can be topped up via 27W charging.  Don’t worry about the handset getting too hot; it’s got liquid cool tehcnology, which the brand claims can dissipate heat 300% more quickly.

Other features include a side-mounted fingerprint scanner, and the return of the 3.5mm headphone jack.