We’ve hit the meteorological season known as ‘Photokina’ when it starts raining new cameras and photography fans dash outside to reenact Andy Dufresne’s face-to-the-sky escape scene from Shawshank prison. These are our picks for the top new Photokina 2018 cameras based on the launches so far. All the Photokina news you need is right here in one handy place.

So which new cameras should you be getting excited about? There are quite a few new contenders, from new Medium Format beasts to cheap instant cameras with new digital smarts.

We’ll be scouring the floors of the Photokina show in Cologne over the coming days, but here’s all the latest Photokina 2018 news and camera highlights so far. 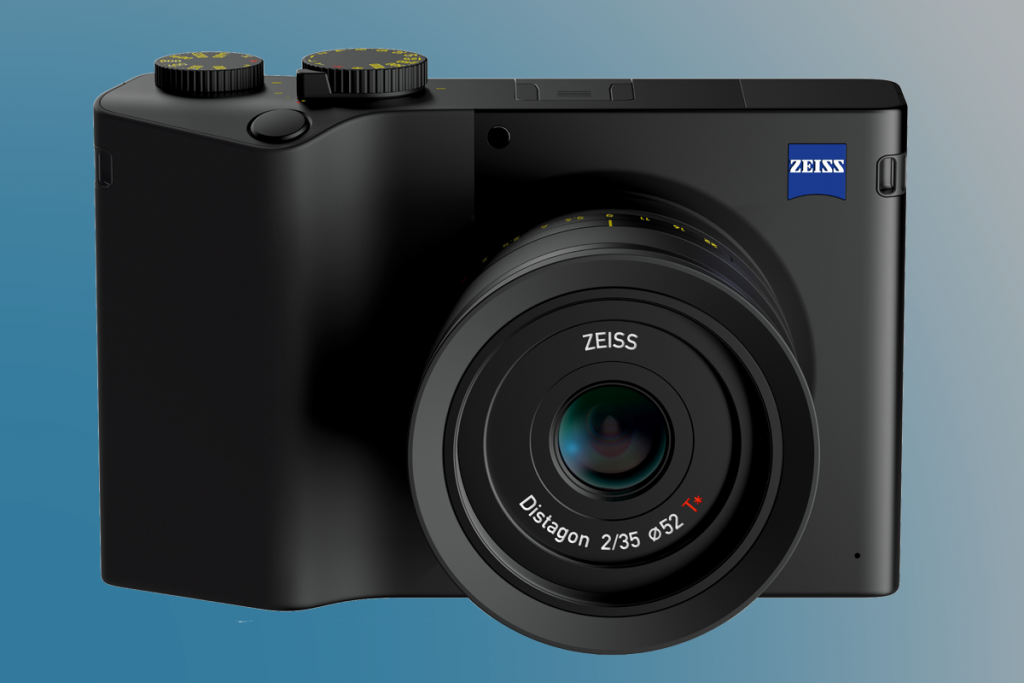 The title of ‘least expected camera of Photokina 2018’ undoubtedly goes to the Zeiss ZX1 – it’s a full-frame compact camera with 512GB of internal storage and built-in Adobe Lightroom.

Like a cross between a Sony RX1 and Leica’s TL2, the ZX1 embraces the ‘smartphone meets compact camera’ concept with unexpected relish, letting you edit and upload photos straight to social media without any app-based faff or misplaced memory cards.

The downside is that it’ll likely cost thousands when it goes on sale in”early 2019″, but we’ll bring you our verdict before then to let you know whether it’s time to cancel Christmas and start saving. 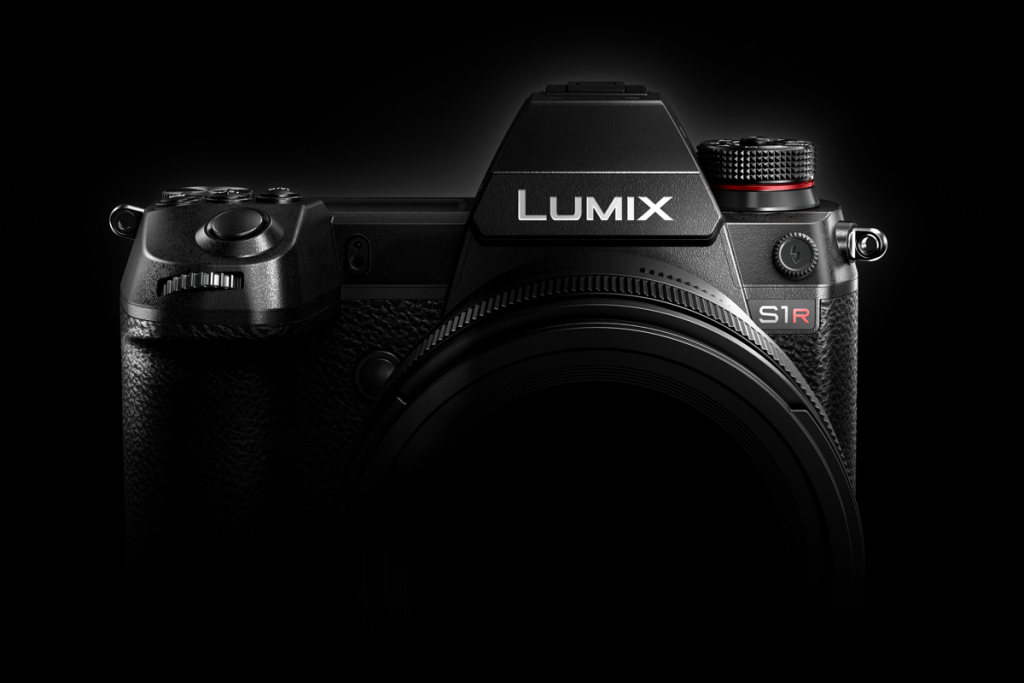 There’s no doubt about the crowd-pleasing stars of Photokina 2018 so far – following Leica, Sigma and Panasonic’s announcement of their full-frame ‘L Mount’ partnership, the latter showed off its two flagships for the new system.

The Panasonic S1R (and its cheaper S1 brother) are both full-frame cameras with the L Mount, which has been licensed from Leica and will be supported by lenses from Sigma. The 24-megapixel S1 is aimed at anyone looking for an full-frame all-rounder, while the 47-megapixel S1R is very much for professionals and will take on the likes of Sony’s A7R III.

Details so far are thin on the ground, but both cameras will be able to record 4K at 60fps (a first for mirrorless full-frame cameras) and will be available in “early 2019.” 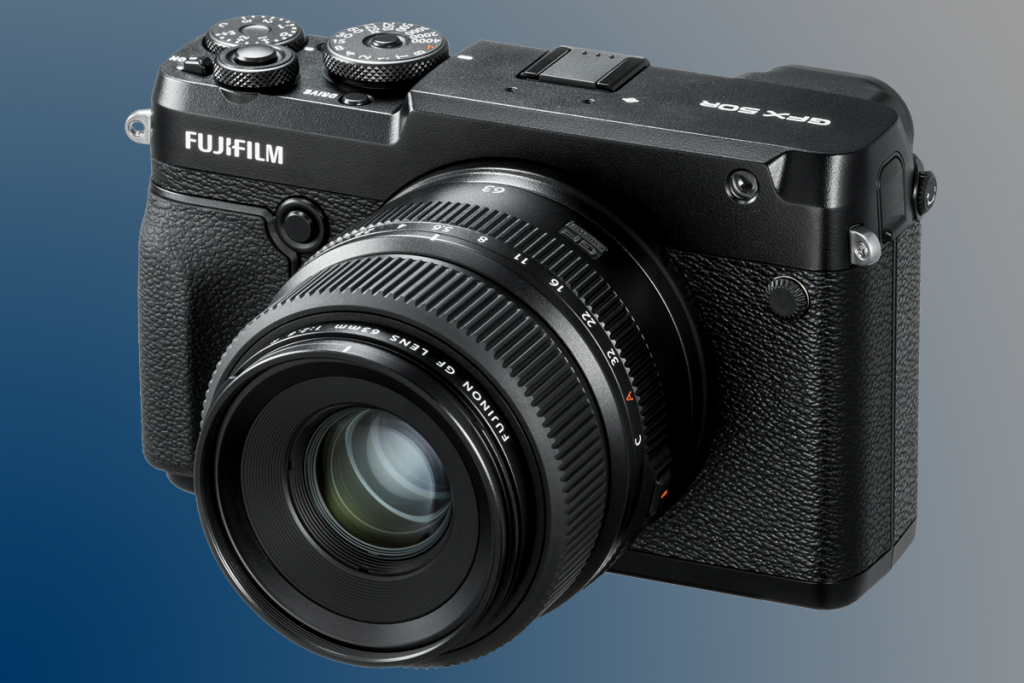 Our wallets might not be too keen on the idea of spending $4,000 on a new camera, but that won’t stop us dreaming of owning the Fujifilm GFX 50R. Like a rangefinder crossed with a traditionally brick-like Medium Format camera, the GFX 50R is surprisingly small and light for a camera that houses a 51.4-megapixel sensor.

A dream for landscape photographers and wildlife shooters, it’s thinner and lighter than Fujifilm’s own GFX 50S and will go on sale in November 2018. Time to get saving. 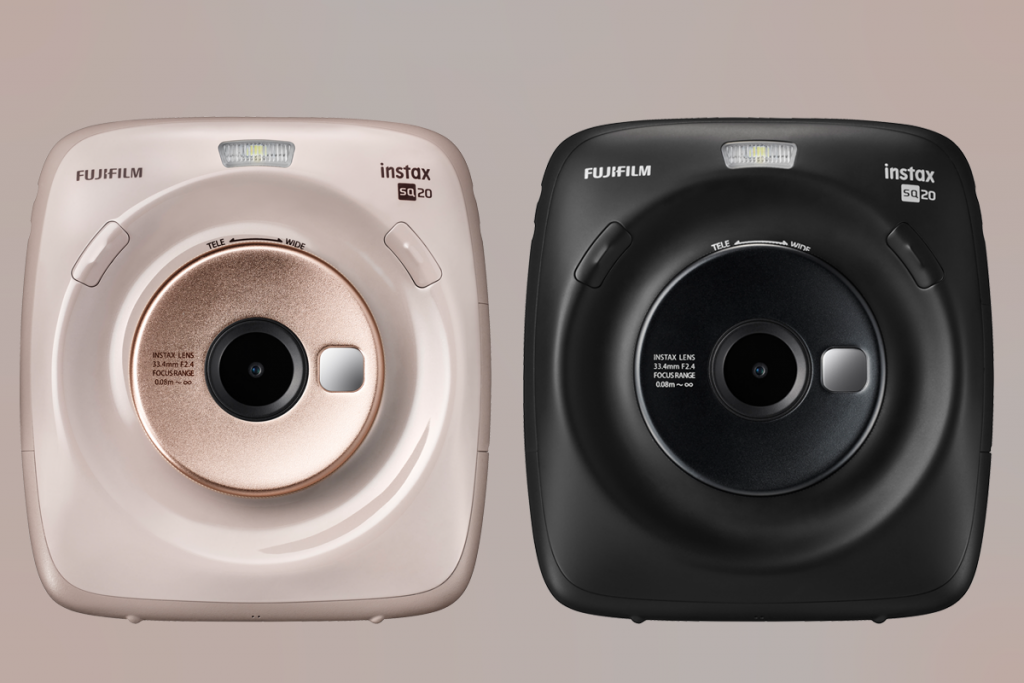 At the other end of the affordability scale to the GFX 50R is the Fujifilm Instax SQ20 – an instant camera with a few digital tricks up its sleeve.

Chief among these is the ability to record 15 seconds of video, then pick your favourite frame to print out on its Instagram-style square paper. At £179.99, it looks like prime Christmas stocking fodder. Ricoh’s GRII was a minimalist APS-C compact with bit of a cult following , and now the company has finally given it a sequel in the form of the Ricoh GRIII.

The understated looks remain intact, but this time you get a new 24-megapixel sensor, hybrid autofocus and a fast, wide-angle f/2.8 lens. You even now get a (gasp) touchscreen. It’s shaping up to be another street photography classic – look out for a full review before its launch in early 2019. If Fujifilm’s 51.4-megapixel GFX 50R wasn’t enough Medium Format action for Photokina 2018, then Leica made sure we’ll all be lusting after a painfully expensive beast with the Leica S3.

Precise details about this 64-megapixel Medium Format snapper aren’t yet known, but it will come with an optical viewfinder and be able to shoot at 3fps. We’ll know more closer to its launch in Spring 2019. 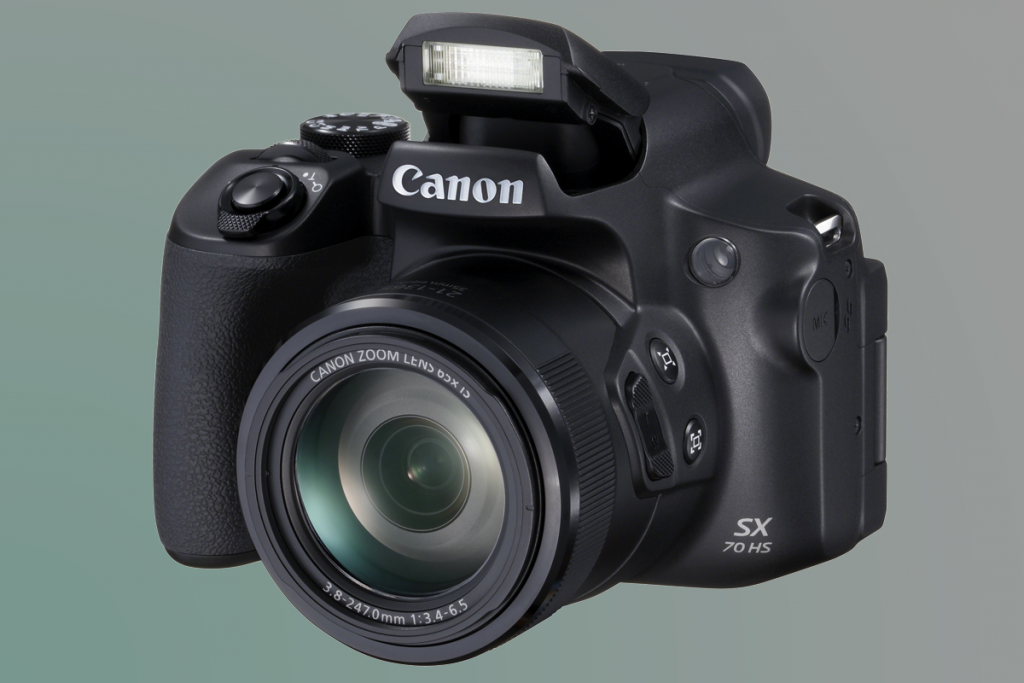 The poor bridge camera has been feeling a bit marginalised of late, shunted to the sidelines by full-frame flagships and stellar smartphone cameras. The Canon PowerShot SX70 HS is here to remind us, though, that flexible, fixed lens cameras with hefty zooms are still a great option for many of us.

Okay, it only has a relatively small 1/2.3-inch sensor, but this update to the PowerShot SX60 HS mixes 65x optical zoom, five-stop image stabilisation and, thanks to the inclusion of Canon’s latest Digic 8 processor, the ability to shoot 4K at 30fps. In other words, pretty handy all-rounder skills in a ‘mini DSLR’ body. You’ll be able to pick it up from November 2018 for £519.99. 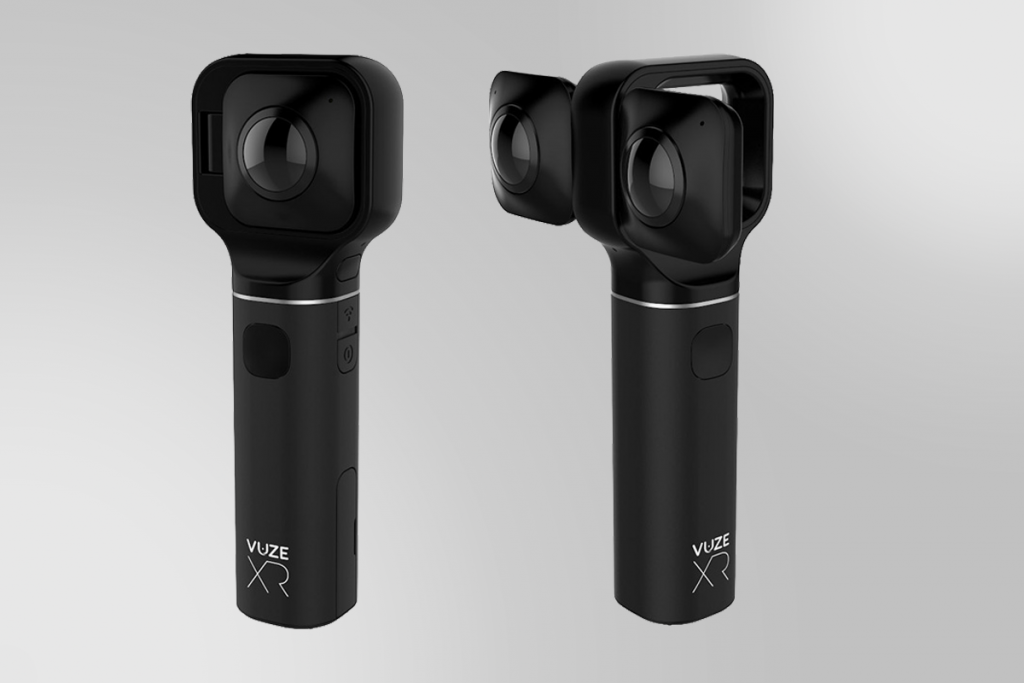 And now for something a little different – if you fancy live-streaming your life in 180-degree or 360-degree VR to Facebook or Youtube, then Israeli company HumanEyes might have the camera for you.

The Vuze XR shoots VR-friendly 5.7K video at 30fps or 4K video at 60fps. If you shoot in the latter resolution, this is then stitched together in real-time for live-streaming or flinging to social media (assuming your favourite platform supports VR video).

In its default mode, the Vuze XR’s two cameras shoot 360-degree video, but press a button and they flip out to shoot 180-degree videos favoured by the likes of Google’s VR180 app (which HumanEyes is working on being certified for). It’ll also come with a waterproof case for next-gen Jaws recreations.

Okay, it’s probably not one for DSLR-wielding traditionalists, but at £399 the Vuze XR is shaping up to be a fine way to dabble in creating your own VR videos. 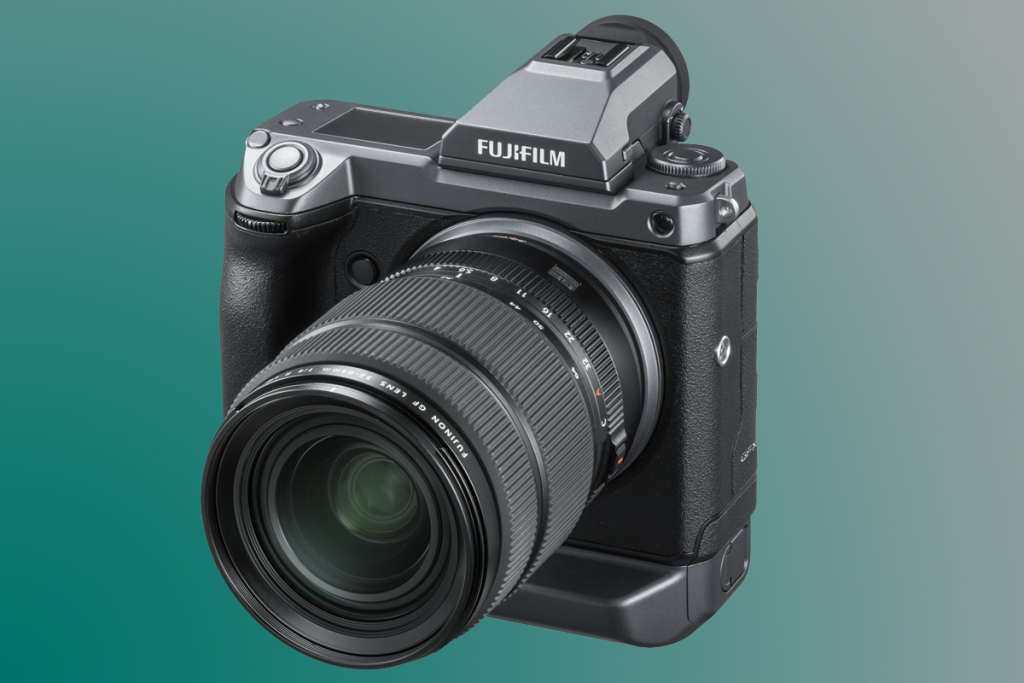 Unfortunately, this 102-megapixel beast will also cost more than a brand new hatchback when it goes on sale in the “early half of 2019”, with a price tag of $10,000. Photographic beginners best look elsewhere, then, but professional studio and landscape shooters might soon be looking at their re-mortaging options. The AZ1000 packs a 20.68-megapixel sensor and can manage 7fps burst shooting, thanks to its relatively small (at least by the standards in this list) 1/2.3-inch sensor. There’s no word on pricing or release date yet but we’ll update this page when we find out.

That’s all for now, but stay tuned, as we’re live at Photokina 2018 and will be updating this page with all the latest news and camera launches as the show progresses. Note that the above list is a work in progress and doesn’t necessarily represent our final selections for Best of Photokina 2018.

What have you seen at Photokina that tickles your fancy? Let us know @TrustedReviews.