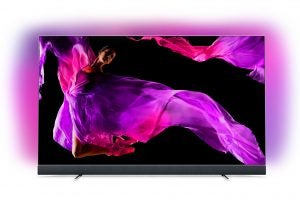 Philips has announced a new flagship OLED TV at IFA 2018, and it comes with some help from Bowers & Wilkins.

Philips’ OLED TVs have consistently been critical and commercial hits, so it’s hardly a shock to find the company building on its success. The 65-inch Philips 65OLED903 starts to live up to it’s flagship status with its design. This combines an ultra-thin frame with a gleaming metallic finish and a pair of feet so narrow they’re almost invisible when viewed from the front.

This being a Philips-branded TV, there’s also Ambilight. In the 65OLED903’s case, this will find Philips’ trademark coloured light being thrown from the TV’s top, left and right edges by rear-mounted LEDs.

Despite featuring a predominantly super-thin rear like most OLED screens, the 65OLED903 also promises to sound better than most TVs thanks to a sound bar attached to its bottom edge. This is no ordinary built in sound bar, either. It’s the first fruits of Philips’ new partnership with British hi-fi brand Bowers & Wilkins, which introduced a number of design and tuning improvements. 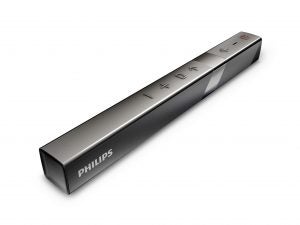 For instance, when it comes to high and medium frequency playback, each drive unit is now placed in its own baffle within a pressed seal chassis, with internal ribbing to resist distortions and cabinet rattles. Distortions are also diffused by the use of glass fibre cones, and B&W adjusted Philips’ original driver proportions to improve off-axis performance.

A new driver motor was introduced to enhance dynamic range too, while a flush-mounted 19mm titanium-dome concentric tweeter is claimed to deliver fuller and better dispersed trebles. When it comes to bass, B&W enlarged the main low-frequency unit and gave it a more linear design. The cones were made stiffer too, and the housing was strengthened with internal ribbing. Finally, auxiliary bass radiators were introduced, derived from those used in B&W’s critically acclaimed T7 portable wireless speaker. 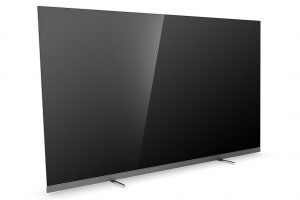 It also looks like there will be a strong set of picture features. The panel is taken from 2018’s OLED production lines, so it should deliver key brightness, screen reflection and black level improvements over their 2017 predecessors. Philips hopes to stand out from the OLED crowd with its P5 processor. This chip takes its name from the way it works on Philips’ ‘five pillars’ of picture quality: contrast, colour, source detection, motion and sharpness. It combines all these into a series of 26 different processing steps.

The Philips 903 will use Android TV smart operating system. High dynamic range formats support include the HDR10, HLG and HDR10+, but not Dolby Vision.

Most of these specs are in line with the Philips OLED803 announced earlier this year. The key differentiators are design and sound quality. The Philips 65OLED903 will cost £3499. Look out for our first impressions shortly, followed by a full review in the coming weeks.