The 4K revolution is underway, and Panasonic is one firm that’s not shying away from rising resolutions.

Panasonic has announced that its 4K Blu-ray player has been certified as Ultra HD Premium.

Ultra HD Premium is a new standard that comes courtesy of the UHD Alliance, a consortium of Hollywood studios, TV manufacturers, broadcasters, and film producers.

Members of the UHD Alliance include The Walt Disney Studios, 20th Century Fox, Warner Bros. Entertainment, and Netflix, as well as tech giants like Samsung and LG.

It’s a logo that you’ll see stamped on TVs and Blu-Ray players with increasing frequency over the next few years. 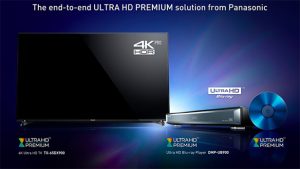 Related: Ultra HD Blu-ray – what you need to know

“The UB900 features a new 4K High-Precision Chroma Processor equipped with imaging technologies such as chroma processing and high-gradation processing that have been fostered and refined by the Panasonic Hollywood Laboratory Blu-ray R&D facility,” explains Panasonic.

It continues: “By taking full advantage of the massive amount of Ultra HD Blu-ray data, the UB900 reproduces video images on a home TV that look exactly as their creators intended them to look.”

The new UB900 Blu-ray player goes on sale in the UK this week. Customers who purchase the player will also get free copies of Mad Max: Fury Road and San Andreas.

Do you own a 4K TV yet? Let us know why (or why not) in the comments below.