From soundbars to smart speakers, microsystems to DAB radios, Panasonic has ticked most boxes with its 2018 range of audio products.

Panasonic’s European Convention in Palma had a lot of audio treats for casual listeners and audiophiles alike. What follows is all the details for what’s coming this year, so you know what to expect.

As well as new ranges and product line ups, there are a few things that continue from 2017 as well. I’ll include all the significant models from those ranges here too, so you know what to look out for on your next trip to the shops.

A large chunk of what follows will also be making its way to the Trusted Reviews testing benches over the next few months, and we’ll be sure to link those reviews below as and when we get our hands on them. 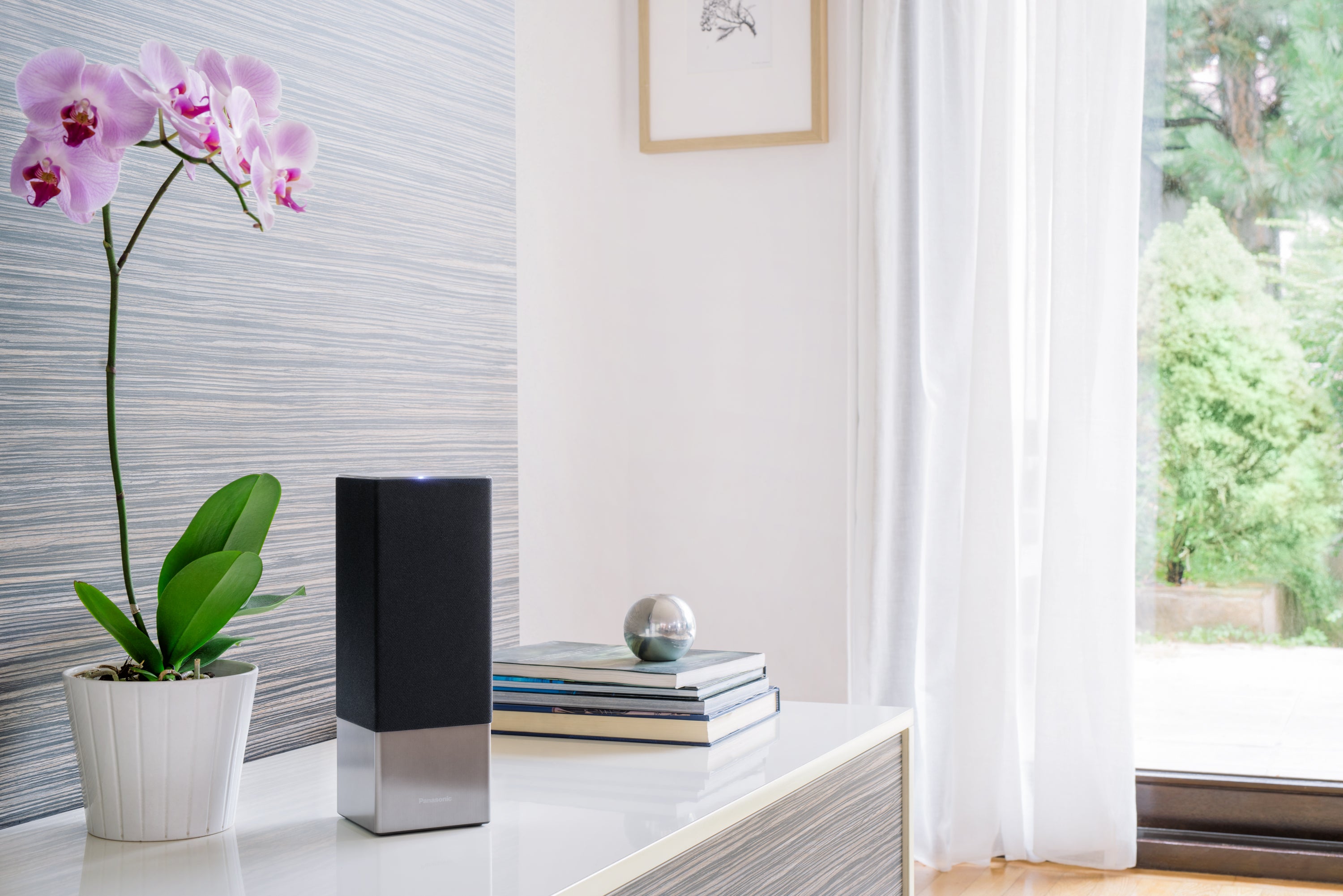 We first heard about the Panasonic SC-GA10 at IFA 2017, but considering the emphasis Panasonic is putting on how good this little speaker sounds, it feels only right to include it here.

It has Chromecast built in, and also natively supports streaming from Spotify, Google Play Music, Deezer and the Beeb. However, with Bluetooth on board, you’ll be able to stream from others using your phone, plus there’s wi-fi for NAS drive streaming and a 3.5mm hardwire connection. 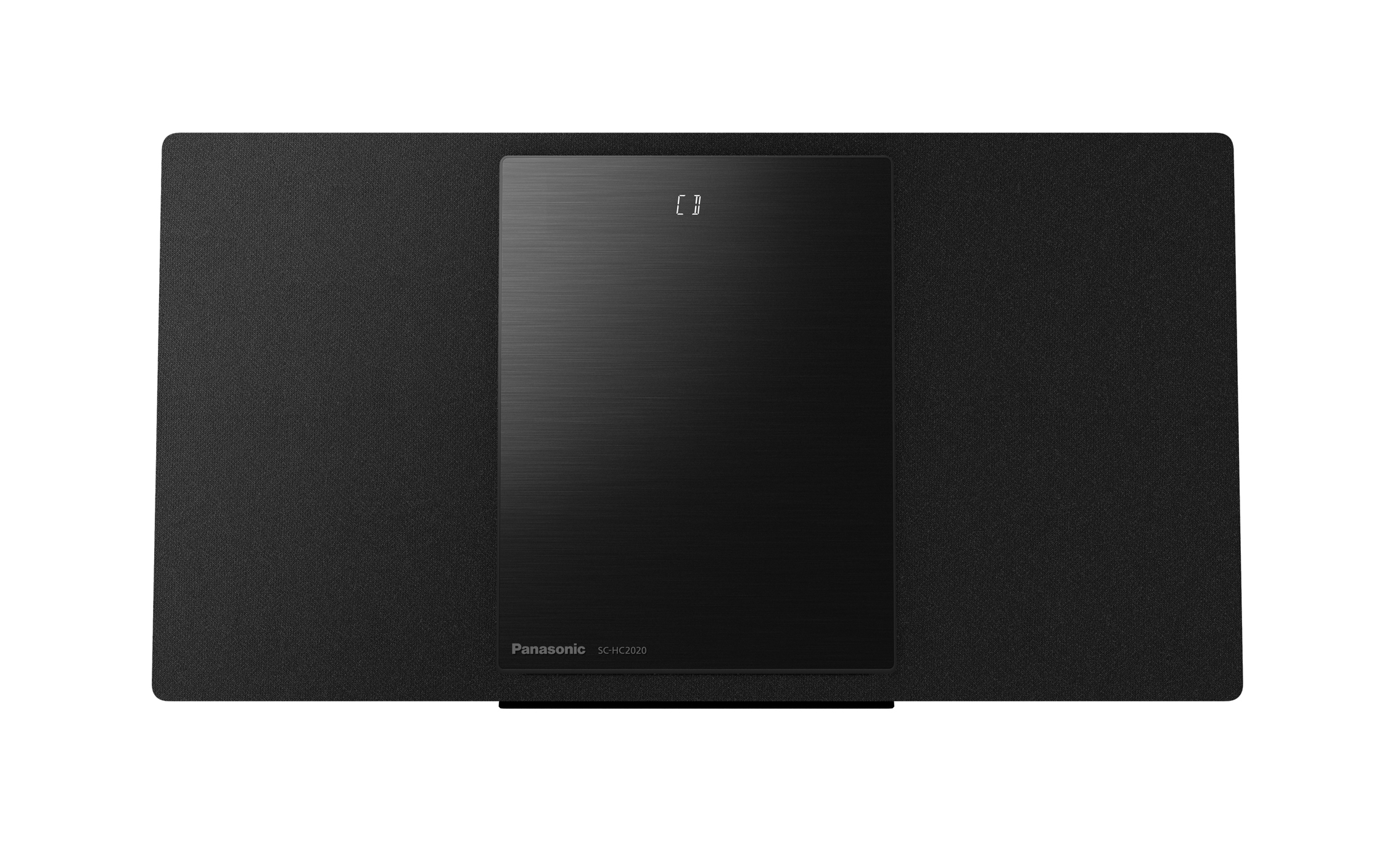 These stylish miniature audio systems are doing good things for Panasonic across Europe, so this year the company has extended the line-up with a new flagship speaker (the HC2020) and added new features further down the line.

The HC2020’s big headline feature is that it comes with Chromecast built in, and is the only speaker in the range to do so. This means not only is streaming from your phone nice and easy, but it can also be voice controlled by a speaker with Google Assistant built-in (like the SC-GA10). It can even be linked with other speakers in your house using Chromecast’s multi-room sync.

The flagship model will play music via CD, USB, DAB radio, Bluetooth or wi-fi, and also includes support for high-resolution music too. The other models are a little more restricted – the HC402 loses wi-fi playback but matches the 40w sound output, while the HC302 and HC200 lose DAB radio, and drop to 20w sound output. The HC302 does keep an aux in and NFC functionality to set it apart from its entry level sibling, though.

Overall it’s the range’s slim, space-saving design that makes them particularly popular with buyers, especially as they can be wall mounted if you prefer, with the exception of the HC200. 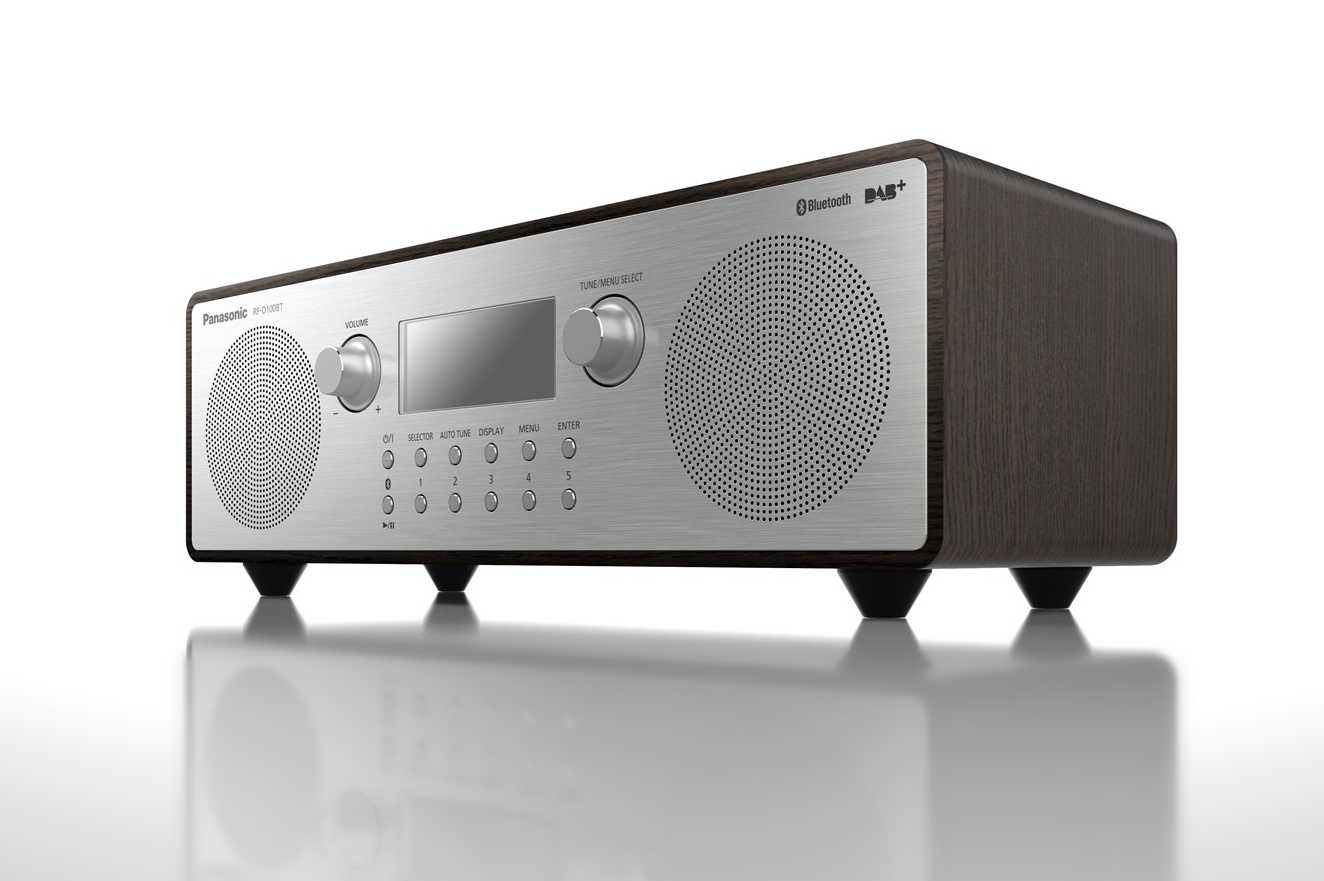 The RF-D100BT has a retro design of wood and aluminium

A new premium radio joins Panasonic’s DAB line-up this year, and it comes in a retro-cool finish of wood and aluminium. It uses 2.5in drivers mounted into the wooden enclosure to ensure a solid bass performance, and packs Bluetooth and an aux input alongside its DAB/FM radio skills.

Twin rotating knobs deal with volume and tuning, while a dot matrix display lets you know what station you’re on and what’s playing.

Unlike the flashy flagship, last year’s models are rather more functional looking, with the D20 boasting Bluetooth and a splashproof design over the D10. Both are portable though, thanks to built-in batteries.

Related: Best DAB Radios 2018: Which digital radio should you buy? 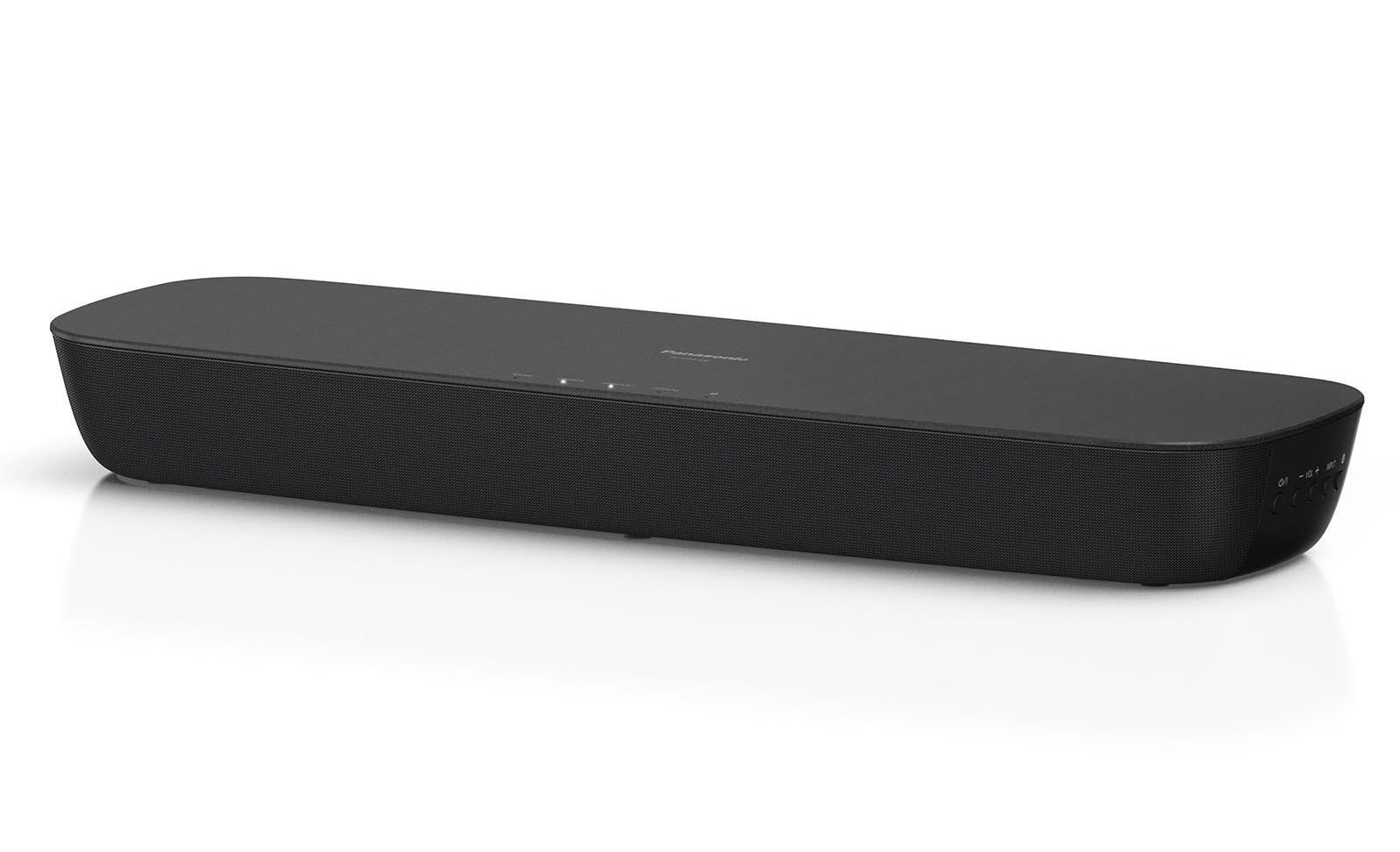 The Panasonic SC-HTB200 is compact enough to slip under most TVs.

There are two new kids on the block to talk about when it comes to Panasonic’s 2018 soundbars. The SC-HTB200 is the entry level model, offering a total of 80W of sound from a 2.1ch system.

It’s a compact soundbar, designed to slide between the feet on a Panasonic TV, but its size means it’s easy to tuck itself away relatively unnoticed, whatever your telly brand.

The SC-HTB258 looks almost identical by design, but it is joined by a subwoofer included in the box, to give your movies more oomph from the get go. That boosts sound output to 120w, and as such, means the HTB258 will better suit bigger rooms, or those after more low-end punch.

Several of last year’s models roll over to this year too, and include 2, 2.1 and 3.1ch options in more traditional long and slim designs. 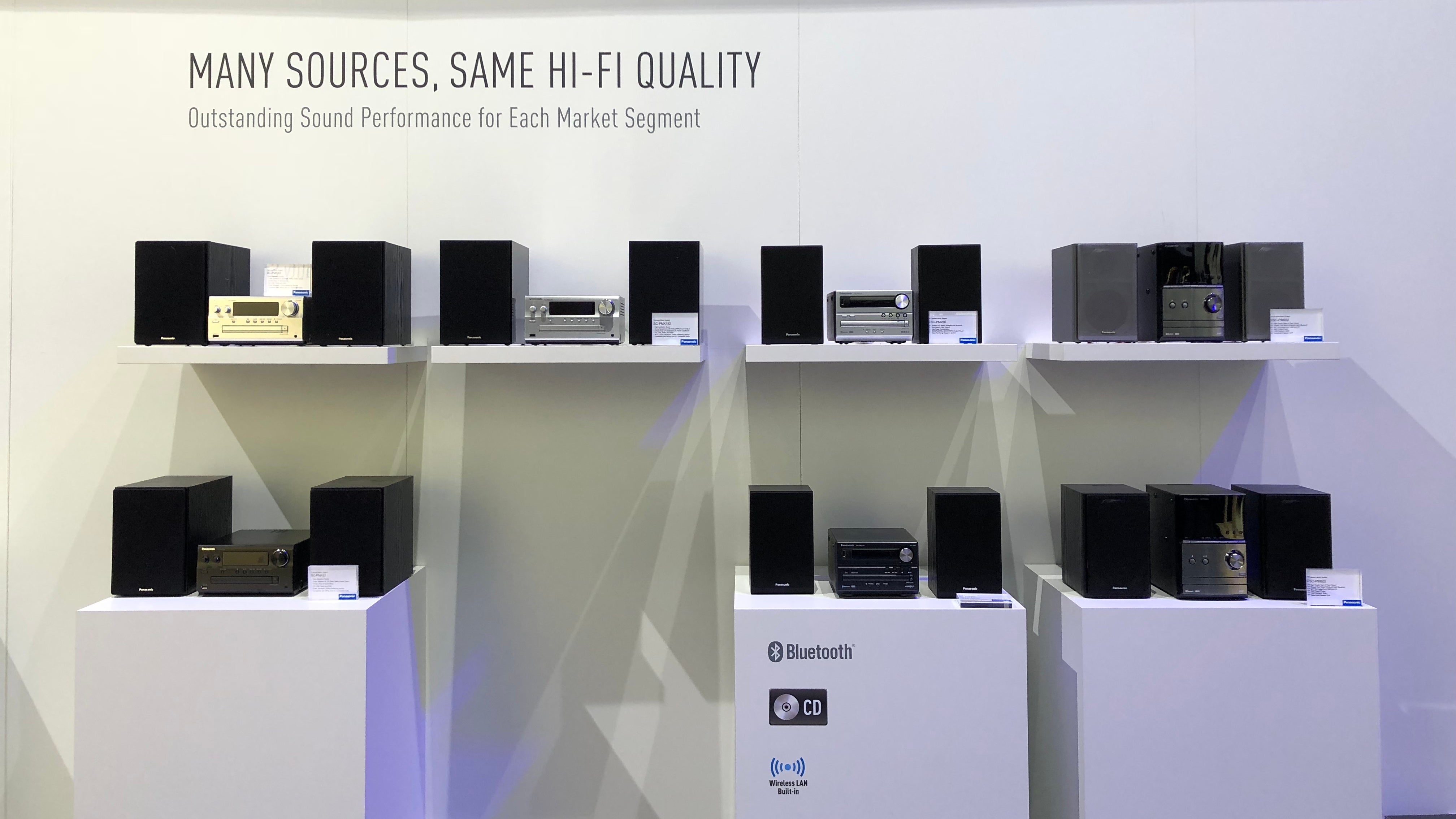 If it ain’t broke… Panasonic has certainly listened to the old adage when it comes to its compact hi-fi systems, and its whole 2017 range gets continued in 2018 with no changes.

The flagship model is the SC-PMX152, which offers 120W of sound output, three-way speakers and the very best sound tech of the range.

It’s the latter that gives it the edge over its sibling, the SC-PMX82 – though both support high-res 24-bit/192kHz playback and extensive playback, including CD, DAB radio, Bluetooth, AirPlay, DLNA and USB.

The remaining two models in the foursome are a little more straightforward – the PM602 offers 40W of sound and two-way bass reflex speakers, with CD, Bluetooth FM radio and USB playback, while the PM250 is the entry-level option at 20W sound output. You’ll get DAB on the PM250 though, if that’s important to you.