Just bought a new stereo speaker system? Then you either have, or are about to, run into an age old problem: how to set it up to hit the perfect sweet spot in your intended listening environment.

This is has always been something of a problem with home audio, with the very nature of acoustics meaning you’ll have to factor where you’re sitting, the shape of the room and a multitude of other factors when setting up your audio system.

Even then, couch listening won’t be for everyone –  audiophiles like to walk and listen on occasion, or so I’m told. Which is why countless audio companies have claimed to have overcome this problem, or create “solutions”.

But to date, most have been for lower end systems or limited to mono speaker setups that lack a sense of stereo imaging, firmly making them unfit for audiophile-level listening. This is why I took Orbitsound technical director Dan Fletcher’s claim, to have truly fixed the “sweet spot stereo problem” on the company’s new Air D1 speaker and Airsound tech, with a pinch of salt.

However, having had a chance to listen to the speaker at Orbitsound’s UK test lab and a hotel suite I am curious – here’s why. 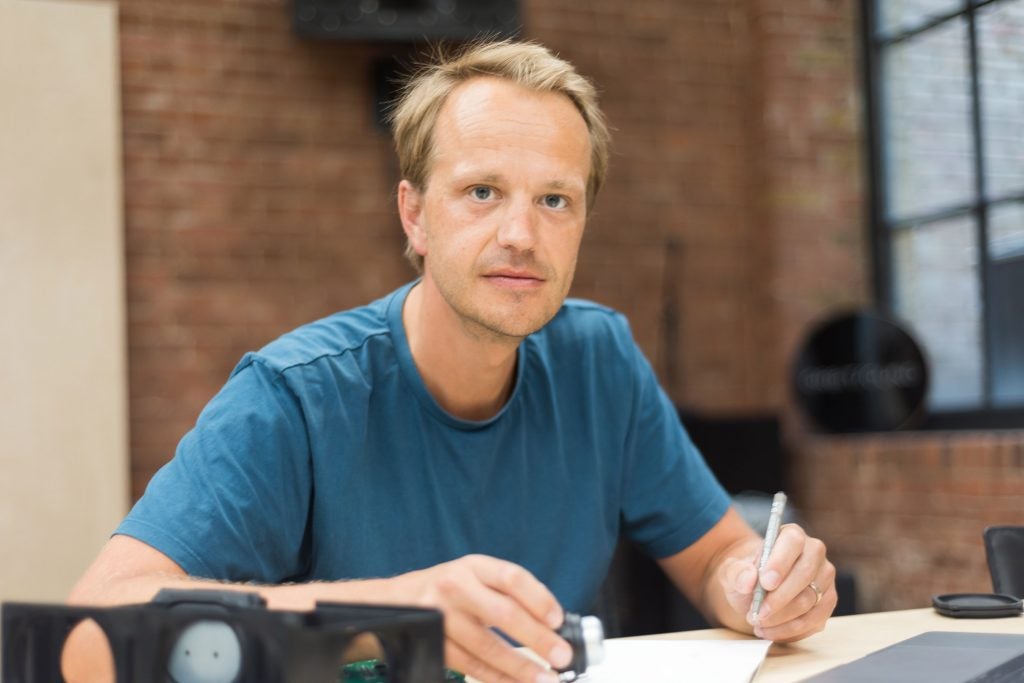 What is the sweet spot stereo problem?

If you’re not an audiophile, you may be confused about the problem Orbitsound is trying to fix. Don’t worry – you’re not alone.

The short answer is that the sweet spot is the ideal place for a person to stand/sit to get the best audio experience, whether listening to music or watching a film.

For a single speaker the positioning is pretty obvious: you want to be in front of it, but with stereo setups things get a little more complex and all sorts of issues can pop up, as Fletcher explained to Trusted Reviews.

“For most listening situations, having two speakers seriously colours the sound, and is not ideal. This is accepted fact, and is easily explained in physics, because the wavelength of sound changes with frequency, causing different constructive and destructive interference effects. Only a perfect, sweet spot driven experience is a good way to hear an authentic reproduction from two speakers.”

He continued: “The ‘sweet spot stereo problem’ is so embedded in the fabric of studio thinking, it wasn’t something we set out to challenge. The motivation, as with anything I have ever done in audio, is simply to make a better sound.” 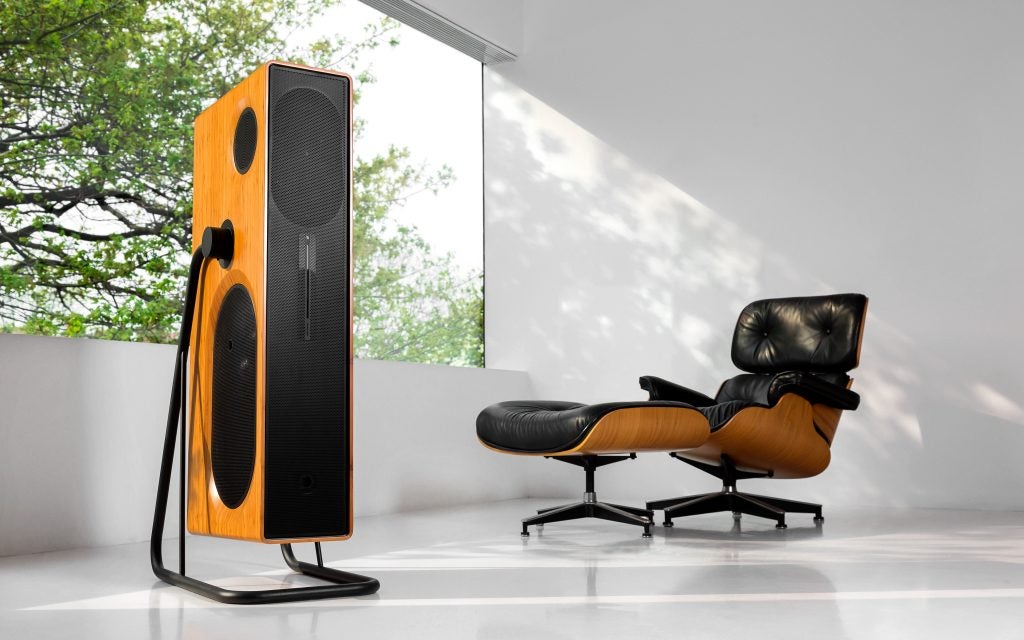 Fletcher said that the idea behind Airsound, and solving the issue, stemmed from a basic experiment – to create a playback system for a recording Fletcher had made using a Blumlein pair of microphones – this is where one mic captures the whole sound while the other captures the stereo information.

“I was aware that converting this type of recording into left and right channels was somewhat imprecise, and I wondered if instead I could build loudspeakers in a front/side arrangement to play back the signal as it was captured, and what it would sound like,” explained Fletcher.

“I remember the first moment of switching it on, and expectantly standing directly in front of the centrally positioned stack of speakers. The effect was superb, because the speakers were built to exactly reproduce the sound and pattern of the recording microphones. It was only after some time I realised that the sound did not change when not in the sweet spot. Magic.”

It was from this point that Fletcher had the idea to create a single audiophile level speaker.

“The system worked so well, with such a convincing stereo image, that we had to take it further. The challenge was to develop the electronics so that such a system could play any material,” he said.

The tech comes with some challenges, and uses a load of proprietary parts and processing Orbitsound doesn’t want to disclose, making the exact details of how it works a little murky. Fletcher did reveal some details about how Airsound works to Trusted Reviews though.

“Firstly the sound is processed and converted into a mid-side signal. The two channels of left and right audio in a normal recording are converted into mid (mono sound), and side (stereo information) channels. How this is exactly done is not disclosed, except for the basics which are patented, but the important thing is that no sound is artificially created or removed,” he explained.

“This process produces a front/side signal that contains all the information in the original left/right signal. This two channel signal is fed into a front/side speaker array, and the job of converting this sound into left and right for listening is done in the air, and by your ears – hence the name, Airsound.” 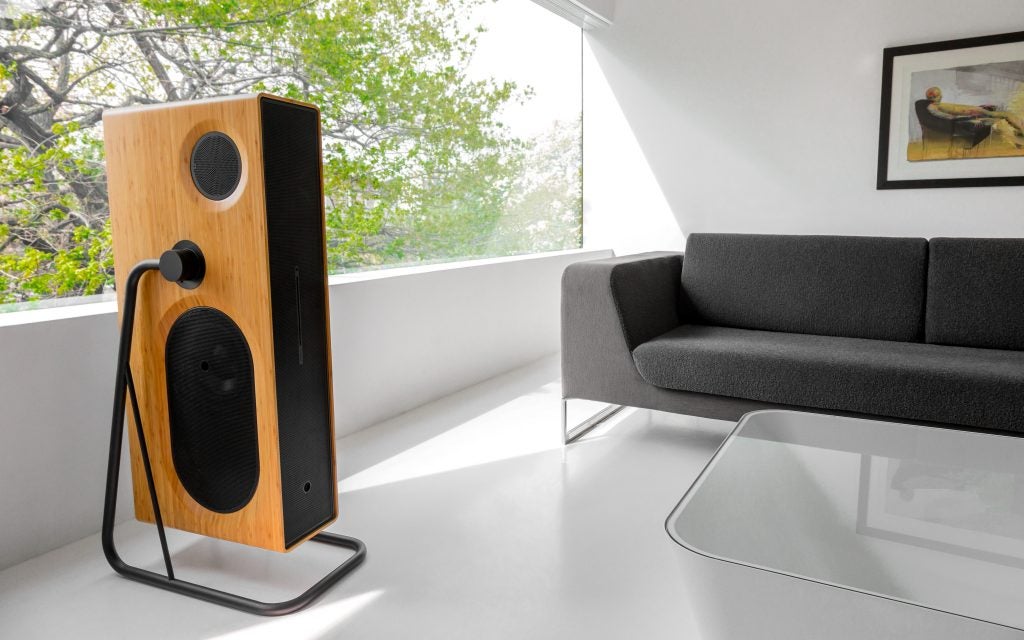 Does Airsound work and how much will it cost?

Verifying how well it works is a little tricky as I’ve only had two brief chances to have a listen to the D1. The first at Orbitsound’s offices and the second at a press event in a suite at Soho hotel.

After listening to a few test tracks, it’s too early to offer a definitive verdict, but the early signs were positive. Walking around the speaker, the stereo image and overall audio quality didn’t drop off anywhere near as much as I expected and from what I heard, if the source was stereo, it worked as pitched.

Sadly, getting the chance to test it for yourself will be costly – the Air D1 will set you back a massive £12,000.

The good news is that the Airsound tech could in theory be scaled down to smaller, more affordable speaker systems.

“Airsound does not change with almost any size. It works the same for the Air D1 as our soundbars. There are theoretical limits to Airsound, but these would only come into play in much larger systems,” Fletcher told Trusted Reviews.

I’d be seriously curious to see how the tech works on home systems, like soundbars, which traditionally are used in shared listening environments. But even on the audiophile level Air D1 it’s an interesting concept and one I’d suggest serious music fans check out, if they get the opportunity.