The Apple iPad 7th-gen just looks too good. And by that I mean too good for Apple’s own good. Hear me out, won’t you?

The new entry-level model – surprisingly announced during Apple’s September 10 event – crams in so many Pro-level features it’s left me wondering why anyone would fork out more than double the amount for an iPad Pro.

The new iPad is £349. The iPad Pro starts at £769. And I’m far from convinced the Pro model is anywhere near twice as good as the affordable contender. Let’s look at the evidence, shall we?

The 2018 iPad 6 model, earned a rare 5-star score from Trusted Reviews. On paper, this model improves upon its predecessor so significantly it’s difficult to imagine that score dropping below perfection.

The successor continues support for the previously Pro-exclusive Apple Pencil (1st-gen) but I’m really surprised to see Apple lower the entry level for the smart connector that brings the full-size Smart Keyboard into play – another Pro-level feature designed to give iPad owners a Mac-like experience.

Of course, the 2nd-gen Apple Pencil for iPad Pro is much improved and offers wireless charging through magnetic attachment, but feature parity with the Smart Keyboard is a massive leap into Pro territory.

If that was a surprise, colour me fully shocked that the new 7th-gen iPad enables owners to connect a USB thumb-drive or SD card to interface with the Files app. When Apple announced the iPadOS this summer, support for the external memory devices was advertised as an iPad Pro-exclusive feature. I wonder how those who sprung almost £800 for an iPad Pro feel about this now?

The disparity between the displays on the entry-level and Pro models has also narrowed. The 2019 iPad offers a larger 10.2-inch Retina display that builds upon the 9.7-inch display, while moving closer in size to the 11-inch iPad Pro model. The pixel density is the same 264ppi with the respective resolutions differing only due to the display size.

Let’s not kid ourselves though, the iPad Pro’s display quality is superior. It offers 600 nits vs 500 nits of brightness, brings the paper-like advantages of the liquid retina display and the beautiful ergonomic design that brings Pro users a near edge-to-edge display. But is it worth anywhere close to an extra £400? 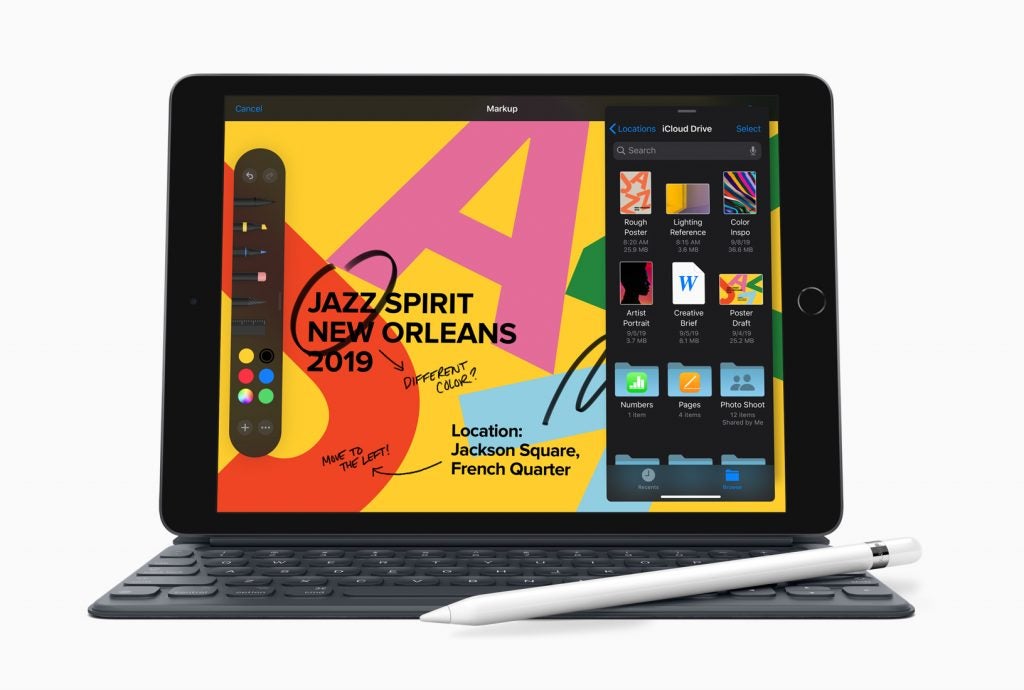 Likewise, the A10 Fusion Processor within the new iPad isn’t likely to match the A12X Fusion within the newest iPad Pro, but with Apple promising the new iPad “brings up to two times faster performance over the top-selling Windows PC” it’s unlikely to phase those who aren’t in need of the bleeding-edge speeds.

The new iPad is even superior to the iPad Pro in terms of sustainability, in some ways, offering a 100% recycled aluminium enclosure. The best the Pro model can offer is “aluminium that was smelted using 100 percent hydroelectricity rather than fossil fuels for the enclosure, where the majority of the aluminium is located.” Score one for the new entry-level iPad, if the illusion of environmental friendliness is part of the tech-buying decision making process.

We’re certainly not calling full parity here. The iPad Pro offers the best of the best of Apple’s tablet technology and the new iPad 7th-gen does not match it. However, back in 2018, we said the 9.7-inch iPad was “an iPad Pro on a budget,” and that comparison is even more apparent this year. Especially for those users who actively prefer Touch ID and a Home button over Face ID! 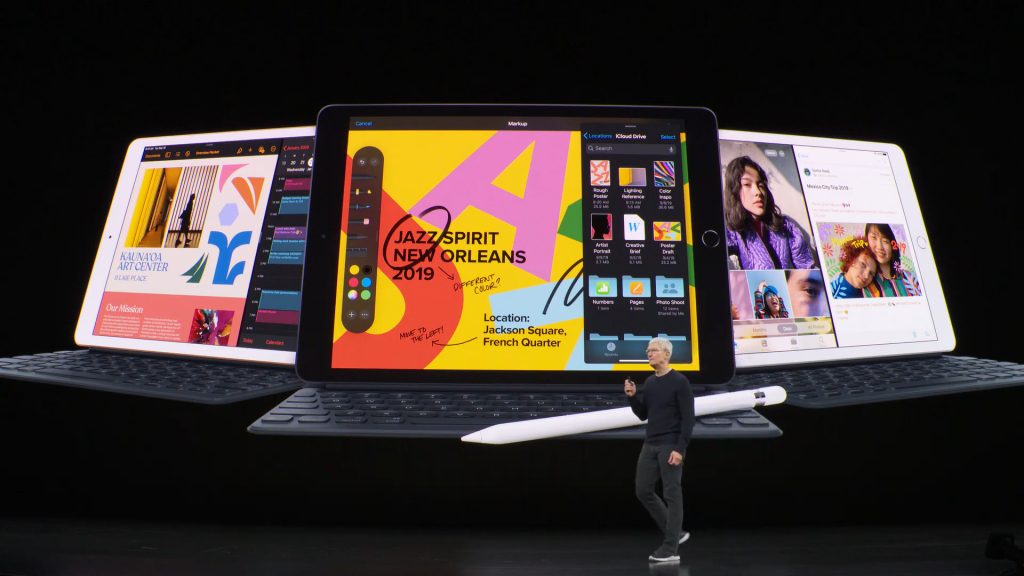 What is Apple thinking?

Apple isn’t stupid. It’s folly to think they’re totally undermining the iPad Pro here. It has clearly identified there are two distinct sets of customers buying its products: those who want the ease and prestige of the Apple experience; and those who’re willing to pay absolute top dollar for the company’s bleeding-edge design and technology, even if there’s less disparity between the features and functionality on offer.

With that in mind, it’s no coincidence Apple just added the Pro moniker to the iPhone line for the first time and is charging a full £320 more for the iPhone 11 Pro than the iPhone 11. Those who want the absolute best Apple has to offer will still buy the iPhone 11 Pro Max, just like they have with previous generations.

Likewise, Apple just launched an Apple Watch Series 5 that offers an always on display and various other subtle improvements. That model starts at £399, but the Apple Watch Series 3 (which also has GPS, an optical heart-rate sensor, similar battery life and water resistance) is now £199. You’ve got to really want those new features to spring for the Series 5, right?

Regardless of whether they upgrade every year, getting just one of these affordable models into people’s hands means Apple can sell more subscriptions to Apple Music, Apple Arcade, Apple News Plus and Apple TV Plus, along with never-ending App Store revenue. That’s the long-game here. Let them eat cake!

Still, if I’m one of the many Apple fans straddling that middle ground between iPad and iPad Pro; there’s only one real choice…