Both the TX-RZ840 and TX-RZ740 receivers boast an extensive feature set, with object surround sound options in Dolby Atmos and DTS:X up to 7.2.4 channels. Dolby Surround and DTS Neural:X upmixing technology is available for legacy soundtracks, while Dolby Atmos Height Virtualizer (available in a future update) can create a virtual height and surround mix for non-Atmos Dolby tracks.

They are the first Onkyo receivers to support IMAX Enhanced, a certification program which uses DTS:X decoding to reproduce the full dynamic range of IMAX sound mixes in digitally re-mastered IMAX Enhanced content.

The IMAX Mode is said to reproduce content as the filmmakers intended, bringing the IMAX Enhanced versions of films, from Hollywood blockbusters to documentaries, to 4K HDR streaming and Ultra HD Blu-ray. Rakuten TV is a streaming partner of IMAX Enhanced in the UK.

The TX-RZ740 and TX-RZ840 receivers are also THX Certified Select after completing 2,000 bench-tests in 75 categories to satisfy the THX requirements for cinema-reference volume (in rooms where the viewing position is around 3.5m from the screen). 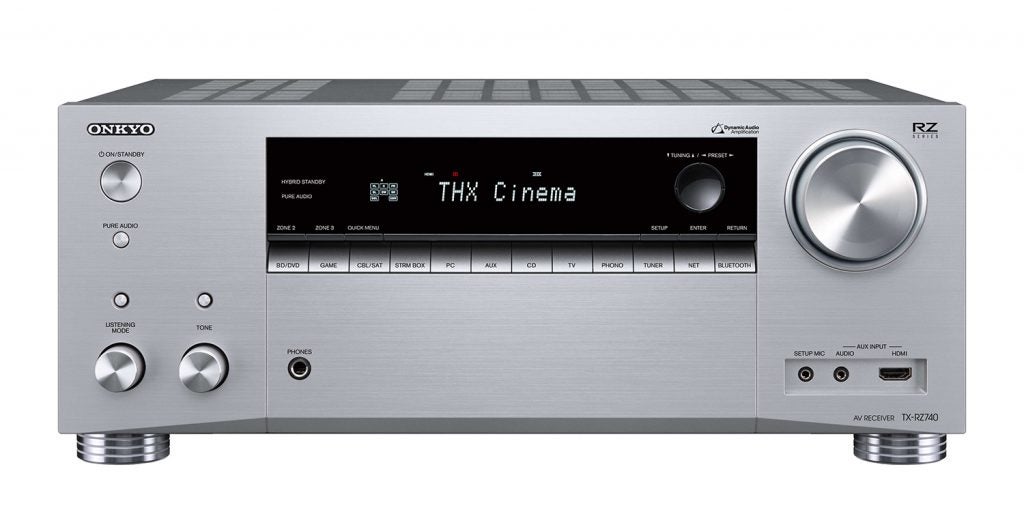 Multiroom is built-in and both can be used with a variety of systems that includes Sonos, (built-in) Chromecast, AirPlay 2, DTS Play-Fi, and FlareConnect (only with compatible products). Sonos usability extends to waking devices, changing inputs as well as the volume from the Sonos app. Chromecast functionality can also be used to connect to a Google Assistant speaker and control content through it via your voice.

You’re not left wanting for music streaming choices either, as users can listen to integrated Amazon Music, Spotify, TIDAL, Deezer, and TuneIn services on their home cinema systems or send the music to supported speakers.

For connections there are seven HDMI inputs (one front) on each unit, with all inputs supporting 4K/60p, HDR10, Dolby Vision HDR, HLG (Hybrid Log Gamma), WCG (Wide Colour Gamut) as specified by BT.2020, and HDCP 2.2.

The one difference between the two units is that the TX-RZ840 also supports eARC (Enhanced Audio Return Channel) for HD audio transmission from an eARC-compatible TV to the receiver.