We knew OnePlus was launching a brand-new concept phone we now finally know all the details including a look at its ‘disappearing’ cameras.

OnePlus has just fully shown off its Concept One and it certainly does come with a clever trick.

What is important to note is that this is not the OnePlus 8, nor will you likely ever be able to buy this in its current states. It might show off some of the tricks OnePlus could bring to its consumer line though, whether that be this year or further down the line. 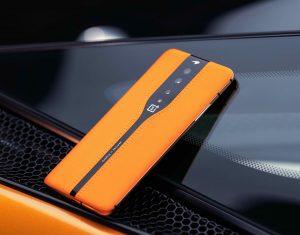 The biggest, and really only, headline feature here is the that the cameras on the back of the phone can turn ‘invisible. This is down to colour-shifting glass tech (electrochromic glass technology) that allows it to change transparency through a handy slider. Aside from making it look like the phone doesn’t have a camera at all on the back, it has some benefits to the picture shooting experience too as it adds a polarizing ND filter that should aid shooting in bright conditions by darkening the lens. Filters like this are commonplace accessories for cameras and it’s great to see them begin to trickle down to phones.

As it had done for some special editions of its phones before, OnePlus has teamed up with McLaren for the Concept One. The phone itself looks very much like the OnePlus 7T Pro McLaren edition, but with a vivid orange back covered in leather. It looks a bit like a sports car seat, if you will. 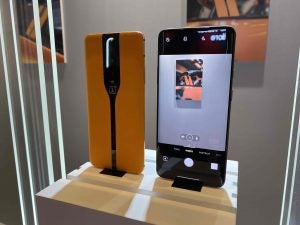 We had an early chance to play with the Concept One at a OnePlus event  and this new tech clearly does have some benefits. For instance, it could give OnePlus the option to fill the rear of the phone with camera lenses and for the whole phone to not look ridiculous as a result.

Specs aren’t really the point of this concept and as you won’t be able to run into a Carphone Warehouse and pick one up it seems irrelevant what’s inside. OnePlus is instead far keener to push the design aspects and what they’ve done certainly is eye-catching.