OnePlus 6T vs OnePlus 6: Is it worth the upgrade after only a few months?

OnePlus just unveiled the OnePlus 6T, updating its six month old OnePlus 6 flagship with a selection of new features. As is typical with OnePlus, this mid-cycle upgrade isn’t a huge step-forward, instead focusing on tweaking what was already there.

But should you be considering upgrading if you’ve only recently upgraded to the OnePlus 6? Let’s have a look and see.

OnePlus 6T vs OnePlus 6 – There’s a smaller notch, and a bigger display

There’s two big headline features packed into the OnePlus 6T: an in-display fingerprint reader that replaces the traditional sensor on the back and a smaller, less intrusive notch. Let’s talk about the latter first.

OnePlus introduced a notch – the name given to that cutout in the display that’s required to house sensors and a camera on thin bezel – with the OnePlus 6 and with the 6T it’s making it noticeably smaller.

Like the Huawei Mate 20, the OnePlus 6T has a ‘dewdrop’ or ’teardrop’ notch. Basically instead of taking up lots of space, like on an iPhone XS, the notch here is a tiny droplet covering the camera

It’s not going to be a reason for upgrade, but we must say it looks good. There’s less intrusion when you’re watching videos and it helps improve that edge-to-edge feel. 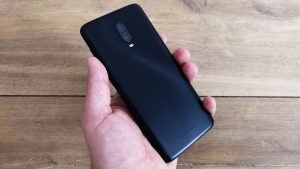 The switch means OnePlus has said farewell to the notification LED and moved the microphones/speaker onto the top of the device. In reality you’re losing very little.

The display is also slightly bigger (6.4-inches rather than 6.3) however everything else remains the same: OLED display tech, FHD+ resolution and a variety of screen modes to choose from.

The notch isn’t the only visual difference between the two phones. The OnePlus 6T won’t ship in white or red – just a glossy or a matte black – and the fingerprint sensor on the back is no-longer there. The headphone jack, has also been ditched to make room for a larger battery and  the in-display fingerprint sensor.

OnePlus 6T vs OnePlus 6 – Are in-display fingerprint sensors the future?

Under the OnePlus 6T’s display is a bunch of tech, including a camera, that’ll read your fingerprint and unlock the phone when you touch the glowing green symbol on the display.

Aside from being futuristic, the in-display fingerprint reader works well and functions pretty much just like a traditional sensor. It’s a tad slower though, and arguably not quite as reliable – but it’s better than some other implementations we’ve tried. 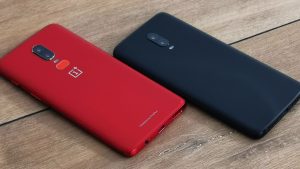 The OnePlus 6 has a more traditional fingerprint scanner that sits on its back, below the rear camera.

Both phones utilise similar face unlock methods and that means there’s no 3D face scanning or any fancy biometric tech here. Still, face unlock remains very quick even if it lacks the security of the in-display fingerprint sensor.

OnePlus has kept the spec-sheet pretty much the same for the OnePlus 6T when you compare it to the 6. Both pack a Snapdragon 845, 6/8GB RAM, USB-C Fast Charge and lack expandable storage. The base 64GB option has been ditched though, so 128GB is the new default.

The camera remains the same, too. One 16-megapixel f/1.7 and one 20-megapixel camera sit on the back (the second helps the portrait mode) and while these aren’t the finest shooters around, a couple of software updates have made them better over time. OnePlus has also added a dedicated low-light mode.

This means things like Qi charging (a feature found in more and more high-end Android phones) and an official IP-rating are still nowhere to be found. Maybe we’ll those additions, along with 5G, for the OnePlus 7 when that likely debuts sometime in 2019.

You do, however, get a larger 3700 mAh battery which is up from the 6’s 3300 mAh. It’s a nice bump that gives the phone some extra endurance.

Both phones use Android 9 Pie, with a smattering of OnePlus tweaks. There’s a bit more customisability with user-selected icons and a ‘Shelf’ for storing apps, shortcuts and widgets.

OnePlus 6T vs OnePlus 6 – Is it more expensive and should you upgrade?

The price increase over the OnePlus 6 isn’t huge. That phone retailed for £469 when it launched (however you’d only get 6GB RAM/64GB there) with a £519 version offer 8GB RAM and 128GB storage.

If you’ve recently picked up the OnePlus 6 we wouldn’t suggest upgrading right away, especially if you’re happy with it. The in-display is nice and the notch certainly is less intrusive, but those features aside there isn’t much new. There’s also some bits, the headphone jack for example, that you’ll lose in the upgrade. This phone is more for those on older OnePlus phones and Android devices in general.

Will you be upgrading your OnePlus 6 to the OnePlus 6T? Let us know @trustedreviews