OnePlus 6T vs iPhone XR: Kill or be killed?

With Apple’s ‘affordable’ 2018 iPhone arriving just days ahead of OnePlus’ newest player, the OnePlus 6T, there’s every chance that you might be split over which smartphone could be your next.

If so, beyond the obvious dichotomy of iOS and Android, the biggest difference between the two is price. The iPhone XR  costs significantly more than the OnePlus 6T, despite being the affordable option in Apple’s 2018 line-up.

There’s always been a question over whether OnePlus can (or could ever) legitimately be called an ‘iPhone killer’ given the difference in price, but this year the gap between the XR and 6T is undoubtedly the narrowest we’ve ever seen. Read on to find out why.

There’s no question that OnePlus has incrementally improved the build quality of its phones every year. The 6T has its predecessor, the OnePlus 6, to thank for its good looks as a result. You get the same glass-backed design with the company’s now signature horizon line running against the phone’s edge, as well as the trademark physical alert switch to toggle between ring, vibrate and silent profiles.

The new in-display fingerprint sensor isn’t just a standout hardware addition for the 6T, it also gives that glass back an even cleaner appearance, so you can enjoy the ‘S’ shaped reflective pattern of the Midnight Black finish (or the shiny finish of the Mirror Black colourway) that little bit more. 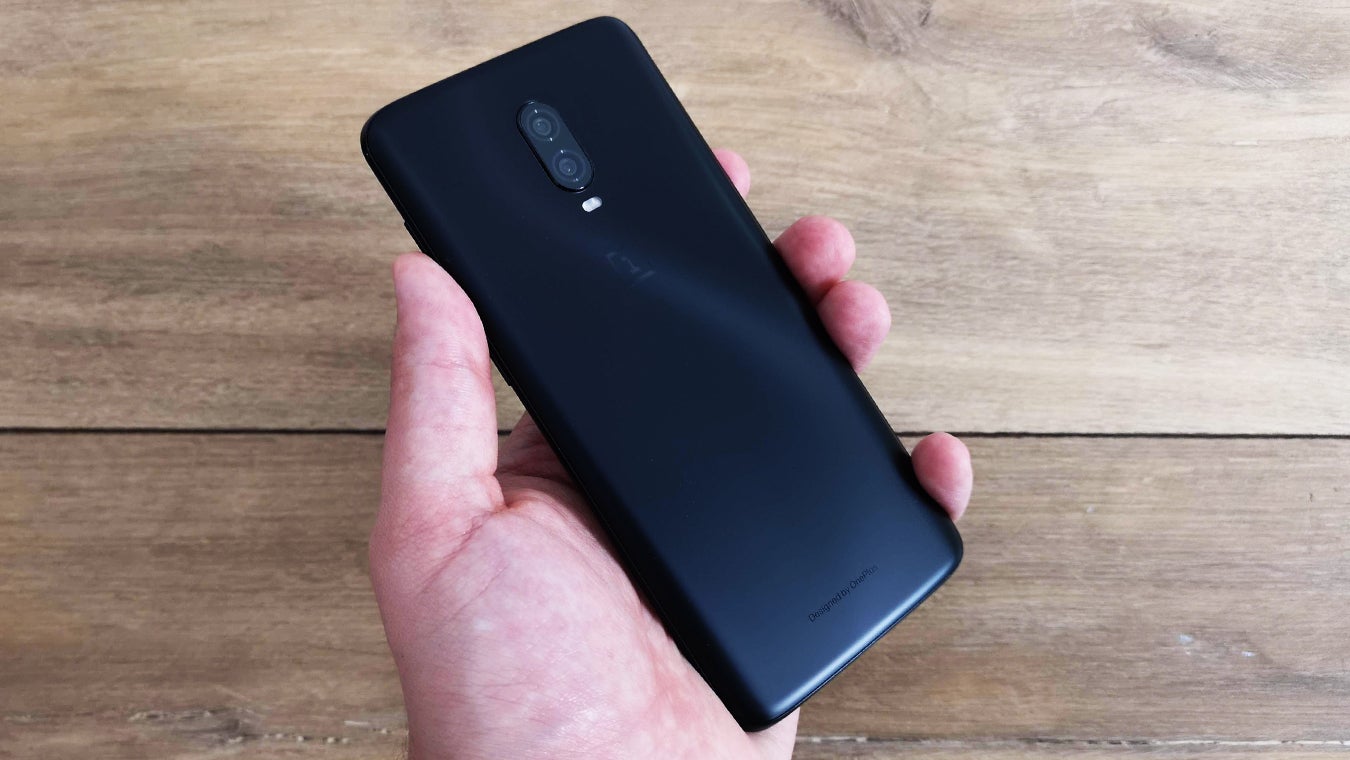 Midnight Black is the way to go

Aesthetically, the XR feels a little clunkier by comparison. Despite a smaller display, it’s a bigger, heavier phone overall, with thicker bezels to boot. This makes using it one-handed a little bit harder than it is with the OnePlus and means the 6T is better equipped for gamers and media lovers from a visual standpoint.

Whichever way you swing, both phones feature a notch. In the case of the XR, it’s broad, dominating the top edge of the phone’s screen. In doing so, however, it includes all the necessary gubbins to grant the phone its secure Face ID unlocking abilities, as well as the excellent face tracking found within Animoji and Memoji.

The 6T also features a notch but the ‘dewdrop’ design (to steal the Huawei Mate 20‘s vernacular) is only present to house the front-facing 16-megapixel snapper. It doesn’t have the face unlock security of the iPhone XR as a result. That said, it also doesn’t encroach on the near bezel-free screen anywhere near as much as the XR’s notch does.

From a functional standpoint, the XR trounces the 6T thanks to IP-certified dust and water resistance, as well as support for wireless charging thanks to its glass back. Cosmetically, although the phone might not offer the same slick stylings as the OnePlus, its availability in six different colours is sure to entice those less concerned with the nitty-gritty of technical performance.

It’s also worth noting that neither phone has a headphone jack. This won’t come as news to long-time iPhone fans but for OnePlus this is a new and, honestly, disappointing move. Unlike Apple, the company does at least still include a USB-C jack adapter in-box.

Apple’s A-series chips have always been potent pieces of silicon, keeping leading rival Qualcomm on its toes. In this battle, it looks like Apple’s A12 Bionic processor – the same one that powers the iPhone XS and XS Max – might have the Snapdragon 845 chipset inside the 6T beat.

There’s an abundance of RAM on offer from the OnePlus, however; at least double that of the XR. While a direct comparison would be disingenuous as iOS is better optimised to take advantage of its memory than Android, it’d be reckless to ignore how the extra thinking room might even the playing field somewhat.

Neither phone is expandable with OnePlus cutting out the base 64GB storage option found on its predecessor and instead giving customers a choice of either 128GB or 256GB of internal space. There’s greater variety from the iPhone, with all three storage options offered by the previous OnePlus on the table.

This newest iPhone sports the latest and greatest release of Apple’s mobile operating system: iOS 12. That means new digital wellbeing tools such as Screen Time, better control over your notifications and more fun features like the aforementioned Memoji, set within an almost identical experience to that of iOS 11.

With the release of the OnePlus 6, the company was proud to announce that it would be among the first manufacturers to push the (then upcoming) Android 9.0 Pie onto its devices in the near future. It followed through with the 6 and has brought a slightly modified take on that same experience to the 6T out the box.

OxygenOS, as it’s known, stays faithful to the stock Android experience but drops in a few meaningful additions like dual apps, the ‘Shelf’ and gesture support. It makes for a more seamless and coherent experience than iOS on the XR, with greater flexibility surrounding interaction and customisation too.

If longevity is a concern, the OnePlus will likely serve you best. Sure, it loses out on the convenience of the XR’s wireless charging but the 6T’s battery is significantly larger and supports the company’s Fast Charge tech, which comes built into the in-box adapter.

The iPhone XR supports fast-charging too but you’ll have to be prepared to fork out even more money for the option to use the feature, as Apple only bundles a basic 5W charger in-box.

OnePlus 6T vs iPhone XR – Which one will take better pictures?

The iPhone XR may only sport a single main sensor but it’s still unquestionably excellent. Apple still has a ways to go in low light versus the best in the business and the company’s approach to image processing does seem to be more artificial on this generation of iPhones, but the 12-megapixel OIS-laden (optical image stabilisation) camera is still a treat.

It leverages the company’s new Smart HDR capture technology, can pull off portrait mode shots with adjustable bokeh, just like its dual-lensed cohorts and it shoots 4K stabilised video at up to 60fps.

OnePlus has poured plenty of time and energy into its cameras this past year and in bright, naturally-lit scenarios it can go toe-to-toe with the likes of Apple. But just as with the 6 before it, the 6T still struggles with the details. Low light-shots still appear on the grainy side, even with the dedicated night mode, and dynamic range, despite the inclusion of HDR, just isn’t as accomplished as Apple’s setup.

That isn’t to say the OnePlus 6T takes bad photos, on the contrary. It just won’t yet give the likes of Apple or Google real cause for concern.

OnePlus 6T vs iPhone XR – Which offers more for your money?

The OnePlus 6T is the company’s most expensive phone to date. Losing the base storage option offered up by its predecessor is likely one of the main reasons why the price is higher this time around but the decision to include new technologies like that in-display fingerprint sensor also up the cost too.

Despite this, it still rings in as significantly more affordable than the iPhone XR, which starts at £749/$749 (versus £499). The iPhone may have better raw performance and a superior camera but the OnePlus 6T still offers plenty of grunt, far greater longevity, fast-charging and a more versatile user experience.

Do you think the OnePlus 6T brings more to the table than the iPhone XR? Let us know your thoughts on Twitter @TrustedReviews.