OnePlus has joined the bandwagon at MWC 2019, unveiling a 5G-enabled smartphone.

However, the company’s taken a very different marketing tactic to launch the phone to most other vendors, such as Samsung with its Galaxy Fold , Huawei with its Mate X or the V50 from LG.

Specifically rather crow about a finished showpiece device with a nifty foldable or modular design, OnePlus has decided the best way to get people to talk about its 5G phone plans is to tell the world next to nothing.

There’s no specs, no price info, not even a name. Nothing. Even if you take the time to walk to its stand at Qualcomm all you’ll find is a nebulous screen, housed within a white plastic shell that’s then protected by a final chunky outer shell made of, what a showroom representative joked to me, was bullet proof glass.

After 20 minutes quizzing the company about its 5G plans and demo phone, here’s what little we do know about the OnePlus 5G phone.

The tech press on show at MWC won’t be getting either the price or release date for this phone quite yet. The two devices locked behind glass were prototypes that aren’t intended for commercial release. 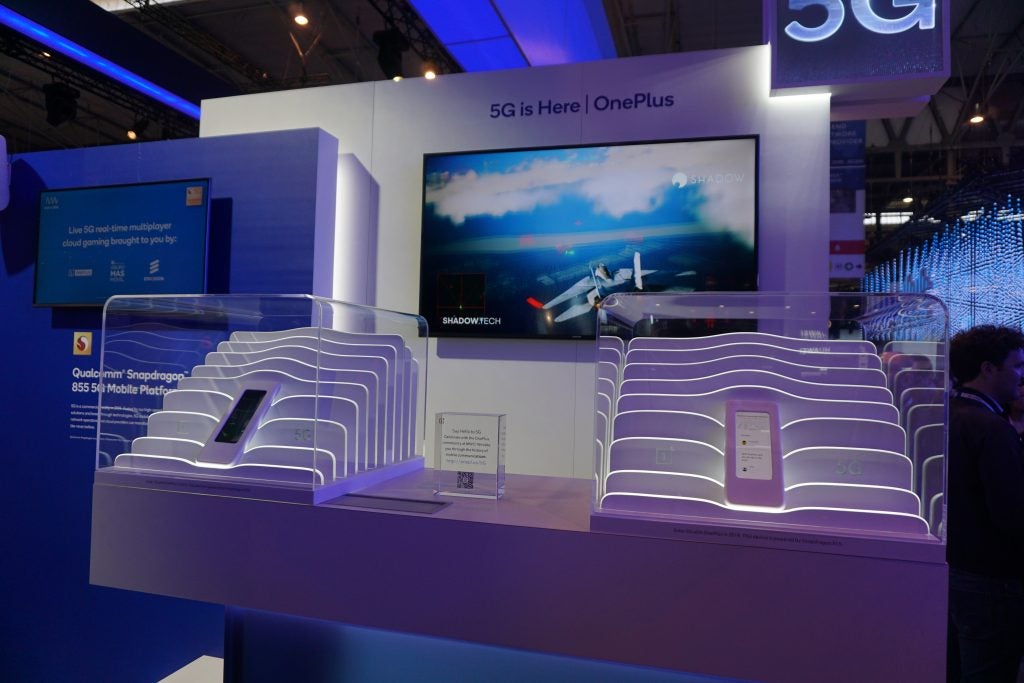 The plastic framing around the display meant literally all we got to see was a screen streaming a game onto a TV in high def and another running a OnePlus community webinar.

The only thing we can infer is that the units feature either Qualcomm’s Snapdragon X50 modem – the one used in every other 5G phone we’ve seen this MWC – or the recently-announced Snapdragon X55. Though the rep just smiled and didn’t answer when I asked which it was. They also didn’t take kindly to my request to peak under the box to make sure there wasn’t a gaming PC running the “cloud gaming demo” they were showing off.

The only snippet the company’s revealed about the demo and its 2019 5G plans is that the demo units were connected to a demo 5G network setup by Qualcomm and that it’s working with “carrier leaders such as EE” in the UK to eventually launch a full fat 5G phone to consumers at some point.

Despite the lack of info the demo was still pretty impressive. The demo saw the company running a triple A fighter pilot game with its graphics cranked on a big screen Full HD TV – such a process and title would normally be way too much for a smartphone’s hardware.

The trick here is that the computational power wasn’t coming from the phone. It was being majority handled in the cloud – which is a fancy way of saying other computers and servers connected to the network. Reps told us that all of the 5G demos at Qualcomm’s stand were using Ericsson’s network.

If the networks can manage to do this at scale it will be a key selling point for 5G contracts and smartphones, letting them run processes that would normally be beyond their hardware.

Additionally, if the networks can ensure coverage across wide areas it could also eventually drive down the cost of hardware as, if the majority of the computational power is being provided by a network, you won’t need expensive top notch hardware locally on your device.

Excited about a 5G OnePlus phone or cloud gaming on a phone? Let us know on Twitter @TrustedReviews