OnePlus 5 vs Nokia 8: These two Android titans are both formidable handsets, but which one is right for you?

Earlier this year, OnePlus showed its hand with the powerful OnePlus 5, a blisteringly powerful smartphone that costs less than £500. A steal at that price, the OnePlus 5 has unsurprisingly landed to positive critical reception and is one of the most widely recommended Android phones for 2017.

Then there’s the Nokia 8, the first flagship phone we’ve seen come out of Finnish phone maker HMD – the company that’s paying to use the Nokia brand license. It’s certainly got the looks and the branding heft, but can it keep pace with the OnePlus 5? We take an early look and see how the phones rack up.

Bear in mind, however, that we can only compare the phones so much without having completed our full Nokia 8 review, so we can’t say for sure which phone will have better performance yet.

If you want a brief comparison of the two phones, scroll down to the bottom of this page. Otherwise, read on for a full run-down of both handsets.

The OnePlus 5 design is familiar enough, with a smooth flat body that curves at the edges. It’s typical of modern smartphone design, and has been generally well-received by phone reviewers.

It’s a fairly sizeable bit of kit – and bigger than the Nokia 8 – courtesy of it’s large 5.5-inch display, but it’s still fairly slim at 7.3mm and lightweight at 153 grams. You can buy it in the following colour options: Midnight Black, Slate Grey, and the new Soft Gold.

The Nokia 8, meanwhile, has a similar design, although the phone is marginally thicker at 7.9mm, and has a rear casing that tapers much more significantly than the OnePlus 5. It’s also a heavier phone at 160 grams. Still, it’s very attractive, and we’re particularly fond of the coppery colour, which we’re expecting to become an increasingly common paintjob for phones – it’s even mooted to appear as ‘Blush Gold’ on the next Apple iPhone, the iPhone 8.

Here are all of the Nokia 8 colours, for reference: Polished Blue, Polished Copper, Tempered Blue, and Steel.

Nokia 8 vs OnePlus 5 – Hardware and Software

Screen: The key advantage that the OnePlus 5 has is its hefty screen size; 5.5-inches is still a respectable amount of screen, even by 2017’s gargantuan display standards. The downside is that the display resolution is a mere 1920 x 1080 pixels, which works out at a middling 401-pixels-per-inch (ppi) pixel density.

By comparison, the Nokia 8 has an admittedly smaller 5.3-inch screen, but it trumps the OnePlus 5 thanks to the QHD resolution of its screen – that’s 2560 x 1440 pixels, in layman’s terms. That works out at a very dense 554ppi, and should result in seriously sharp visuals – though how it’ll look in practice remains to be seen.

Performance: Both phones run on Qualcomm’s latest system-on-a-chip, the Snapdragon 835, so we’re expecting both to offer similar processing output. This is the same chip that we’ve also seen power flagship rivals like the Samsung Galaxy S8 and HTC U11.

It’s arguably the most powerful mobile processor on the market right now, which means you should have no trouble getting anything done on either phone.

The OnePlus 5 may have a slight advantage, however, in that it trumps the Nokia 8 on memory. The OnePlus 5 comes with 6GB of RAM as standard, with an option to upgrade to a very generous 8GB. But the Nokia 8 defaults at 4GB, which isn’t particularly special by today’s standards.

We should also mention that although both phones offer 64GB of base storage, the OnePlus 5 is also available in a 128GB variant – something the Nokia 8 appears to be lacking.

Camera: The OnePlus 5 camera was one of the phone’s headline features; it was the first OnePlus phone to feature a dual-camera arrangement, after all.

The rear-facing shooter on the OnePlus 5 is comprised of two different cameras, which work in sync to provide better performance in low light conditions, improved depth of field, and generally higher-quality snapping. One camera offers 16-megapixel capture with an f/1.7 aperture, while the other can take 20-megapixel shots with an f/2.6 aperture.

The OnePlus 5 also sports a respectable 16-megapixel f/2.0 camera on the front, for good measure.

Excitingly, the Nokia 8 has also followed this year’s dual-camera trend, and has opted for a double-shooter of its own.

Unlike the OnePlus 5 dual-camera module, the Nokia 8 provides more lowly 13-megapixel capture – this doesn’t necessarily impact quality mind; just the size of the photos. Both cameras feature an f/2.0 aperture, with one shooting in colour (with optical image stabilisation) and the other in monochrome. These two images are then combined to offer a better quality image with (hopefully) improved depth of field.

The Nokia 8’s selfie shooter is also worse on paper, described as a 13-megapixel f/2.0 front-facing camera. But then we won’t know which phone’s camera setups work better in the real world until we complete our full Nokia 8 review – stay tuned. 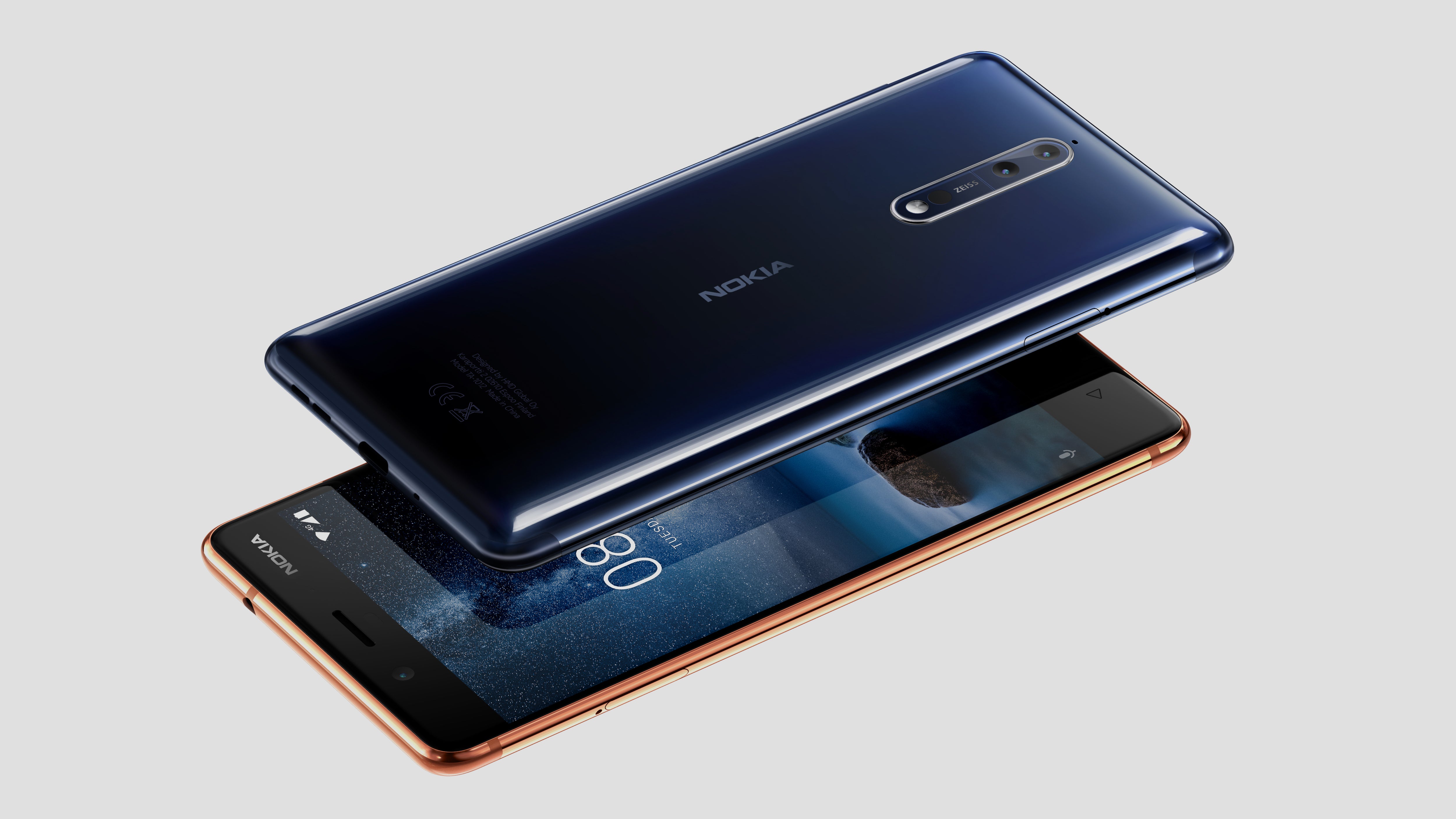 Battery Life and Other Hardware: We can’t speak to the Nokia 8’s battery life just yet, but we already know that the OnePlus 5 easily makes it through a whole day of usage thanks to its 3,300mAh battery cell.

The Nokia 8, by comparison, features a 3,090mAh cell, which is marginally smaller. Does that mean battery life will be worse? Not necessarily. The fact that the Nokia 8 uses a smaller screen will help, although the higher-resolution panel will create a bigger drain on the battery. Various software and hardware optimisations also have to be taken into account, so we won’t know anything for certain for a good while yet.

The two phones are fairly well-equipped by other measures however, with the OnePlus 5 and Nokia 8 both making use of USB Type-C charging, NFC connectivity (for contactless mobile payments), and a fingerprint scanner for user authentication.

Software: There’s not much to say on the software front; both the OnePlus 5 and Nokia 8 ship with Google’s latest Android 7.0 Nougat software.

It’s a capable mobile operating system that’s been refined over many years, and is certainly on par with Apple’s iOS. OnePlus does make some minor tweaks to the software using its own Oxygen OS overlay, but there aren’t any significant changes that will massively affect user experience.

For more information on the software, check out our Android Nougat guide.

We don’t actually have Nokia 8 pricing for the UK yet, but we do have European pricing.

In Europe, the Nokia 8 costs €599 to buy outright, which is a fair amount more than the OnePlus 5’s European pricing of €499/€559 (pricing depending on the model you choose).

If that’s the case, it will be a hard sell for Nokia to convince customers that its flagship smartphone is worth the extra charge over the OnePlus 5, a handset that has been roundly praised for its powerful specs and great-value price tag.

Nokia 8 vs OnePlus 5 Design: The OnePlus 5 and Nokia 8 are both very attractive phones, but the former is both lighter and thinner. The latter, meanwhile, has a greater range of colour options. You’ll be happy with either in terms of looks though, we’d wager.

Nokia 8 vs OnePlus 5 Specs: The OnePlus 5 appears to have the edge over the Nokia 8 in terms of specs, but we’ll need to fully review Nokia’s latest before coming to a firm decision based on real-world usage.

Nokia 8 vs OnePlus 5 Price: In the absence of UK pricing for the Nokia 8, we can only say so much. However, with European pricing suggesting that the Nokia 8 will be the more expensive of the two phones, we’re inclined to say that the OnePlus 5 offers greater value for money – at this early stage, anyway.