Tegra X1 features coming to Android phones and beyond in 2015

While Qualcomm has undoubtedly stolen a march on Nvidia to become the go-to mobile chip supplier of recent years, it’s arguably Nvidia that’s come up with the most impressive hardware.

Last year’s Tegra K1 may only have found its way into a small handful of devices, including Google’s own Nexus 9, but it ended the year (alongside Apple’s A8X) as the fastest mobile processor in the business.

Now the freshly announced Tegra X1 is set to take smartphone, tablet, and even in-car performance into the stratosphere. Here’s how…

Supercomputer performance in your pocket

With 256 processor cores, the Tegra X1 is twice as fast as last year’s Tegra K1. But that’s not the most impressive comparison here.

Nvidia is calling the Tegra X1 a “mobile super chip,” and for once it’s not hyperbole.

The Tegra X1 is the first mobile chip to burst through the 1 teraflop throughput barrier. To place that performance milestone into context, the first fully fledged supercomputer to achieve this feat was ASCI Red, and it only managed to do so back in 2000. 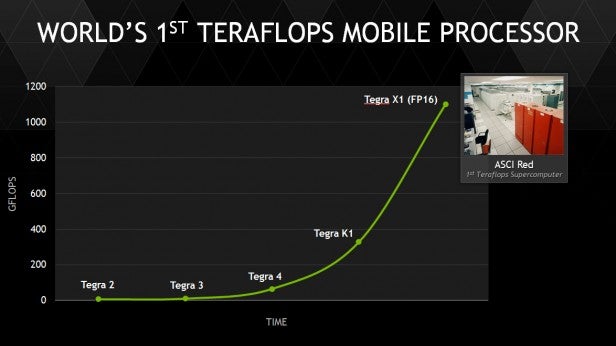 The big advance made with the Tegra K1 last year was a shift to the same Kepler GPU architecture that drove their desktop and console graphics cards. This resulted in graphical performance that fell only slightly short of last-gen home games consoles such as the Xbox 360.

Now the Nvidia Tegra X1 has flat out overtaken the last generation of consoles in GPU terms, with real-world performance gains of 72% over the K1, according to benchmarks conducted by Anandtech.

One major reason for this leap is that Nvidia has switched to its Maxwell architecture, which is the same as has been used in its top-of-the-line GTX 980 desktop graphics card.

This also reflects an even bigger shift in the company’s underlying priorities. This Maxwell GPU architecture is the first to have been designed primarily with mobile in mind. The K1’s Kepler architecture, conversely, was designed for PC hardware first and foremost, and then adapted to mobile.

This new mobile-first philosophy accounts for the fact that Nvidia’s most advanced technology is already appearing in a mobile chip, with the huge performance spike coming as the natural result. 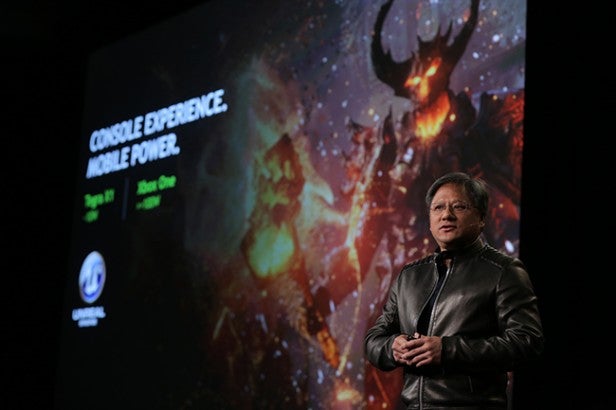 Nvidia recently used the Unreal Engine 4 Elemental demo to demonstrate the X1 GPU’s polygon-pushing capabilities, but just as impressive as the eye candy was the fact that the task drew only 10 watts of power. Microsoft’s Xbox One console typically eats up around 100 watts when running the same test.

One set is comprised of high performance A57 cores for crunching through those advanced tasks like 3D games and 4K video. The other is made up of efficient A53 cores, which can drive the bulk of the phone’s general operations without draining much juice.

The result is greater battery efficiency, which is only helped by the move to a smaller 20nm production process. Smaller chips, as we’ve come to learn, mean less heat and less power usage.

The Tegra K1 could decode 4K content, but only at 30 frames per second (fps). The Tegra X1 improves matters by being able to decode 4K or Ultra High Definition content at a silky smooth 60fps.

SEE ALSO: Snapdragon 810 – What you need to know

Last year’s Tegra K1 made the switch to a 64-bit architecture, making it the first Android chipset to do so ahead of the arrival of the 64-bit Android 5.0 Lollipop.

Still, it’s worth noting that the Tegra X1 is also 64-bit, as we will see a wider shift towards this standard in 2015.

64-bit chips can process more data at once than previous 32-bit CPUs, but that’s not to say that we’ll see any major benefits from such a setup this year.

No app or OS really needs this level of simultaneous processing power, and we probably won’t see major gains on this front until our smart devices start carrying more than 4GB of RAM – the current limit for 32-bit hardware. Still, it’s a nice, forward-facing feature to have in your phone. 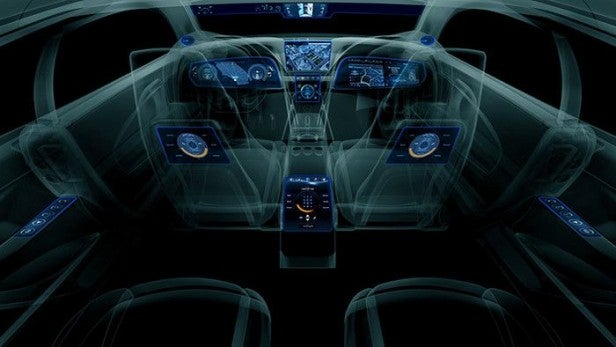 Coming to a car near you

Given much of what we’ve discussed above, it might seems as if there’s far more power in the Tegra X1 than any modern smartphone or tablet really needs.

Nvidia is clearly thinking along similar lines, and it used its CES 2015 announcement to reveal that it’s branching out into the automotive industry.

Nvidia intends for its X1 chips to power many of the functions in the cars of tomorrow. With inputs for 12 hi-res cameras, the Nvidia Drive PX is described as “a radical step towards the era of auto-piloted cars,” with surround-vision capabilities enabling auto-parking and auto-valet functions.

Nvidia Drive CX, meanwhile, is a cockpit computer that can power your in-car entertainment and information. Or infotainment, if you want to use the amalgamated douchebag expression.

Apparently, with the X1 on board, Nvidia’s system can light up nearly 17 million pixels – that’s ten times the number in the cars of today. Basically, imagine the automobiles featured in any sci-fi film of the past 15 years, with lit-up touch panels everywhere, and you’re probably on the right track.