Nvidia Ampere has finally been revealed and it’s a doozy. If you’ve got an RTX 2080 Ti sitting in your rig, you’re probably wondering whether it’s time to upgrade. So here’s the lowdown on RTX 3090 vs RTX 2080 Ti.

While the console gaming world has given almost all of its focus to the upcoming PS5 and Xbox Series X, those who are PC enthusiasts or straddle the cross-platform divide have known the Ampere announcement was the biggie of the year.

The big question for those PC-havers who are excited by this announcement will be whether it’s time to upgrade. For those who like to build their PCs toward the ultra-premium end of things, the question boils down to Nvidia GeForce RTX 3090 vs RTX 2080 Ti. “Who wins?” isn’t that tough of a question, but just how big is the difference? 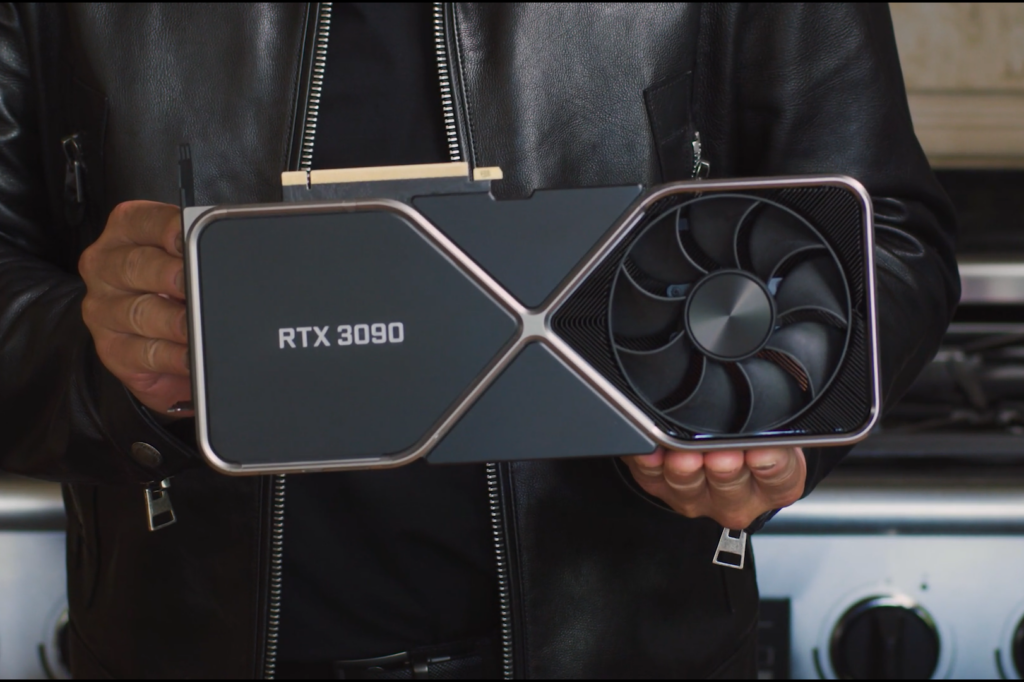 For pricing, Nvidia announced the Founders Edition of the new RTX 3090 would come in at the £1399, so you can expect third party retailers to price around that mark too.

Instead, the RTX 3090 is closer to an Ampere-equivalent of Nvidia’s previous beast of a card, the Nvidia RTX Titan – a card which Nvidia prices at £2452.

We might see an Ampere Titan eventually but, for now, that’s over £1000 less for the best graphics card Nvidia has to offer – making that £250 uplift from RTX 2080 Ti to RTX 3080 look all the more appealing.

It’s very possible that the RTX 2080 Ti gets a sizeable discount though, so keep your eyes peeled for that. Although Nvidia claims the new RTX 3070 is more powerful than the former flagship, despite being priced at an affordable £469. So it would have to be a very big discount to make the RTX 2080 Ti worthwhile.

It wouldn’t be PC gaming without digging into the nitty gritty of the specs. Let’s take a look at the numbers before considering what the key points are:

So, what do these specs mean? In layman’s terms, Nvidia claims the RTX 3090 makes 8K HDR gaming a possibility – something unimaginable with even the 2080 Ti. Nvidia is also touting that gaming with up to 360Hz is achievable and you’ll also be able to get a 4K 144Hz signal over HDMI 2.1.

Touching back on the RTX 3090 with regard to Nvidia’s previous top-end card, the RTX Titan, Nvidia claims the new card is 50% more powerful but also 10x quieter. The performance boost makes that over £1000 difference look stunning and well worth the upgrade from 2080 Ti.

The RTX 2080 Ti, meanwhile, is a great 4K card, but often struggles to run modern AAA games at 60fps or over. That should be no problem at all for the monstrously powerful RTX 3090.

Nvidia showed off the new look for its RTX cards, with a unique fan design, and it’s hard to argue the new design isn’t far more stylish. Those who enjoy a more mechanical look may prefer the RTX 2080 Ti but if you want a cleaner design than RTX 3090 is a big step up.

Of course, the designs we are referring to are only Nvidia’s Founders Edition cards, with designs coming in many variations from third party manufacturers. We already know that the RTX 3090 (and the rest of Ampere) will only feature the unique fan design on the Founders Edition while third party cards will look far more traditional.

You’ll have to wait until we get our hands on the RTX 3090 and can provide those juicy benchmarks before we deliver the final verdict but, if Nvidia’s claims are at all close to reality, then the choice is an easy one.

If you are looking for the best-of-the-best in gaming then RTX 3090 looks set to comfortably take the crown. The only thing that could sway your decision here is money. If you’d rather spend a cash amount closer to the RTX 2080 Ti cost then you’ll want to look towards the new RTX 3080 card.

Nvidia called Ampere its greatest ever generational leap, so if you’re keen to see a fantastic 4K performance, and maybe even dabble with 8K gaming, the RTX 3090 graphics card certainly promise an exiting upgrade.