It packs 6GB of frame buffer and all the high-end features you’d expect from a GeForce GPU at this level — a dual aluminium heat sink, a copper vapour chamber and a blower fan for heat exhaustion.

It’s running at 250W too, which yields a 2.3 times increase in performance per watt.

Nvidia sees this as the upgrade for users currently packing the Nvidia GeForce GTX 780 Ti of the GTX 680.

But, it’s been specifically designed to support 4K, virtual reality and of course Nvidia GSync.

Comparing the performance to the 780Ti and the 680, Nvidia’s statistics show that the GTX 980Ti is three times faster than the GTX 680 in performance at 4K resolution and offers an 80 percent increase over the GTX 780Ti.

Nvidia states that the idea is that with the GTX 980Ti, for the first time you can play “any game, ultra settings, on one card”.

This will come especially useful for the increased adoption of 4K monitors and other hardware.

“4K is growing and particularly at this high end of the market. Tonnes of gamers are looking for these kind of displays in this year and into the next. So 4K gaming is certainly a stand out usage case for [the Nvidia GeForce GTX 980Ti,” explained Nvidia’s mark Aevermann.

Of course, the new GeForce GTX 980Ti will fully support the upcoming DirectX 12 that will arrive in late July with Windows 10. That’s even up to DirectX 12 feature level 12_1, which offers features like conservative raster and raster order views as well as enhanced smoke, fire and lighting effects.

“The thing to realise about GeForce GTX 980Ti is that it’s the most advanced gaming GPU from a DirectX12 perspective.” 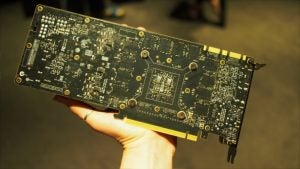