UPDATE: AT&T has posted an offical Lumia 1020 video on its YouTube channel, officially confirming the smartphone prior to Nokia’s launch later today.

Expect someone to get the sack at AT&T after they prematurely posted an official Nokia Lumia 1020 video to its YouTube account, mere hours before Nokia’s New York press event to launch the device.

The video briefly showcases some of the camera-centric smartphone’s new specs like its 6x zoom and 720p HD video capture.

Earlier today, all of the Nokia Lumia 1020’s specs were leaked online, as you can read below, but this new video certainly confirms we will be seeing an official unveiling tonight.

Original Story:
The Nokia Lumia 1020 specs have leaked ahead of tonight’s official unveiling by Nokia in New York, July 11.

A full specs sheet for the 41-megapixel camera smartphone, the Nokia Lumia 1020, has leaked online prior to Nokia’s official launch.

The camera-centric smartphone will have a 4.5-inch AMOLED HD Plus display with a 1280 x 768p resolution. That screen will be protected by Gorilla Glass 3.

The Nokia Lumia 1020 has a 1.5GHz dual-core processor with 2GB of RAM and 32GB of internal storage. As it is a Windows Phone 8 device, there’ll be 7GB of SkyDrive space available to the user as well.

All those 41-megapixel camera rumours were true, as the Nokia Lumia 1020 will come with the aforementioned rear snapper, Xenon flash and Full 1080p HD video recording capabilities.

Nokia’s latest smartphone can also be purchased with an optional grip that not only provides a dedicated camera shutter button, but also an added 1020mAh battery capacity.

The grip also includes a screw mount for attaching the 41-megapixel camera smartphone onto a tripod.

Connectivity-wise, the Nokia Lumia 1020 is compatible with Bluetooth, NFC, 4G LTE, HSPA plus and ships with Nokia Here maps and Here drive pre-installed.

The spiritual upgrade to the Symbian-running Nokia PureView 808, the Nokia Lumia 1020 will be a Windows Phone 8 device that has the same focus on smartphone photography capabilities.

The smartphone will ship in white, black and yellow come launch, with the grips matching the Nokia Lumia 1020’s colour palette.

Nokia’s New York-based “41 million reasons” event is due to start at 4pm BST today, July 11. It will be interesting to see if these leaked specs line-up with the real Nokia Lumia 1020 when it arrives later today. 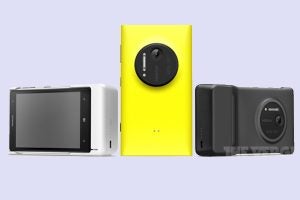 Next, read our review of the Nokia Lumia 925.

Via: mynokiablog
Pics: The Verge