More pictures of the Nokia EOS PureView smartphone have leaked online, showing an aluminium casing for the 41-megapixel camera phone.

Expected to be revealed at a New York event on July 11, the Nokia EOS PureView has appeared online again but this time with an aluminium body and looks to be taking design cues from the Nokia Lumia 925.

The latest images come from Chinese sources on Weibo and provide a few more snapshots of the 41-megapixel camera phone to complement the Nokia EOS PureView pictures leaked online last week and the camera video that also appeared.

These previous leaks showed the Nokia EOS to have a polycarbonate body, but if the latest photograph is accurate, Nokia could launch the EOS with an aluminium body to differentiate it from all the Lumia products already on the market.

Of course, this may be a prototype of the device, so we’ll have to wait until the July 11 New York event, which bears the heading “Zoom. Reinvented” to see what the Nokia EOS will look like.

The smartphone is rumoured to pack a 41-megapixel Carl Zweiss image sensor in the rear with Xenon flash, potentially with optical image stabilisation and variable aperture. From the images we’ve seen so far, the camera should bulge out from the rear of the smartphone, slightly distorting its otherwise straight back.

Although the actual screen size is unknown, it should offer 1290 x 768p resolutions and 32GB of internal storage.

Any other specs for the Nokia EOS PureView are still unknown, but it will be the upgrade to the Nokia PureView 808 device launched last year.

The Nokia PureView 808 used the Symbian OS and was extremely successful due to its excellent image quality and giant 41-megapixel sensor with lossless zoom technology. 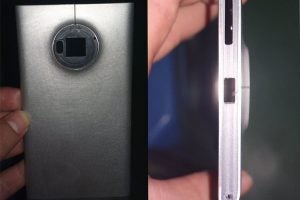