The Nokia 7.1 Android 10 update has started rolling out, giving the mid-range smartphone a wealth of upgrades.

The update is rolling out now, though it will take some time for it to hit every active Nokia 7.1 – so don’t worry if the push notification for it hasn’t arrived on your handset yet.

The update upgrades the Nokia 7.1 to run the latest version of Google’s OS. It brings with it a wealth of subtle UI improvements, performance fixes and useful new features.

Highlights include gesture controls that let you skip tracks on Spotify with a flick of your wrist, advanced privacy controls that make it easier to see what data you’re sharing and a focus mode that can block out things like notifications when a specific app or process is running.

Live Transcribe is an awesome feature Google debuted on the Pixel 4 that does exactly what it says on the tin. It’ll transcribe incoming voices in real time, which is super useful when taking notes in class or during an interview. We’ve reached out to Nokia for clarification if and when the feature will appear on its phones.

The 7.1 is one of many Nokia phones to get a speedy update to Android 10 this year. The company has also issued updates for the Nokia 9 PureView and Nokia 8.1, which reviewed better than the 7.1 when we tested them earlier this year. 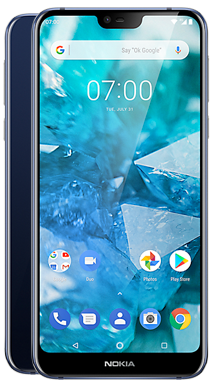 Get your hands on the Nokia 7.1 for just £119 - one of the best smartphones on the market for its stellar price.

Though it is on paper impressive and competitively priced with its closest rival, the Pixel 3a, the Nokia 7.1 suffered from poor battery and performance issues when it first came out.

We’ll be dusting off our Nokia 7.1 review unit to see if the move to Android 10 helps alleviate these issues, check back later with Trusted Reviews for a breakdown of our findings.