No Man’s Sky is finally out, and it’s pretty good. It’s not for everyone, but the space adventure that Hello Games has created is – at least initially – incredibly captivating. But, much like Destiny and Frontier’s Elite Dangerous, Hello Games has already stated that No Man’s Sky is a game that will shift and evolve throughout its lifetime, receiving free updates and new features as the game progresses. Here are eight areas we think the game could improve.

The allure of No Man’s Sky is its planetary exploration, but no matter how many worlds you find, you’ll discover that you end up doing a very similar set of tasks on each. You’ll land, take stock of the first sights of the world, and then get to work, mining and scavenging from caves and abandoned buildings. You might find the occasional abandoned ship that you can repair and make your own, or a rare sign of intelligent life in one of a few random outposts.

Watch: What kind of game is No Man’s Sky?

As the game gets updated, we hope that Hello Games add more variation into its gameplay, either via randomised specific missions that give you a purpose on planets, or by adding in new emergent discoveries that you can find when wandering away from your ship.

The planetary stuff in No Man’s Sky is truly fantastic. Even after dozens of unique worlds, the thrill of setting down onto barren deserts and lush jungles is just as strong as ever. However, No Man’s Sky seems to sometimes forget that it is, at its core, a space game. Going forward, we’d like to see more variation in the space stations themselves, as well as newer, cooler things to find while flying about in your space ship.

There’s only so many pirate ambushes you can take before hoping for something different; give us ringed planets, more interesting stars that are more than just pretty backdrops, and random encounters with aliens in space.

The game’s appeal has so far been that you can choose to specialise in certain paths; be a trader, become an explorer, upgrade your ship and become a fighter. In its current state, these specialisations don’t really exist, at least not in such a defined way. In essence, everyone is a trader, scavenging planets for resources with some combat bits in between. 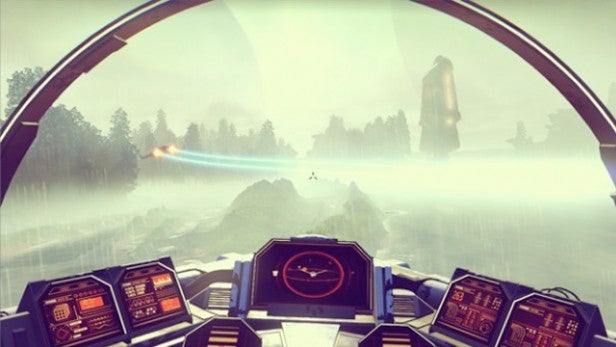 In future updates, it’d be great to see unique skill-trees added, with progression incentives for players to really invest time in the four pillars of gameplay that Hello Games specifically touted before launch. This will give purpose to the game beyond its current route of survival and exploration.

Speaking of combat, it really needs some refinements both in space and on land. It’s by no means terrible, and the fact No Man’s Sky is specifically not a combat game makes its janky controls much easier to bear, but the combat – especially in space – just doesn’t have the same peril as games like Elite Dangerous.

The multi-tool is a cool idea, too, but having to go into your inventory to recharge your gun, or to refill the shields on your ship, just feels like an unwanted interruption to the flow of the game.

No Man’s Sky’s inventory management system is both confusing and clunky. The fundamental mechanics of its survival core are fine, even compelling when you get into a spot of bother as your life support depletes in the middle of a radiation storm. But the creation of certain items feels like busy work – in order to create the warp cells needed to fuel your hyperdrive for interstellar travel, you have to create three other items.

It just feels a bit padded, and instead we’d like to see a more streamlined way that the game can push you to collect resources.

Getting around No Man’s Sky is made far tougher than it needs to be thanks to a convoluted galactic map and a lack of any real waypoint systems. If you find something cool, like an area full of gold deposits that you can mine for trading, but have no inventory space to fit it all, you’re essentially left in the lurch, unable to find it again. 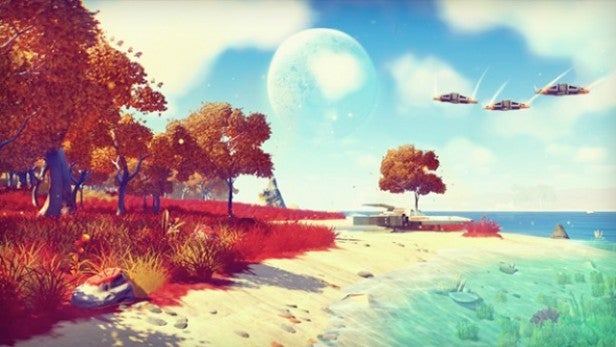 The same goes for marking systems in the galactic map – the most useful way I’ve found of marking planets is by naming them for what they’re useful for, but naming planets “GoodForGold” isn’t the most intuitive way of doing this.

At launch, the game’s frequent crashes are a pain and we hope that No Man’s Sky’s stability problem is ironed out in the next coming weeks. This also goes for the game’s awkward, sometimes frustrating save system. Without a real way to manually save particularly often, you have to rely on the game to do it for you – either when you leave your ship, or when you find a save beacon somewhere on a planet.

What’s annoying about this is that the game doesn’t save when you get back in to your ship, only when you get out of it. This leads to weird moments where you go to leave a planet and hop into your ship, hop back out, and hop back in to leave the planet with a fresh save guaranteeing you don’t lose any progress.

The big obvious one, but multiplayer is arguably the game’s most sorely sought after feature. This is an enormous, lonely game; one that occasionally feels too lonely. What doesn’t help is that the gameplay variation on offer doesn’t quite give this vast, lonely world the mileage it needs to keep players playing alone. Without the hubs of activity that thrive in Elite Dangerous, multiplayer features like the naming planets and animals is novel but otherwise fairly unsatisfying. Give us the opportunity to meet our friends, or to kill our enemies. It will give the game a human heart that, at the moment, it’s kind of missing.