There’s an awful lot to love about the Nintendo Switch, but it’s not a perfect console. Here are some common Nintendo Switch problems, issues and bugs – and how to fix them where there is a known solution.

We’ll be regularly updating this page with all the latest issues, so be sure to bookmark it. Also, feel free to reach out to us on Twitter we’ve any issues, we’d be happy to have a bash at helping you with them.

1) Nintendo Switch Dead Pixel Problem: What is it and what can I do?

The latest Nintendo Switch problem to rear its head is the ‘dead pixel’ issue, whereby users are noticing dark patches on their device’s touchscreen as a result of stuck or dead pixels.

This might be the most frustrating problem yet, as Nintendo is currently refusing to cop to it being a legitimate complaint.

Instead, the Japanese games giant has issued a statement saying that “small numbers of stuck or dead pixels are a characteristic of LCD screens,” adding that this is “normal and should not be considered a defect.”

Worse still, this isn’t the first time Nintendo has experienced this issue with one of its handheld console – the DS also suffered from dead pixels when it launched back in 2004, and other manufacturers like Sony (with the PSP) have had similar issues.

The slightly better news is that you have a couple of options at this early stage.

The first is to try and return your Switch, though your mileage may vary here.

As Nintendo is sticking to its guns and refusing to class this as a ‘fault’, High Street stores don’t technically have an obligation to refund you, especially as you’ll have to have broken the seal to have noticed the problem in the first place.

However, it’s worth a shot, as in our experience you might get lucky and encounter a sympathetic fellow gamer behind the counter. 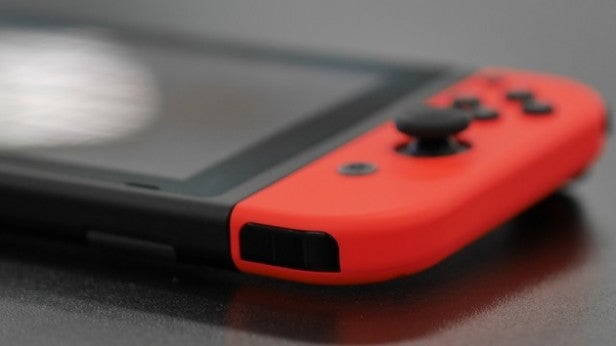 If you bought the Switch online, you’ve got an even better chance, thanks to the Consumer Contracts Regulations. This stipulates that all products purchased online can be returned for up to 14 days. So long as the seller didn’t specifically state that “dead pixels may occur in this product” (or similar), you should be covered.

Your final option is probably the least attractive, but it’s still worth mentioning. Back when the DS suffered a similar fate, Nintendo eventually backtracked on its initial stance and started offering refunds.

Given the amount of negative publicity the dead pixel problem is getting, we suspect Nintendo may opt to do this sooner rather than later, but we don’t know for sure.

Some users have found their console won’t turn on. Besides the obvious flat battery, which we’re sure you’ve already thought of, your next option is hard reset. Here’s what Nintendo says:

Then, press the POWER Button again [emphasis added] to turn the console on again.”

That last bit is important. You can’t just hold down the button to reset the console, you have to then press the button again to turn it on.

If you have this problem and this solution didn’t help, please let us know in the comments.

This has unfortunately been a pretty common problem among early units, and a particular issue for us.

While playing Zelda: Breath of the Wild with the Switch in its Dock and the Joy-Con either in the Grip or held in each hand, at times players can lose control of Link on the left analogue stick, housed in the left Joy-Con. Link will continue wandering in a direction for a few seconds before the player regains control, which can significantly hamper the gameplay experience.

After testing, it seems that when the line of sight between console and Joy-Con is impeded, the console has huge problems reading the input of Joy-Con L. I’ve tested this myself in the console’s analogue stick calibration options and it’s clear that even by simply placing my hand over the controller the Switch has real trouble tracking the analogue stick input.

Nintendo has acknowledged the problem, and now has a fix: 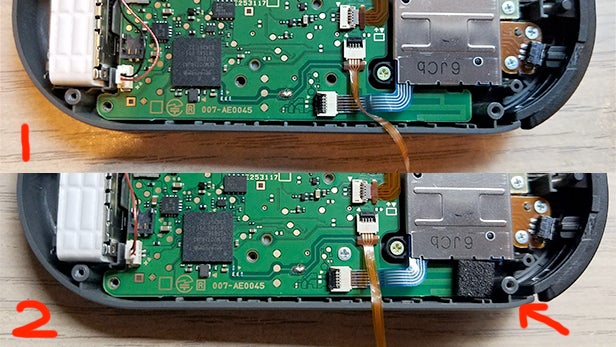 The fix involves adding a small piece of conductive foam to eliminate interference, as the above photo from Cnet shows.  If you have this problem, call your local Nintendo customer service number and they will arrange for your Joy-Con to be fixed for free within days.

The Nintendo Switch supports USB-C, meaning you can theoretically charge the device using any portable battery pack. However, the Switch includes a substantial battery to power it, and therefore you’ll need a pretty powerful battery pack to charge it quickly enough.

A standard battery pack’s voltage output may be too low to charge the device. Also, the Switch seems to require a USB-C to USB-C charger in order to get its power fast enough. In our review battery testing, for instance, an Anker PowerCore 20100 was only able to charge the device 3% in 15 minutes, despite having a powerful enough output to match the Switch AC Adapter’s 5V/3A charge. It’s important to pay attention to a battery pack’s potential output as well as how much charge it can hold.

We can confirm, however, that the USB-C version of the same battery pack charged the console properly, so if you’re planning on buying a power pack for your Switch, make sure it has the correct output level and a USB-C port and your should be ok.

It’s possible that, when you place a cartridge in the Switch, the console won’t acknowledge that there’s a game inserted. Try removing and then re-inserting the cartridge into the console and seeing if the game works then.

If the cartridge still doesn’t work, try inserting another game (if you have one) to see if it’s a hardware or software issue. If this isn’t possible, the best bet is to return the game and try another cartridge before being able to assess whether it’s the Switch or game that’s at fault.

6) Can I use my wireless headphones?

Nope, sorry. The Nintendo Switch doesn’t support wireless headphones. Although the device has Bluetooth, this is reserved for the Joy-Con and Pro Controller. To use headphones they must be plugged directly into the Switch.

This is less than ideal when gaming on the go or even at home on the TV and you want to keep the volume down. If you’ve got a pair of wireless headphones which lack a headphone jack, you may want to invest in another, cheaper pair to play the Switch on your travels.

Alternatively, there are Bluetooth adapters that will plug into the headphone jack so you can connect to wireless headphones. 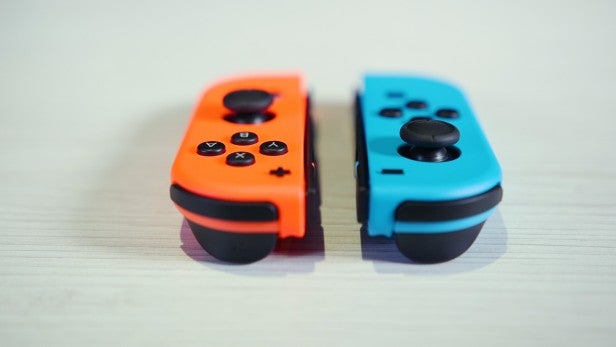 7) Does the Switch support Backwards Compatibility?

Again, you’re out of luck. Because of the Switch offering proprietary software storage in the form of game cartridges, you won’t be able to play your Wii U, GameCube or any other previously released Nintendo console games with this device. You could, however, buy them again via the Switch Virtual Console, but then we have another problem…

So, the Virtual Console – one of the major selling points behind any Nintendo system – is currently not planned, and instead you’ll have to make do with the selection of NES games provided as part of the monthly Nintendo

Nintendo is keeping its cards close to its chest about when the VC will be coming to the Switch, stating that an announcement will be made in the future. Unfortunately this is a “wait and see”.

Good news! It’s very easy (and relatively cheap) to expand the storage of the Nintendo Switch. Nintendo has been pretty poor with its offering of only 32GB of internal storage on the Switch, 6GB of which will be taken up by the operating system, meaning it won’t be long before you’ll need to expand.

Thankfully, the console supports microSD cards, which aren’t too expensive at retail outlets. Simply stick your microSD card in the slot found underneath the kickstand.

9) My kickstand broke off – what now?

Did you shove your console in the dock without closing the kickstand? You silly billy, don’t worry, Nintendo has thought about this and built it into the design of the Switch. The reason why the kickstand is made from a cheaper and flimsier piece of plastic than the rest of the device is because of this very situation. Nintendo expects players to snap the stand off.

Simply stick it back in and it should clip back in place. Nintendo does, however, warn against continuous wear and tear, so try to learn from your mistake. 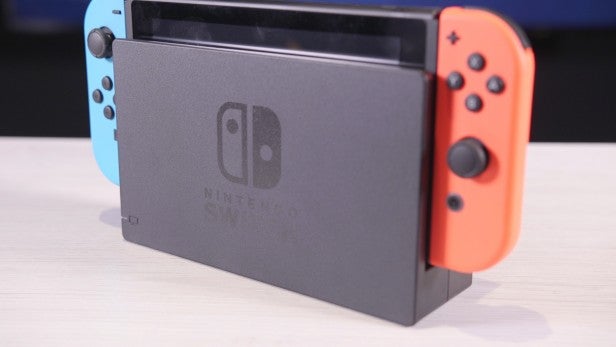 You can, alternatively, buy a Joy-Con Charging Grip which allows you to play and charge the controllers at the same time. But, as noted in our review, for £30 it’s an incredibly pricey accessory considering its tacky build and limited functionality. You’re better off saving your money and just playing in handheld mode for a while to get you through the evening before charging the Joy-Con overnight.

11) My game cartridge tastes funny, what’s up with that?

Nintendo coats the cartridges with a substance that makes them taste unpleasant to discourage children from putting them in their mouths. So, you know, find something else to chew on… perhaps not the console though, hey?

A number of Nintendo Switch users have reported issues of the console’s wi-fi suddenly borking out. If this happens to you, restarting the system seems to fix the issue almost everytime. Manually reconnecting to the network is a lost cause, so simply hold the power button to restart or switch off the console.

Try not to confuse this with Sleep Mode, which is an easy mistake to make.

Samsung has acknowledged an issue with some of its TVs, admitting that docked Switch units in sleep mode are liable to trigger its tellies to change HDMI sources.

It was originally meant to be a clever update on Samsung’s part, whereby its TVs would automatically switch to the a new device when an HDMI input was detected.

However, multiple complaints – there’s more than 17 pages worth of discontent on Nintendo’s Support Forum – indicate that the console wasn’t playing nice with the Switch and would swap over despite being in sleep mode.

It may not be just Samsung, either, as Reddit users are claiming that some LG TVs display annoying pop-ups saying that the Switch has just been plugged in, when it’s meant to be snoozing.

Unfortunately, Samsung hasn’t detailed whether the coming update will allow the user to turn off HDMI switching manually, or if the feature will be thrown out the door altogether. But the fact that it has recognised the problem means that a fix is likely to be incoming, so watch this space.

Got any other problems and/or solutions? Let us know in the comments below.