**ORIGINAL STORY**
The Nintendo E3 2014 show floor line-up has been leaked online, revealing some key game announcements ahead of next week’s conference.

It looks like the entire E3 Nintendo booth content has been leaked online by a Reddit user, including a list of all the Wii U games that will be given new trailers and playable demonstrations.

The official-looking document was posted by Reddit user “dragonquest”, and although we doubt all these games will be featured in the hour-long Nintendo Direct, it gives us a comprehensive look at what Nintendo has to show at the annual gaming conference.

We’re extremely pleased to see a new Hyrule Warriors trailer will be demoed at E3 and the game will be playable along with The Legend of Zelda: Unbound King.

There are a few unannounced Nintendo 3DS titles, including the unnamed Star Fox 3DS and Project S.T.E.A.M (Strike Team Eliminating the Alien Menace).

It also looks like Nintendo is giving games like Super Mario Sunshine an HD make-over for the Wii U, although we’ll only see footage of these remakes.

There are also some new Wii U titles in the pipeline, including Mario Party 10, something tentatively named Yarn Yoshi and another named Nintendo U.

As promised, Nintendo will take time at E3 2014 to talk about its new NFP toys that function in a similar way to Skylanders or Disney Infinity figurines.

“Super Smash Bros. for Wii U/3DS and Nintendo U demo units will include a set of NFP figures of Mario, Link, Samus and Pikachu for demonstration of the Wii U GamePad’s NFC compatibility with the software”, reads the leaked document.

Nintendo isn’t doing a physical press conference at E3, instead opting to stream a special Nintendo Direct broadcast on the morning of June 10, 9am Los Angeles Time or 5pm BST. 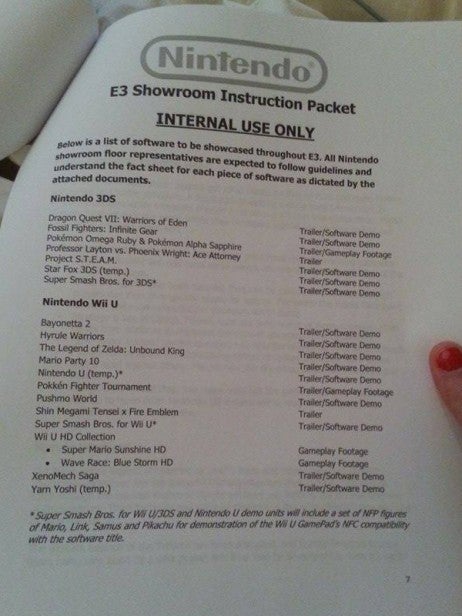