Nintendo has announced that it is discontinuing the Wii U Basic model in its native Japan.

Over on the official Nintendo Japan website, production of the Wii U Basic is listed as having ended, prompting a price drop to shift the company’s remaining stock.

There’s no news on whether the Wii U Basic will be culled in the rest of the world, but Nintendo’s hardware decisions in its home country are usually mirrored elsewhere shortly after.

The Wii U hasn’t exactly been a sales smash, of course, but the Basic model in particular has been a massive flop since the console’s launch in 2012. The Wii U Premium model dominated sales from the get go, and there have been rumours that the Wii U Basic would be killed off from around six months after its release.

The Wii U Basic’s problem is that it’s fundamentally hamstrung, coming with just 8GB of internal storage as opposed to the Premium model’s 32GB. Despite this it doesn’t cost that much less money – particularly with the discounts that have come the way of the Premium model in recent times.

Nintendo will be hoping for a boost to the Wii U’s sales with the launch of its latest first party game, Splatoon, on May 28.

It’s a rare instance of original IP from Nintendo. Equally unusual is the fact that it’s an online team-based shooter, but with messy paint shooters and cute squid characters in place of guns and gruff marines. 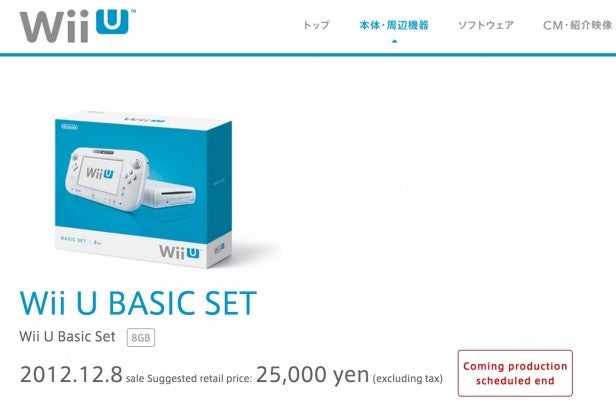