With more and more speculation that Google will launch an 8-inch tablet, the Nexus 8, soon we attempt to make sense of
the rumours and questions. What could the the Nexus 8 could look like
and where it will sit in Google’s Nexus range? We’ll update this article regularly with more news and rumours.

UPDATE: It’s now out and going by the name of “Google Nexus 9“

On
26th May Google updated it’s Google I/O website. A mysterious tablet
can been seen in the main image which looks similar in size to the Nexus
7, but takes all the stylistic cues from the Nexus 10. Could this be
the Nexus 8? If so we’d be pretty upset. The rounded edges look
old-school and the side bezels are chunky in comparison to the Nexus 7.
It looks too small to be the Nexus 10, but that’s exactly what it is.
Rumour quashed. 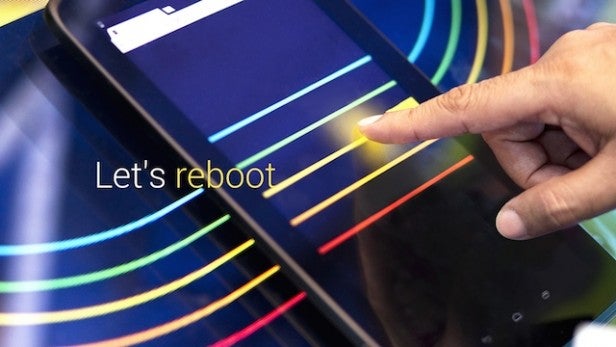 Could this be the Nexus 8? No it’s actually a slightly altered image of the Nexus 10

But how do we know a Nexus 8 is even on its way? On
12th May 2014 eagle-eyed German tech blogger Carsten Knobloch found
references in the Chromium Projects code that hint towards a Nexus 8 and
Nexus 6.
The Chromium projects include the Chromium and Chromium OS open source
projects that power the Chrome browser and the Chrome OS used by
Chromebooks. The source code mentioned the Nexus 8 but offered no
additional information. It’s a tentative case for the Nexus 8 but offers some substance to rumours.

More
recent code has fuelled that speculation. Tech community Myce uncovered
Android code refering to project named Volantis and Flounder which has
since been removed. Could these be code-names for the Nexus 5? It is
certainly possible, particularly since Google was quick to remove all
refereces once it noticed.

Does the Nexus 8 mean the end of other Nexus tablets?

Other questions that surround the likelihood of a Nexus 8 release revolve around whether we will also see a new Nexus 10 or Nexus 7
and who will manufacture these devices. Will Google stick with Asus and
Samsung to manufacture its next tablets or will it look elsewhere?

There
was no Nexus 10 refresh in 2013 although the Nexus 7 did see an updated
version get released. It is quite possible that Google has concluded
that smaller form-factor tablets are the way to go. There are plenty of
rumours and analyst opinions spreading around the internet that the
Google Nexus 8 – which could either be an 8-inch or an 8.9-inch tablet –
could take over from the Samsung made Nexus 10.

Look at the
sales figures and a strong case can be made for Google dropping the
Nexus 10 from its tablet line-up. While there is no public data of how
many Nexus tablets have been sold industry watcher Benedict Evans
has used a complex modelling system to calculate active Android users.
He estimates that the Nexus 10
only sold around 10% the amount of the Nexus 7 – or around 680k units.
While the 2012 Nexus 10 scored highly in reviews it did not sell
anywhere near as well Google
hoped it would. Neither did it make a major dent in Apple’s iPad sales.
This may be why Google chose not to target the iPad Air with the Nexus 10 2.

There
are a few companies that have made an impact in the less competitive
8-inch market. Amazon has had some success with its well-regarded Kindle Fire HDX 8.9 and so has LG with the LG G Pad 8.3. Samsung has a huge range of tablets that includes two 8-inchers – the Galaxy Note 8.0 and Galaxy Tab Pro 8.4.

Google
looks to follow suit, whether it will do so to replace its 7-inch or
10-inch tablet, or as an addition to them, remains to be seen.

Nexus 8 Release Date: When will the Nexus 8 come out?

Google
tends to release its 7-inch tablets in July while the Nexus 10 was
released in November 2012. When exactly the Nexus 8 release date will be
remains unknown.

Some rumours based on leaks from a Google Dublin employee
suggest that the Nexus 8 will be released in July 2014, shortly after
Google I/O – Google’s annual event that focusses on software rather than
hardware.

A July launch is unlikely, though, unless Google
decides not to launch a new Nexus 7, it’s hard to imagine it will cease
production of its most popular tablet, however. With just a few months
to go we
would expect to have seen many more rumours to have surfaced by now,
including more concrete information on the screen and specs. A Q3
release date, somewhere between September and November, is a more
reasonable assumption and ties in with the Christmas rush to buy
tablets. Some rumours suggest that production won’t start until July or
August which would also support this hypothesis. However, there is still
a chance that we will see an anouncement made at Google I/O on June
25th.

If the Nexus 8 is to
replace the Nexus 7, which is unlikely considering its popularity, then
an 8-inch screen is possible. If, however, it is set to replace the
Nexus 10 then an 8.9-inch screen makes more sense. We think this is the more likely scenario. With the constant
growth in Android tablet sales we think there is an opportunity for
Google to slot an 8.9-inch Nexus 8 into the range, rather than as a
replacement to either of the other tablets.

A scale representation of how an 8.9-inch Nexus 8 could stack up next to its siblings

Alexander
also added fuel to the rumours that the Nexus 8 will be made by
HTC, makers of the HTC One M8 phone. It might not be as farfetched as it
sounds. According to DigiTimes HTC turned down the opportunity to
create the first Nexus 7 as it wanted to focus on its smartphone
business and had already had its fingers burnt by the unsuccessful HTC
Flyer and 10-inch Jetstream. This left the door open to another
Taiwanese company, Asus.

It is also probable that Google will
choose to partner with a new manufacturer for the Nexus 8, particularly
if it sits in between the Nexus 7 and Nexus 10. Google has used LG for
the Nexus 4 and Nexus 5,
Asus for both Nexus 7s and Samsung for the Nexus 10. By spreading the
love Google manages to keep manufacturers happy and unthreatened, which
is also one of the reasons it sold Motorola to Lenovo earlier this year.

Who will build the Nexus 8 is not the only enigma surrounding it. Another is which brand of chipset it will use.

The
Nexus 7 2013 runs the Snapdragon S4Pro, just like the Nexus 4, whereas
the Nexus 10 uses a dual-core Samsung Exynos processor.

There are now three schools of thought on which processor the Nexus 8 will run.

The
first is that it will use a Qualcomm Snapdragon processor, just like
the Nexus 4, Nexus 5 and both Nexus 7s. The precedent exists but the
question remains would it come with the new Snapdragon 805, the 801 or the 800
found in most flagship Androids or tablets? Google tends to use solid,
but last-generation processors in its tablets to keep costs down. If it
follows the pattern then the Snapdragon 800 or 600 may well be the SoC
of choice.

Vague reports from AndroidPIT suggest that Google will choose an Intel Atom processor instead of a tried and tested Qualcomm one.

It’s the extra
graphical grunt both these chips provide that make them exciting
prospects for the Nexus 8. Using the same PowerVR G6430 GPU as the iPhone 5S means that the Nexus 8 should perform blisteringly well during intensive 3D gaming.

The third, and most recent rumour, suggests that the Nexus 8 could be powered by a Nvidia Tegra 64-bit SoC, perhaps the K1. The fact that Google appears to be racing to get a 64-bit version of its Android operating system up and running adds some credence to this rumour, but it’s just too early to know for sure.

We will update the news on which processor the Nexus 8 will run as soon as we find out more.

Nexus 8 Price: It will be more expensive than the Nexus 7

Regardless
of the processor used it is fair to assume the Nexus 8 will be more expensive than
the Nexus 7. A bigger and higher resolution screen will increase the
cost of production and this will be reflected in its price.  Rhoda
Alexander of IHS Technology says that she “would not be surprised if it
is higher than $299.” That’s $70 more than the Nexus 7 2013 retails for
but $100 less than the $399 price the Nexus 10 launched at.

We’ll update this article with more news and rumours as they happen.