Two years after the release of Pascal (and just eight months after Volta looked set to become its successor), Nvidia has now settled on Turing as the name of its next generation of graphics cards.

Although we’ve seen the professional grade Turing Quadro graphics cards, we’re still in the dark as to what we should expect from the consumer side of Nvidia’s lineup.

Sure, the cards we’ve seen so far are packed with the latest GDDR6 VRAM and more CUDA cores than you can shake a stick at, but ultimately these cards cost thousands of pounds and are unlikely to ever be installed on a home computer.

What we’re interested in are the consumer grade graphics cards that will actually be used to play a few rounds of Fortnite.

So what does Nvidia’s latest announcement tell us about what we can expect from a consumer standpoint, and what would we want to see in the consumer cards?

Let’s get the obvious out of the way first. Turing will almost certainly offer a significant leap in performance over the last generation Pascal cards.

The real question we need to ask, is how much of a leap will this be? The specs of the professional Quadro cards offer us a couple of clues.

While not confirmed, we’d be surprised if the consumer level cards didn’t offer a similar jump in performance over their last generation equivalents. 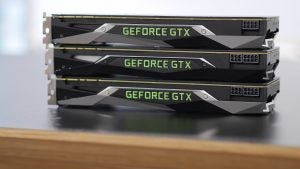 However, while it’s obvious on paper that the numbers are bigger, we don’t yet know what impact this will have on gaming performance. It’ll be faster, but we don’t yet have anything to suggest just how much faster it’s likely to be.

So watch this space. If nothing else, the GTX 2080 and the rest of the Turing lineup will run your games faster.

But the real question is what other goodies they’ll be packing under the hood.

Ray-tracing is one of those concepts that’s been around forever, but until very recently there’s been no hope of being able to use it for graphics that need to be rendered in real time.

At its core, ray-tracing changes how light is rendered. While modern games make vague assumptions about which side of a virtual object is in light and which is in shadow, ray-tracing would mean that they trace each individual ray of light to render a much more realistic scene.

It sounds like a small change, but ray-tracing can make even the most crude polygonal shapes look tangible and real, just by using realistic lighting.

This applies to Nvidia’s Turing architecture, because it increasingly looks as though the company’s new cards might be able to render ray-traced scenes in real time. Nvidia has already made a big deal of its RTX ray-tracing tech in its professional Quadro cards, and its announcement at the Game Developer’s Conference in March 2018 strongly implies that Nvidia has gaming ambitions for the tech.

A collection of next-gen ports?

As part of its announcement, Nvidia has said that the Quadro cards will support the new VirtualLink standard alongside DisplayPort 1.4 to allow you to hook up a VR headset to your PC using just a single USB-C cable.

Obviously, we have our fingers crossed that the consumer cards will be equipped with the same port, but it would also be great to see the new cards embrace the latest version of HDMI.

Sure, DisplayPort can already transmit 4K video at up to 120 frames per second and 8K at 60, but HDMI has always been the more widely adopted display standard, especially when it comes to TVs.

But that’s not the only advantage HDMI 2.1 offers. Its support for variable refresh rates means that it should eliminate screen tearing without requiring you to pay a costly premium for a G-Sync compatible display, and it also comes with support for other technologies like dynamic HDR and quick frame transport for reduced latency.

If you’re a high-end PC gaming enthusiast then it’s not just enough to have a system that runs fast, it also needs to run cool and quiet.

The problem is that while it’s easy to install a massive cooler to keep your CPU from overheating and reduce the need for its cooling fans to spin fast and loud, GPUs are a lot harder to cool without investing in the likes of an expensive custom water-cooling loop.

That’s why we’d really love to see the new Turing cards built with plenty of thermal headroom. Not only would this mean they’d run beautifully quietly at stock speeds, but it could also offer massive gains for overclocking enthusiasts, who’d be able to push them far harder without having to worry about them overheating as quickly.

Of course, we wouldn’t say no to a nice all-in-one water cooling solution either.

At the end of the day, we’d love to come away surprised by whatever Nvidia ends up announcing next week. In previous years we’ve seen it throw in fun little extras like Ansel (which allows you to take 360 screenshots from within games) or ShadowPlay (a software-based recording solution that lets you capture gameplay footage with very little impact on performance) — and we wouldn’t be surprised if had something similar up its sleeve for this year.

These are the announcements that are impossible to guess. They’re the kinds of things that you didn’t know that you wanted until Nvidia gave them to you for free with a graphics card, but quickly become fun additions that sweeten the deal.

We might have a pretty good idea about what Nvidia is going to reveal next week, but it’s always nice to be surprised by something completely unexpected.

What do you want to see from Nvidia’s Turing graphics cards? Let  us know @TrustedReviews.