When it comes to streaming services, Netflix is the undisputed top dog. However, with the hulking figures of Apple TV Plus and Disney Plus marching ever closer, and BBC iPlayer in line for a major shake-up, the pressure’s on.

Netflix is constantly testing out new features that may or may not ever actually roll out to customers. So frequently, in fact, that it can be hard keeping track of them. We’ve rounded up the biggest features and most important potential changes that you could come across in the near future.

Related: How to find 4K HDR content on Netflix 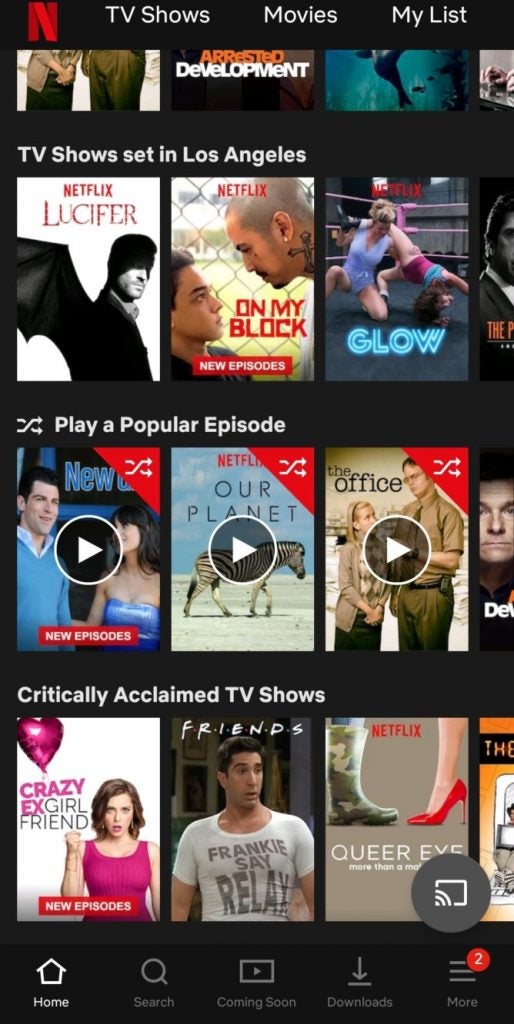 “What do you want to watch?” Netflix uses finely-tuned algorithms to surface the films and TV shows it thinks you’ll enjoy but, as we all know, it doesn’t always get it right. Which is hardly surprise, seeing as it’s a near-impossible task.

In April, Netflix confirmed that it’s testing a sort of shuffle mode feature. Some users have been seeing a ‘Play A Random Episode’ option alongside a row of shows within the main interface. When users click on some of the more popular shows in the library, the new mode (signified by a red shuffle icon) will commence playback of a random episode.

First spotted by Android Police, it appears that the likes of The Office, New Girl, and Arrested Development will be shuffle-friendly. That makes sense, given fans of those shows are sure partial to repeat viewings, so watching them out of sequence would be a non-issue.

However, given how keen Netflix is to get you watching its original shows, we’re not sure it’ll be too happy for you to keep watching the stuff you know and love from traditional television.

Top 10 lists could serve a similar sort of purpose. Netflix CEO Reed Hastings revealed in a Q1 letter to investors that the streaming service would be trialling a new feature that highlights the most popular films and series available on the platform.

“Later in Q2 we’ll be running a test to improve our UK member experience by releasing weekly top 10 lists of the most popular content on our UK service across various programming categories,” he said in April, adding that the feature would be introduced on a trial basis, and that “after a few months we’ll decide whether to end or expand the test”.

There’s no indication of exactly when the top 10 shows list will start rolling out, but Hastings’ indicated Q2 time-frame means it should land at some point between now and the end of June.

It’s also unclear if all Netflix UK users will see it, or if the service will be limited to selected guinea pigs. Whatever the case, it will interesting to see how the public reacts to the new feature – and to see which shows and films people are actually watching.

Hastings has also hinted that Netflix might be about to adopt a new look. In March, he said the service’s current UI isn’t “enough like a magazine, where it’s gloriously laid out”, according to MobileSyrup, adding that he wants it to generate more “visual interest”.

At the same event Netflix’s vice president of product, Steve Johnson, said that the grid setup currently used by Netflix is actually working out pretty well in a lot of markets around the world. However, he added: “Now that I’ve said that it’s working. I don’t think it’s working forever. And I think that we need to go deeper and we are going deeper.”

So what could change? Two potential new features Netflix says it’s exploring are film tiles that expand on Fridays, when people are more likely to watch a film; and dropping you straight into a TV episode when you fire the service up, assuming of course that that’s what your recent behaviour indicates you want.

Netflix’s first interactive show, Black Mirror: Bandersnatch, came out over the Christmas holidays, and much more is on its way.

If you haven’t yet seen it, it allows you to choose between options that appear on-screen at various points throughout the show. Your decisions will lead you to one of five possible endings. After you reach a conclusion, you’ll return to a different point earlier on in the story, and have the opportunity to choose a different storyline.

“It’s a huge hit here in India, it’s a huge hit around the world, and we realised, wow, interactive storytelling is something we want to bet more on. We’re doubling down on that. So expect over the next year or two, to see more interactive storytelling,” said the company’s vice president of product, Todd Yellin, at the FICCI-Frames media and entertainment conference in March (via Variety).

And sure enough, a few weeks later Netflix announced You vs. Wild, a CYOA TV series that will let you hang out with survival expert Bear Grylls.

One big issue, however, is that Bandersnatch is currently “only available on devices that support interactive content”. The Chromecast dongle and Apple TV are amongst those that don’t play nice with interactive content right now.

Over the past six months or so, several different subscription options have been spotted in testing − and most of the time, they’re dirt cheap.

In November, Malaysian newspaper The Star discovered a mobile-only subscription plan equating to around £3 a month. The drawback is that the plan only offers standard definition content. That said, given the differences in quality are far less discernible on smaller displays than TVs, this may be a compromise some mobile-centric viewers are willing to make.

Just before Christmas, SmartDroid reported that users based in Austria were seeing the option to pay €2.49 (£2.25) for a week of basic Netflix access. The Standard plan offering the benefit of HD video on two screens was available for €2.99 per week (£2.70), while the Premium four screen/4K Ultra HD plan was listed at €3.99 (around £3.50).

And more recently, in March, the company started offering India-based customers the same plan that was available in Malaysia for the equivalent of around £2.70 a month (via Economic Times).

Unfortunately for those of you based in the UK, these options are usually only offered in nations where Netflix adoption isn’t quite as widespread as the company wants it to be.

In fact, the opposite might be true in the UK, where it has emerged the company is actually testing higher prices.

In January, Netflix announced its biggest ever price hike, which would raise prices by between 13% and 18%. They’ll come into force in the US in May, and we wouldn’t be shocked if something similar happened in the UK in the near future. Be warned!

Do you think Netflix will always be your number one streaming site, or do you already have half an eye on its upcoming competitors? Let us know on Twitter @TrustedReviews.