Apple’s iPhone 11 is heavily rumoured to be getting a major camera upgrade, and now the specs of the new 2019 iPhone’s improved snapper may have just leaked in full.

As shared by Mac Rumours, the respected pundit is predicting that Apple will upgrade its front-facing selfie camera to a 12-megapixel TrueDepth lens.

He also asserts yet again that two of Apple’s new 2019 iPhones will feature a triple-camera system on the rear and OLED displays, while the cheaper LCD model will get a dual rear-camera setup.

In his note, Kuo writes:

“We forecast the camera upgrade will be one of the new 2H19 iPhone’s major selling points. Critical spec upgrades are as follows. (1) Rear cameras of 6.5-inch OLED, 5.8-inch OLED, and 6.1-inch LCD will likely upgrade to triple-camera and dual-camera, respectively.

“A super-wide camera will be newly adopted by the triple-camera system, which is equipped with the 12MP/1um CIS provided exclusively by Sony. (2) The front camera of all three new iPhone models will likely upgrade to 12MP CIS+5P lens (vs. current 7MP CIS+4P lens).”

The note even features something of a (speculative) iPhone 11 specs table, for those who love a good spreadsheet. 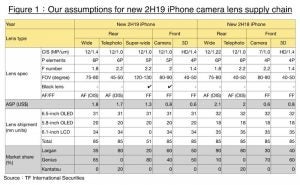 Apple is expected to release the iPhone 11 in Q3 2019, with its new iPhone launch event typically taking place each September.

That means there’s still a good few months to go until we know for sure if all these iPhone 11 leaks are fact or fiction – and we can expect plenty more rumours to keep swirling around in the weeks to come – but a consensus certainly seems to be building around this year’s new iPhone flagships featuring a tripe-camera system.

Are you excited about the iPhone 11’s rumoured triple-camera system? Let us know on social media @TrustedReviews.