A complete guide to the 2018 Gmail update

For many people, Gmail is the way to access your emails online. Now, the service’s web client is getting an overhaul, bringing a host of new security features and UI improvements. We run through what’s new with the 2018 Gmail update.

Update (June 5 2018): It’s starting to look like Google is getting ready to phase out the old version of Gmail in favour of its new redesign starting next month reports The Verge. For now the change is only for paid G Suite users, but we’re expecting it’s a sign of what’s to come for the rest of us.

Read on for everything to expect when you upgrade…

Whether you use a Gmail email account as your main email, or you’ve configured the web interface to handle emails from an alternative provider, you’re going to a lot more functionality from Google’s flagship email service.

Here’s everything you need to know about the changes, broken down by functionality, interface and security.

Here’s how to get the Gmail Update right now

Although Google is manually rolling out the update worldwide as we speak, there’s a pretty easy way to skip the queue and get it now.

To do so, simply open up Gmail and click the settings cog at the top right of the screen. From there, simply click ‘Try the new Gmail’ to switch over. You’ll be asked which inbox display you’d like the service to default to, and after that you’re all set.

Don’t like the new layout? Just click the cog again and click ‘Go back to classic Gmail’. That said, with Google having invested so much time and energy into the new layout, it’s unlikely that you’ll be able to continue using the old layout for long.

If you want to try out the new Smart Compose functionality right now, then there’s an extra process you’ll have to go through to enable ‘Experimental features’.

To do so, click the settings cog on the top right of the screen, choose ‘settings’ from the drop-down menu, and then on the ‘General’ tab scroll down to the ‘Enable experimental features’ option and tick the box.

Not everyone will be able to use Smart Compose immediately, but if you’re one of the lucky ones then it should appear whenever you’re composing an email.

The single biggest functional addition delivered by Google in the new update is ‘snoozing’. With many people using their inboxes as a kind of to-do list, being able to clear out emails and have them re-appear later has become a pretty essential feature.

As The Verge notes, snoozing has been present in third-party apps for a while now, but this is the first time you’ll be able to access it directly from Gmail itself. The feature is rolling out to the official Gmail app on Android as well.

Separate from snoozing but infused with a magic sprinkling of AI is a new feature called ‘nudging’, which calls your attention to emails that Google thinks you might need to respond to before a deadline. 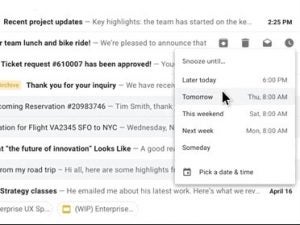 Users of Google Docs have had access to a pretty decent offline mode for some time now via the installation of a browser extension, and it appears similar functionality is coming to Gmail (albeit seemingly without the need for a separate browser extension).

We’ll have to check out the functionality for ourselves to see how it works, but we’re looking forward to one day being able to respond to a bunch of emails while offline on a flight, only to see them satisfyingly zoom away once you’re connected to the internet again.

Finally, ‘smart replies’ that auto-generate an appropriate response based on the contents of an email are making their way from Google’s experimental ‘Inbox’ app into the mainstream Gmail software.

The Gmail app is receiving fewer upgrades as part of the overhaul, but one significant change is a new way of handling notifications for the app. Again, this feature will make use of AI to only notify you of emails that you actually need to look at right now.

At the other end of the spectrum, you can also use a new unsubscribe prompt in the Gmail app to more easily stop emails from mailing lists that you signed up to years ago – without having to click through to an external website for which you may have lost your login info years ago.

Obviously, all this new functionality needs to be controlled somehow, and as such the update will result in a new look for Gmail.

The majority of the functionality detailed above is accessible through a menu that appears on hovering over individual emails in your inbox. At that point you can choose to snooze emails, archive them, delete them, or mark them as read. Emails with attachments or other content will get a slightly bigger entry in your inbox, allowing you to access this content without having to open the email first.

In addition to the new hover menu, Gmail will also have a pair of collapsible side menus. The left menu should already be familiar to anyone who’s ever used the email service, and the only change here is that it’s collapsible.

The right-hand sidebar is a bit more involved. This menu offers integration with Google’s other services – including Google Calendar – to allow you to easily coordinate between your emails and other productivity apps.

Aside from the functional improvements, everything looks a lot shinier overall. Icons fade in and out as you hover over them, and the design has a nicely muted colour-scheme that we can really get behind. 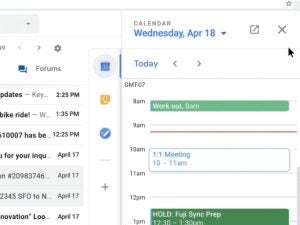 Gmail Update 2018 – What are the new security features?

Finally, and most importantly, Gmail is introducing a number of new security options. ‘Confidential mode’ includes various options to protect your outgoing emails.

You can set emails to a recipient that will expire in a certain amount of time, meaning they can’t let an email sit in their inbox indefinitely if it includes sensitive information, and you can even turn on two-factor authentication on a per-message basis, so the intended recipient has to confirm that it’s them by inputting a code from a text message before they can actually view the email.

Integrated rights management takes this control of messages a step further, by preventing a recipient from being able to block the forwarding, copying, downloading or printing of certain messages. It’s unlikely to be completely fail-safe (so maybe don’t start sending everyone your deepest secrets just yet), but it should hopefully prevent people from accidentally forwarding confidential information.

Finally, the service is also using AI to improve its detection of phishing scams. It will display sizeable warnings to prevent you from giving out your personal details to criminals.

That’s more or less what to expect from the new Gmail client. It’s unlikely that everyone will see the update immediately, but most people should see their inboxes change soon. Google has promised that the security features will be rolling out in the coming weeks.

What are you most excited to see in the new Gmail? Let us know @TrustedReviews.