The first official images we’ve seen of the Samsung Galaxy Note 10 have leaked, giving us a pretty clear idea of what to expect from the South Korean firm’s next major flagship.

As well as images of the handset, the leak − which came from the Federal Communications Commission (FCC) − reveals a 6.67-inch display and no headphone jack.

Speculated to be of the Note 10 Plus premium variant, the images below discloses the exact dimensions of the phablet in millimetres: 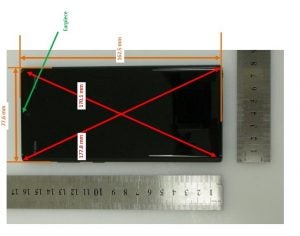 However, due to changes in the display (ditching the thick bezel of the Note 9 in favour of a cutout selfie camera), the screen sees a big increase from 6.4 inches to 6.69 inches. If you love watching videos on the biggest smartphone screen you can, this is a device worth waiting for.

Other pictures of the smartphone, sourced by XDA Developers, give a great view of the rear camera setup. Featuring three lenses in a vertically aligned module (expected to be the wide, ultrawide and telephoto sensors), there are two lenses next to this which would appear to be a depth sensor and an unidentified fifth lens. It looks like a serious arrangement, and we can’t wait to see how it will perform in our detailed camera tests. 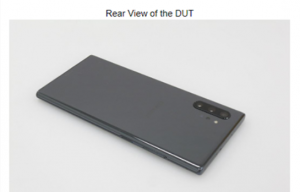 The pictures and related specifications reveal further details. There will no longer be a dedicated Bixby smart assistant button (and we doubt Samsung users will be sad to see it go), but there will not be a headphone jack (which may disappoint dedicated audiophiles).

As there’s no separate fingerprint scanner on the side or rear of the casing, it’s likely to follow in the footsteps of the Galaxy S10 and offer an in-screen fingerprint scanner. The pictured variant will not feature 5G connectivity, but it’s very likely that other devices in the Note 10 range will be ready to receive the ultra-fast new networking standard.

Shortly after its release, the Samsung Galaxy Note 10 will have to contend with two other major flagship releases from rival companies: the iPhone 11, and the Huawei Mate 30. It’s an exciting year for smartphone fans, and we can’t wait to see which device comes out on top in our reviews.