UPDATE: A Netflix spokesperson has told TrustedReviews, the limit on how many times a title can be downloaded has been in play since the feature rolled out last year. Today’s reports are likely to reflect that users are seeing them for the first time after a few months of downloading content more than once.

While 4K and HDR are undoubtedly great features for those with compatible televisions, our favorite recent Netflix feature is one almost everyone can use; the ability to download shows for offline viewing.

However, it seems Netflix is scaling back on the usefulness of the feature by adding a new restriction on how many times per year a title can be downloaded.

According to Android Police, some users have begun to see notifications informing them they only have one more download of a particular film or TV episode left. 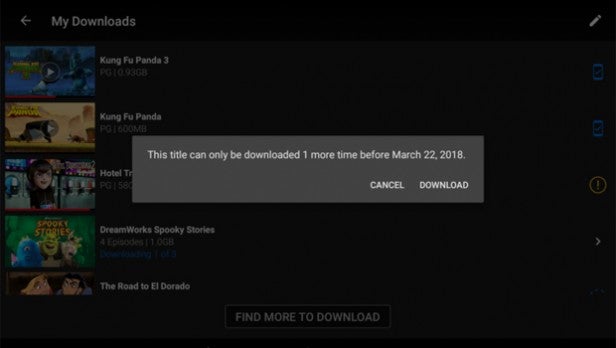 The limits seemingly vary depending on who owns the content, so those who like to rotate their favorite shows should beware.

Given that offline downloads expire after a certain amount of time (as short as 2 days in some cases) before needing to refresh (if the owner allows it), this move is probably to prevent Netflix subscribers gaining near-permanent ownership of the title.

Related: Netflix Offline Viewing – How to get the best from it

Netflix also advises that “due to studio limits, you may not be able to renew all titles. If you are unable to renew a title but would still like to watch it, you’ll need to connect to the internet to stream.”

So, the moral of the story appears to be, watch the content you download, do it quickly and don’t bank on being able to download it again.

The company has not commented on this most recent change yet, but we’ve reached out to the firm for more info.

Do you get much use from Netflix’s offline download feature? How do you feel about this change? Let us know in the comments below.