You must have heard the news by now, VR’s the future.

If it’s not HTC Vive or PlayStation VR you’ll be strapping your head into for virtual-world thrills, it’s more affordable, smartphone-utilising devices like the Samsung Gear VR or recently released Google Daydream View.

And, if you’ve got a Daydream View, your VR app arsenal just gained a serious new addition, with the brand new Netflix VR app dropping with support for the system.

Letting you enjoy your favourite Netflix-hosted shows such as Orange is the New Black or House of Cards in 360-degree loveliness, the app is free to download but, as you might expect, requires a Netflix subscription to enjoy.

It’s not all quite as glamorous as it sounds, either.

Related: Netflix vs Amazon: Which streaming service deserves your cash? 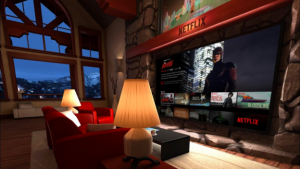 Instead of letting you look around the sets of your favourite shows as the lead characters hash things out within touching distance of your eyes, the Netflix VR app simply plonks you in front of a virtual TV, ah.

What you can do, though, is look around the bachelor pad dream that virtual telly is located in which, let’s face it, is probably a nicer view than your own living room.

Separate from the traditional Netflix app, the new VR offering comes just days after the streaming giant made its videos available to download for the first time – a feature users had been demanding for years.

Would you watch Netflix in VR? Let us know in the comments.