Smart doorbells have become one of the must-have purchases. As well as letting you answer the front door from anywhere in the world, they also let you keep a secure eye on the front of your house, doubling up as fully-functional security cameras. Here, we’re looking at the two top-sellers, as we compare the Nest vs Ring, looking particularly at the Nest Hello and the Ring Video Doorbell 3 Plus.

Before we get into comparing the specific models, it’s worth pointing out that Ring has a much larger selection of video doorbells than Nest does. While Nest has the mains-powered Hello only, Ring has many options. Battery-powered, it has the Video Doorbell, the Video Doorbell 3 (this adds extra detection features and 5GHz networking), and the Video Doorbell 3 Plus (this adds the clever pre-roll feature). And, Ring has two mains-powered doorbells too: the Ring Pro and top-end Ring Elite. As such, Ring is far more likely to have a camera that suits your property.

I have to say that the Nest Hello is the best-looking doorbell out of the two. Its rounded, lozenge-shaped body looks neat and tidy, and sits better outside of your house. It’s also more likely to fit on your door frame, thanks to the slimmer body. As the Ring Video Doorbell 3 Plus has an integrated battery, it’s a chunkier proposition altogether. Depending on how wide your door frame is, the 3 Plus may need to be attached to the corner mount. 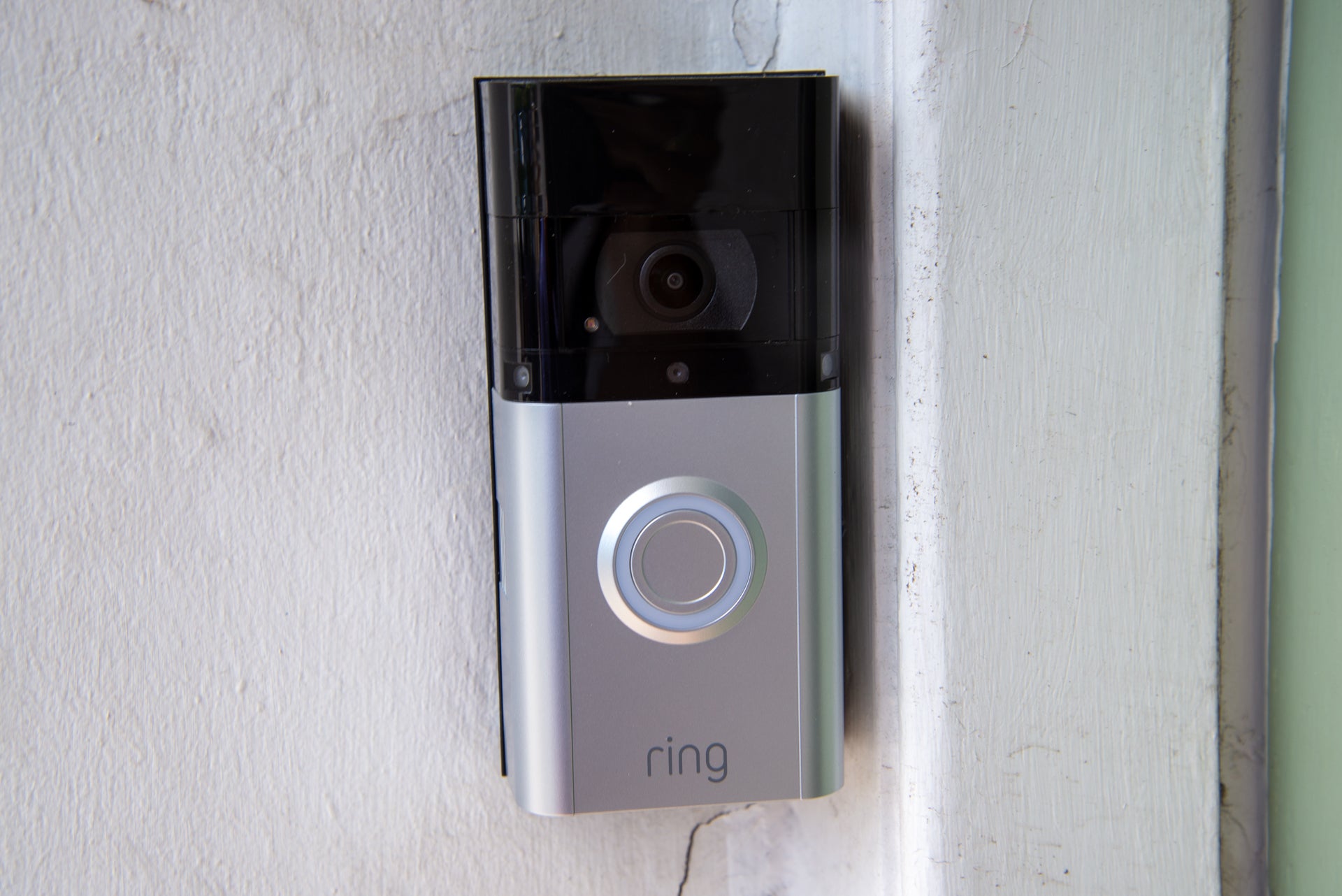 The main reason that the Ring Video Doorbell 3 Plus is so chunky is that it has a battery, while the Nest Hello does not. The advantage of Ring’s design is that you can install its doorbell anywhere without having to worry about power, whereas the Nest Hello needs a transformer and wire to your front door. If you don’t have an existing wired doorbell and don’t want to pay to have one installed, then the Ring Video Doorbell is the only choice.

The removable battery is charged via a micro-USB cable, with a single charge giving you around six to 12 months of use, depending on usage. However, if you do have a wired doorbell, you can wire the Ring into place and run it from the mains instead. This has the advantage that you don’t have to remove the internal battery to charge, and that your existing chime rings when someone presses the doorbell. 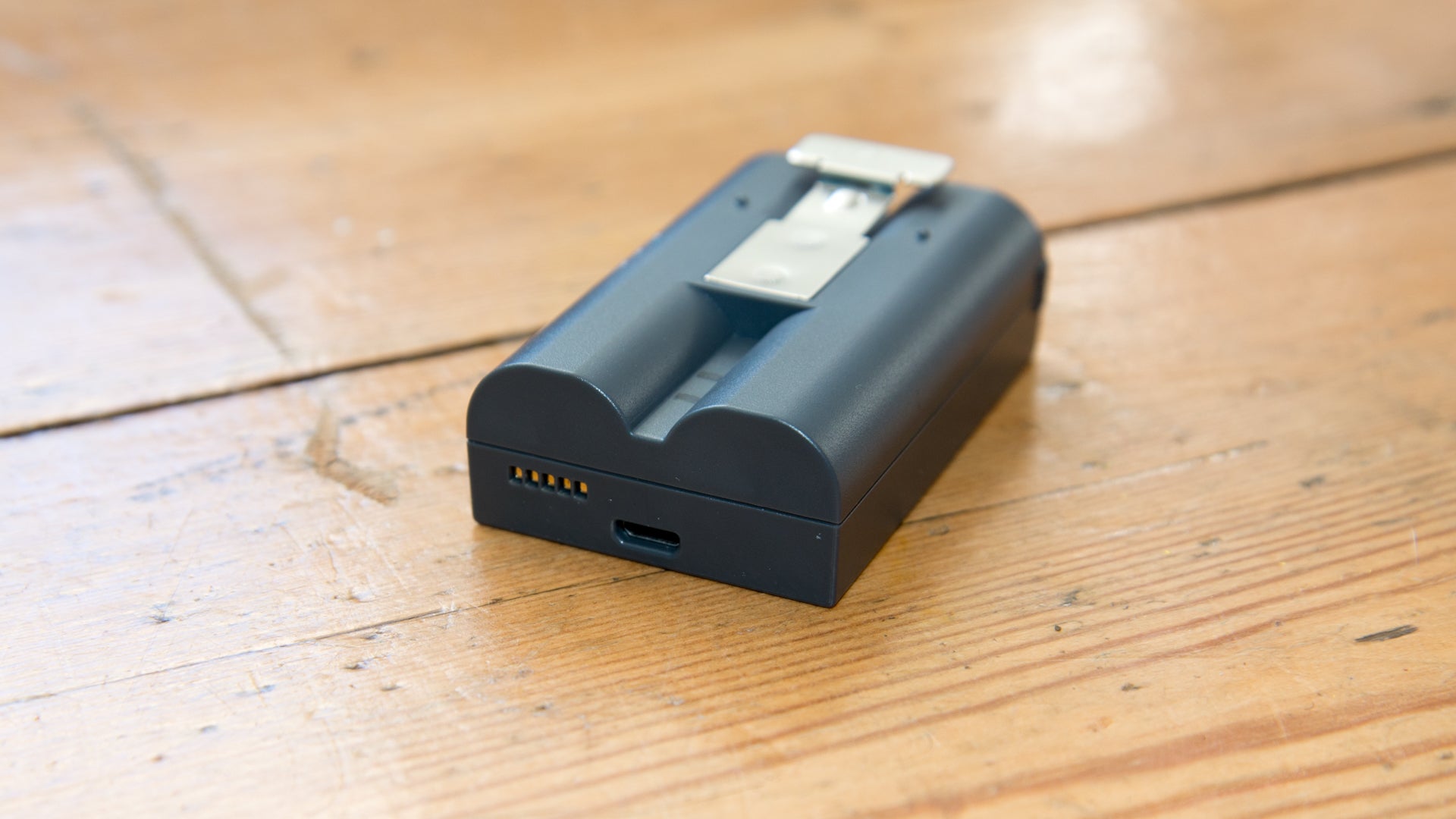 The Nest Hello must be run from the mains, which will potentially require a new transformer powerful enough for the doorbell. I had to have my transformer replaced in order to have the Nest Hello installed. This makes installation less flexible than the Ring, even where you have an existing wired doorbell.

Nest can take care of installation for you for an additional £100, which will get you a new transformer if required. The upside of going wired is that the Nest Hello is smaller and it has more powerful Wi-Fi, albeit 2.4GHz only. Once, the Nest Hello is hooked up, anyone pressing the button also rings your standard internal chime.

Ring sells indoor Chimes, with the new Chime Pro also acting as a Wi-Fi extender to give you more range on your wireless network. If you don’t have an internal doorbell, then you may want a Chime so that you can hear your doorbell ringing.

One trick that both doorbells have is the ability to announce callers via smart speakers. With Ring, you have to have Amazon Echo devices, as there’s no skill for Google Home. When the doorbell is pressed, your selected Amazon speakers will tell you that there’s someone at the door. If you have an Echo Show, you can see who’s at the door and then answer it; you can answer from an Echo smart speaker, although you can’t see who you’re talking to. 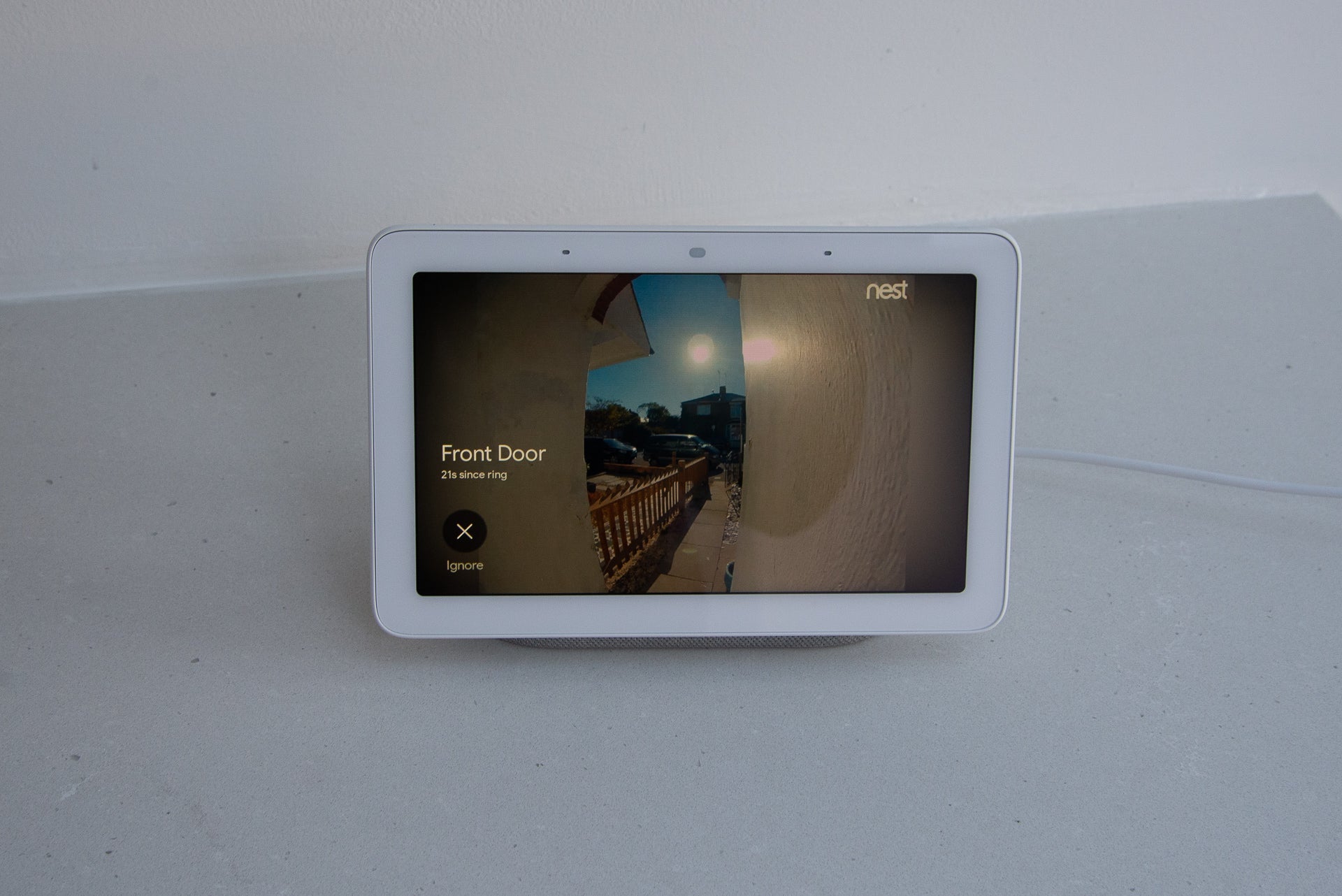 The Nest Hello has a similar range of features but this time for Google Home speakers. You get announcements on all of your speakers, although you can only answer from smart displays, such as the Google Nest Hub. Cleverly, with a smart display you can choose from the pre-recorded options, sending an automated voice response to the door, such as, “We can’t get to the door right now”. As the Nest Hello also has facial recognition, alerts tell you who’s at the door, too, which is neat. Facial recognition is shared across all compatible Nest devices. 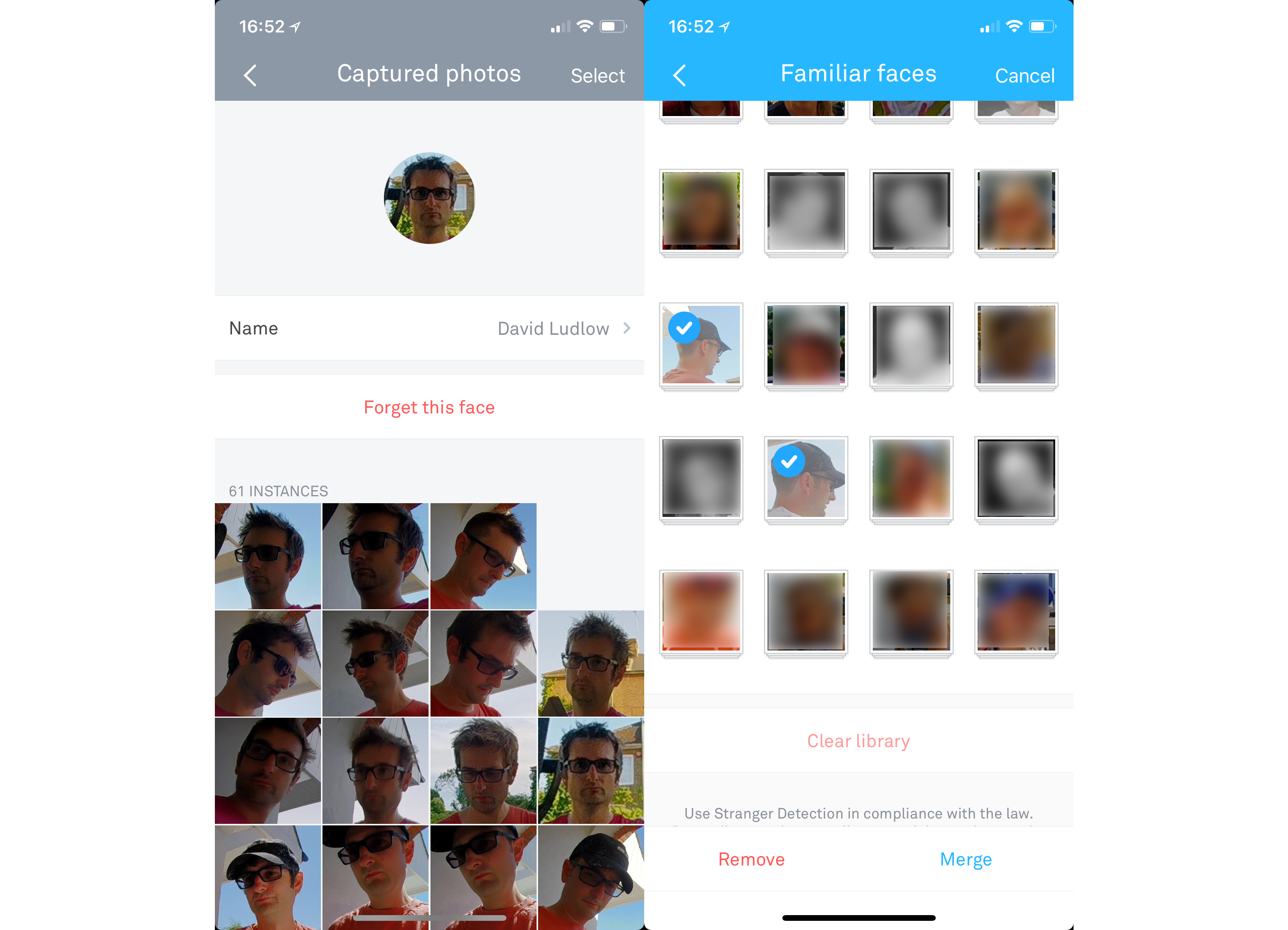 Objectively, the Nest integration is slightly neater than the Ring one, but the choice as to which doorbell you want to get is likely to come down to which smart speakers you own.

As the Nest Hello is mains powered, you get one big advantage over the Ring Video Doorbell 3 Plus: proper activity zones. These let you select the part of the picture that you’re interested in, only getting notifications and recordings when motion takes place inside a zone. For each zone, you can set up smart notifications, letting you get warned about all motion or just when a person is detected. If you live on a busy road, then activity zones make the difference between a calm existence and a flood of alerts. 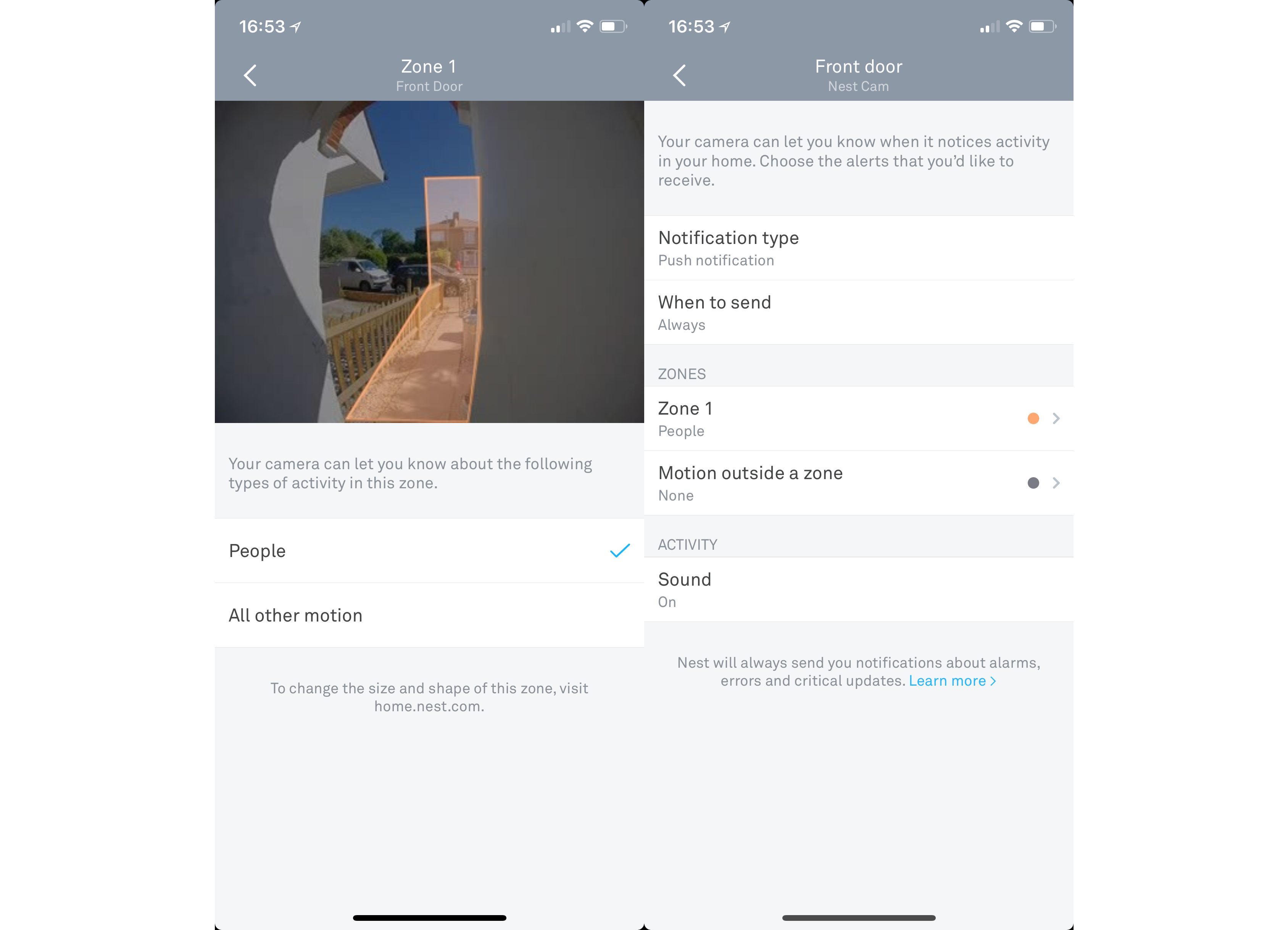 The Ring Video Doorbell 3 Plus relies on a PIR sensor. You get a fair amount of customisation on it, and can turn off sectors of the motion sensor to cut down on alerts, plus you can adjust the motion sensitivity. However, you don’t get the full array of controls that Nest gives you, so you’re likely to get more motion alerts with this system. It’s nice to see that Ring now has people detection in its cloud system, so you can cut down on the number of alerts that you get. 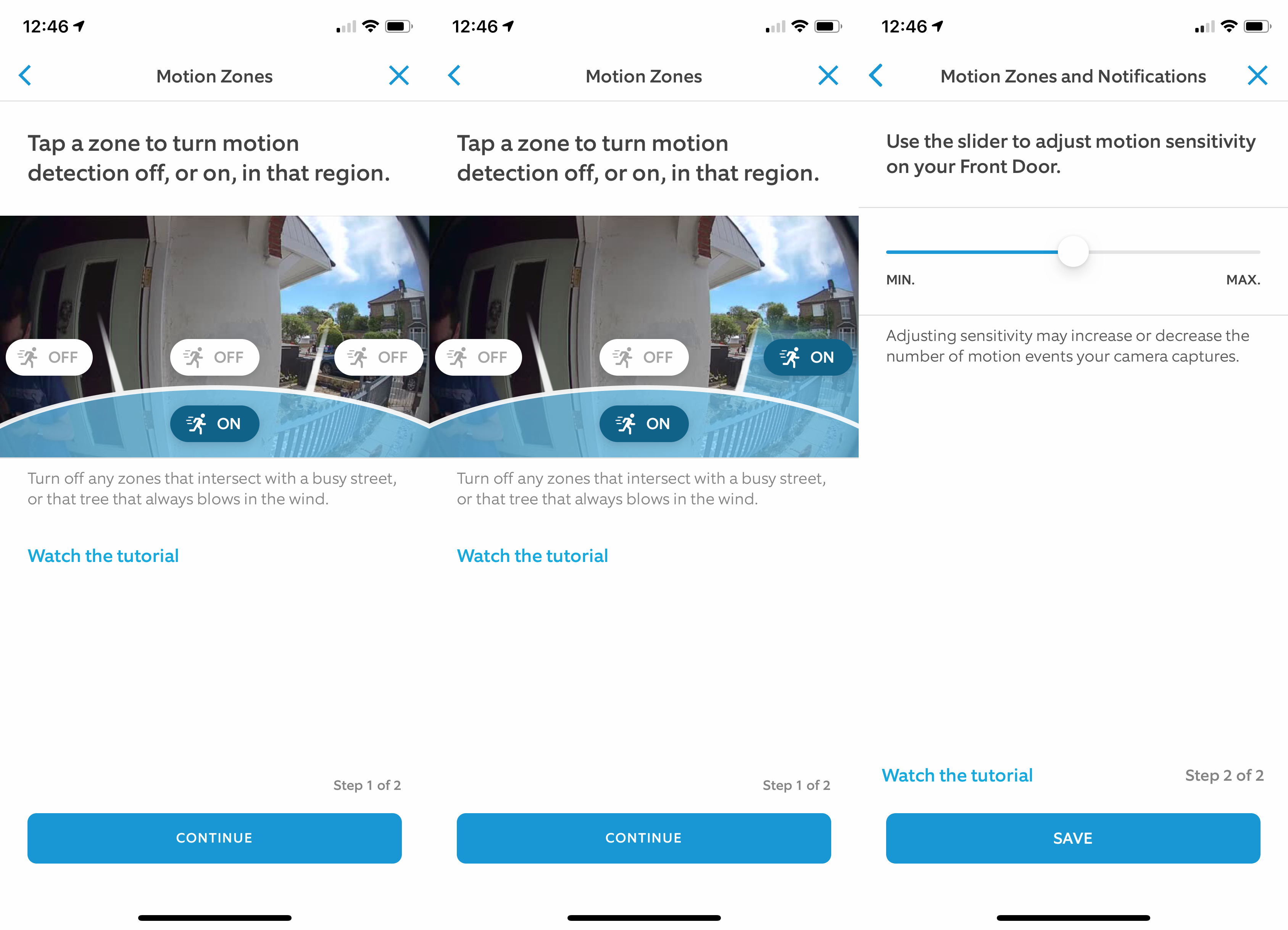 The Ring Video Doorbell 3 Plus also has pre-roll. With the older cameras, it was possible to miss a bit of action when motion was detected, due to the time it takes the camera to wake up and connect to Wi-Fi (to save on battery life, the camera is not always live). Pre-roll captures a few seconds of black and white footage at the start of motion detection event; video quality is quite poor and low-res, but it shows you exactly what triggered the motion and is a nice addition. 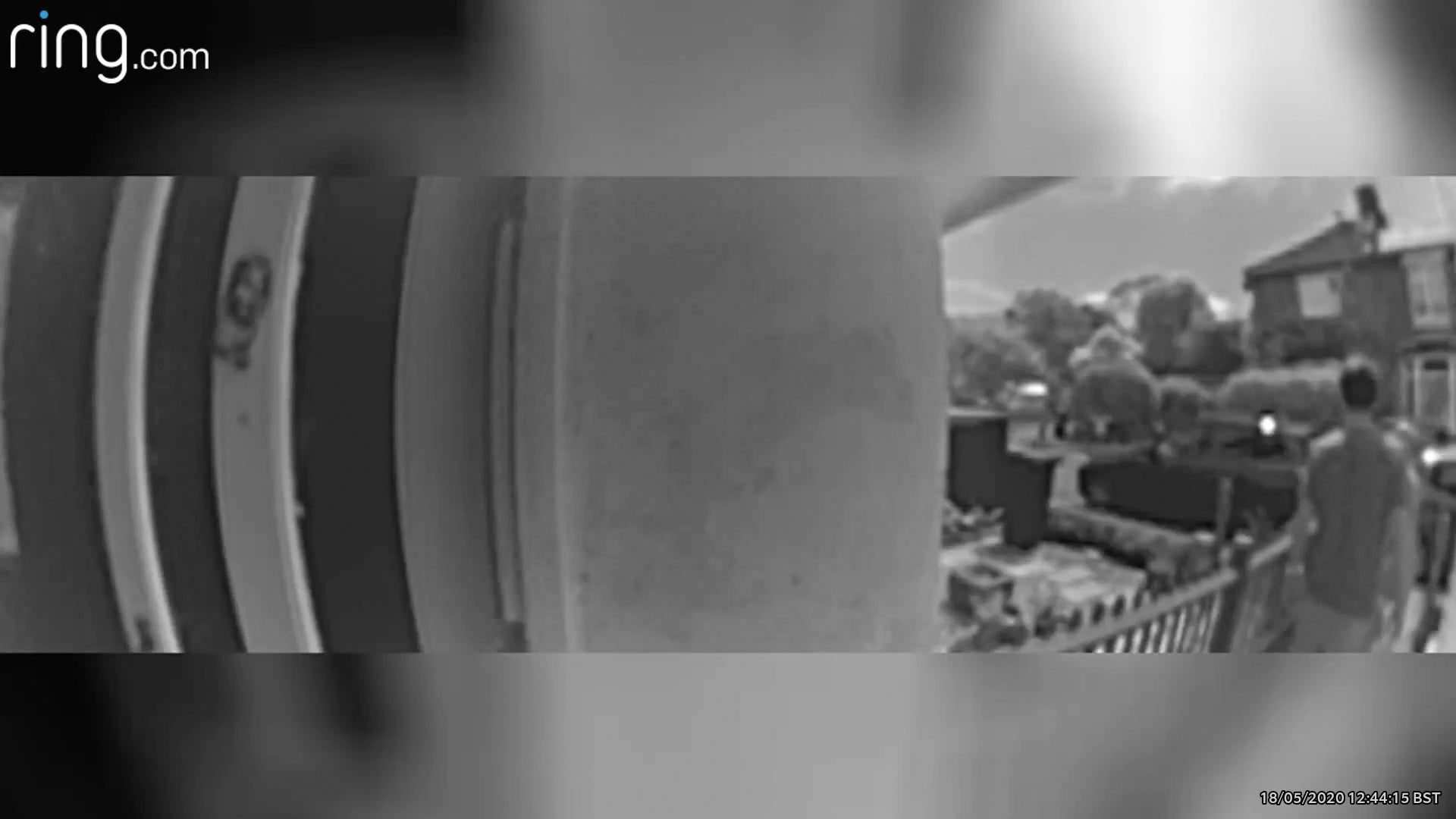 Both systems work with IFTTT, so you can build your own smart home rules, such as turning on a light automatically when either system detects motion. You can also manage your Ring cameras through Samsung SmartThings.

Both systems can be used for free: you’ll get basic motion alerts and incoming ring alerts, but you won’t get any video saved. It makes sense to upgrade to the cloud storage, so that you increase the amount of features you get. Both systems are well priced, with several options.

Nest has just upgraded its Nest Aware system (see, New Nest Aware vs Old for more details). The main takeaway is that it now costs £5 a month to cover all of your cameras, but you no longer get continuous recording (unless you pay a lot more), and only motion-triggered video is saved to the cloud, stored for 30 days. Even so, Nest has one of the best apps in the business and makes it really easy to find clips. You’ll need Nest Aware if you want facial recognition and activity zones.

Ring Protect is the cloud system that you need for your Ring Video Doorbell 3 Plus. The range of plans is wider, but there’s a good reason for this. The basic cost is £2.50 a month (£24.99 a year) and gets you 20-days of video history for one device. If you have multiple devices, then you can pay £8 a month (£80 a year), which seems expensive, but this also turns on cellular backup and assisted monitoring on the Ring Alarm system. The Ring app isn’t quite as accomplished as the Nest one, and makes finding old clips a bit trickier.

The Ring Video Doorbell 3 Plus has to wake itself up, connect to Wi-Fi and then notify your phone that someone is at the door. All of this takes time, particularly if you don’t have strong Wi-Fi at your door. I’ve had a couple of instances where an eager courier is already leaving my front door before I could answer.

Since the Nest Hello is always connected to Wi-Fi, it’s a little quicker to respond, typically taking around 10 seconds from a bell press to notify your phone. I found that my phone was noticeably quicker to connect to the Nest Hello than it was the Ring Video Doorbell.

Once connected, the Nest Hello uses a portrait video mode, which makes it easier to use on your phone. Ring uses landscape mode, so you have to physically turn your handset, which is less convenient.

In terms of being able to talk to the person on the other side of your door, both products offer similar call quality. Nest has one minor advantage with its pre-defined responses, which you can select from the app or even your Apple Watch. Responses such as “You can leave it”, to tell a courier to put the package down, or “We’ll be right there” are quite terse, but give a quick way to respond. The Ring Video Doorbell 3 has a Full HD landscape resolution with HDR, while the Nest Hello has a 1600 x 1200 portrait resolution with HDR. Side-by-side, there isn’t much between the two, with both producing clear and detailed video, where you can spot individuals clearly enough. Below you’ll see sample shots from both devices – Nest Hello first and then the Ring Video Doorbell 3 Plus. Ring just about edges it, as it’s the new product, but there’s still a lot to like about Nest’s footage and the landscape display means you see more of a person. 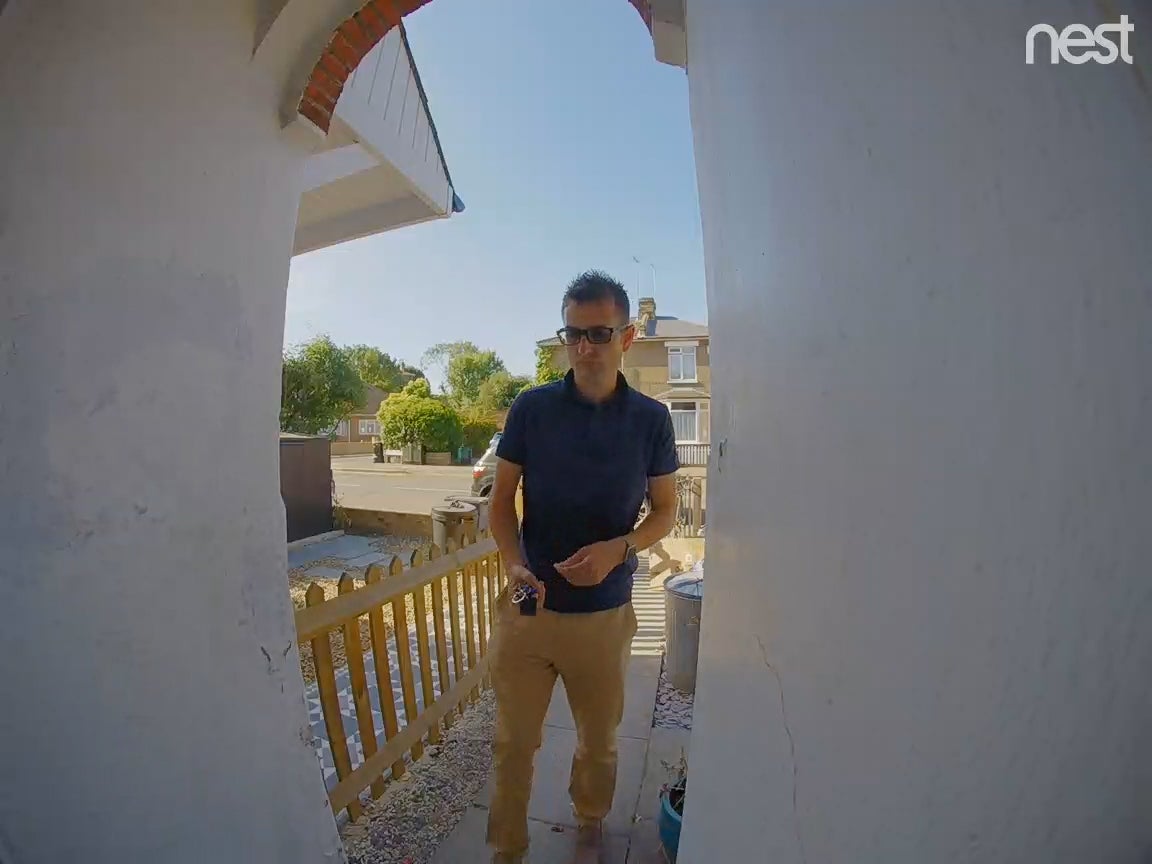 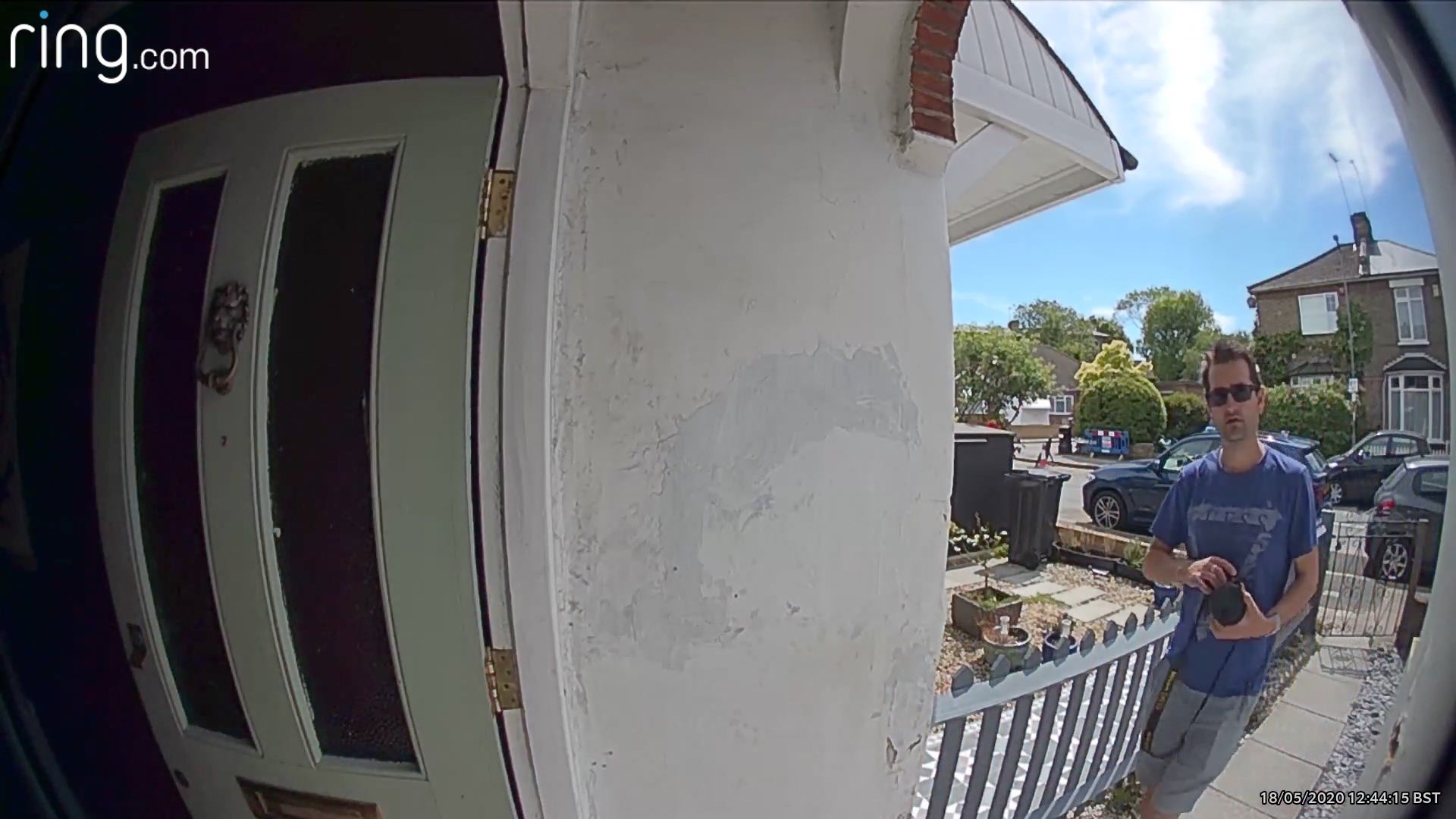 At night, both devices turn on their IR lights, clearly illuminating people that come to the door. Again, there isn’t much in it, with both doing their intended job well. 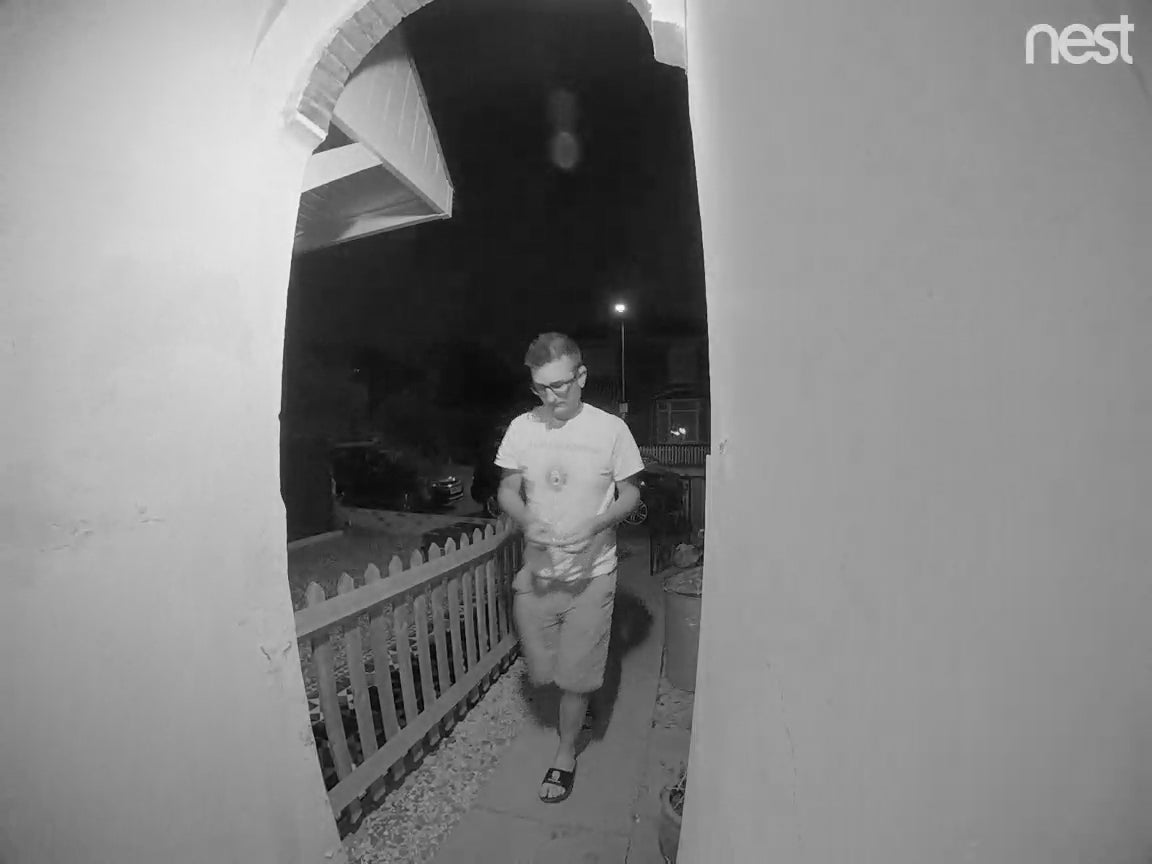 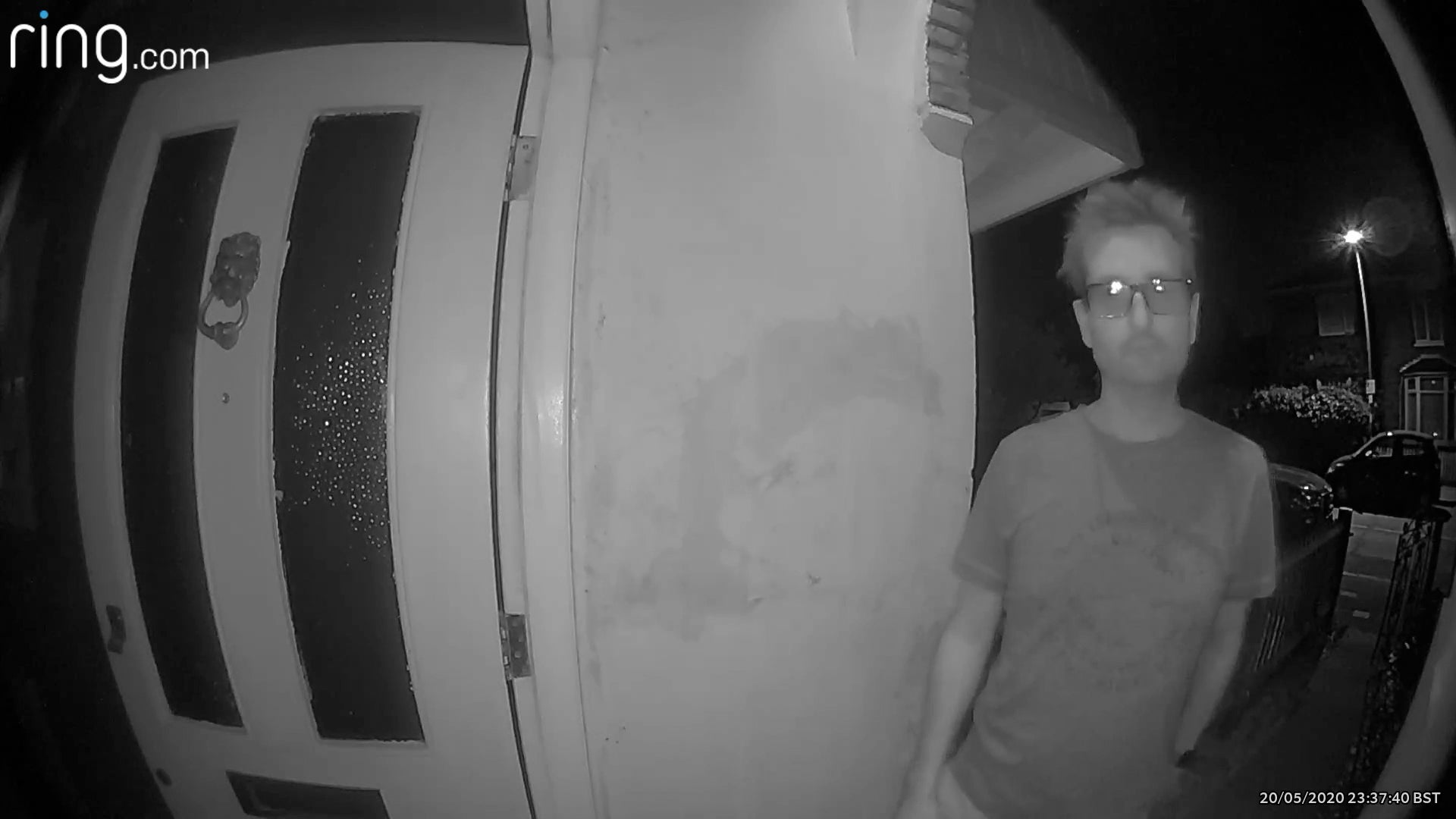 At night, IR lights let you see what’s going on but you miss out on some detail

Nest Hello vs Ring Video Doorbell 3 Plus – Which one should I buy?

From a pure tech point of view, I marginally prefer the Nest Hello. Its portrait resolution, wired design and facial recognition make it that bit smoother to use. It remains my favourite doorbell. However, the choice is more complicated than that, and the Ring Video Doorbell 3 Plus is also an excellent doorbell and the best battery-powered model that you can buy. If you don’t have or don’t want a wired doorbell, then it’s the best choice for you.

Then, you have to take into account the wider view. If you have Amazon Echo speakers, then Ring is best for you; Google Home owners should buy the Nest Hello. And, finally, there’s the wider eco-system, where Ring is the clear winner. The Ring Alarm is just about the best simple DIY alarm system, and Ring has a wider range of smart cameras to protect your home. And, if you get a Ring Alarm, you can turn your cameras on and off based on the alarm’s setting. Nest has fewer cameras to choose from and there’s not the same deep integration between devices.

If you’re planning on expanding how many cameras you have and want a smart alarm, too, then Ring wins hands down.